The mechanics of the elections

Once the seats of Myanmar's parliament are filled, the first order of business will be choosing a president.   © Reuters
Vikram NehruSeptember 10, 2015 00:00 JST | ASEAN
CopyCopied

Myanmar's electoral process had a dramatic, if shaky, start when President Thein Sein -- with the support of the military -- forcibly ousted parliamentary Speaker Shwe Mann from the leadership of the ruling Union Solidarity and Development Party, and moved his own loyal officials into place.

While the president took a back seat during that tense evening at USDP headquarters in mid-August, the move sent a strong signal that military leaders intended to retain control of the pace and direction of democratic change -- and were unhappy about the ambitious speaker's challenges to their authority.

The president and his military commander say they remain committed to holding a free and fair election. That should not be surprising. International approval of the election outcome is crucial to the country's future. It may explain why Shwe Mann -- an ex-general turned reformer who has openly courted Myanmar's democratic icon, Aung San Suu Kyi -- has been permitted to retain his seat in the legislature and his influential role as parliamentary speaker. He remains a potent political force, as seen in the defeat of a subsequent parliamentary bill that would have enabled his impeachment for failing to consult adequately on his legislative moves. Faced with serious internal rivalries, Myanmar's leaders clearly realize they can only go so far if they are to keep the elections on track and retain support of the international community.

Previous elections in Myanmar have drawn criticism -- even widespread condemnation, as in the aftermath of the annulled 1990 poll. Many expect the Nov. 8, 2015, elections to be more transparent and better run. The big question is whether they will be sufficiently fair and transparent for the world to endorse the outcome. 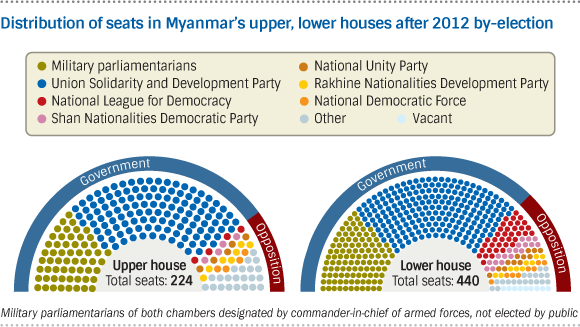 On the plus side, the military-dominated Union Election Commission -- which is ultimately responsible for organizing and managing the process -- appears to be trying. It has invited foreign and domestic election monitors and agreed on a code of conduct for civil service organizations. It is receiving advice and technical assistance from various sources, including the well-regarded International Foundation for Electoral Systems. The democratic credentials of the commission's chairman, Tin Aye, a former high-ranking general in the previous junta may be questionable although he is reportedly striving to conduct a credible poll under difficult circumstances.

The elections will be conducted in two stages. The first vote, on Nov. 8, will be under a first-past-the-post system for the national parliament's upper and lower houses, as well as for legislatures in the country's 14 regions and states. A quarter of all seats in the national parliament are reserved for military appointees, ensuring the army's continued influence in the country's post-election politics.

The second stage will be to elect the president and two vice presidents, sometime after the new parliament convenes on or after Jan. 31, 2016.

As of early September, 93 political parties had registered to take part, but only four with a national presence. Many focus on their ethnic bases, and few differentiate themselves ideologically. As in other Southeast Asian countries, politics is personalized and voters choose between parties based on their leaders. For example, voters are aware of the National League for Democracy's leader -- the charismatic Suu Kyi -- but not necessarily about the party's position on issues. 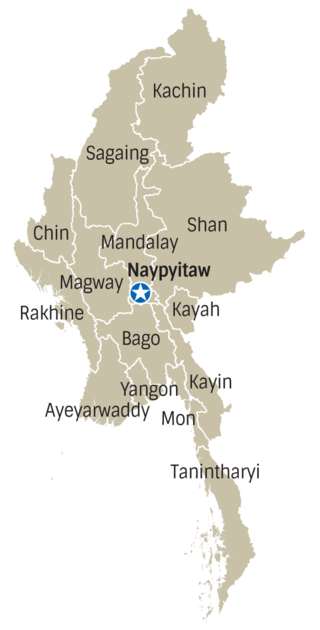 A preliminary list shows 6,189 registered candidates, of which 5,866 were nominated by political parties while 323 are independents. Actually political activity picked up before the official campaigning began on Sept. 8, 60 days before election day.

On the actual day, polling will run from 6 a.m. to 4 p.m. After that, votes will be counted in each polling station in the presence of party agents. Votes will then be aggregated at the township level, then at district, and finally at state and national levels. It will take at least two weeks before the final results will be announced in Naypyitaw.

Although these elections could very well be fairer than previous polls, there is no doubt they will have shortcomings. For example, the expiry of temporary citizenship cards and a flawed citizenship application process has disenfranchised more than 525,000 members of the Rohingya community -- or by some estimates roughly two-thirds of Myanmar's Muslim minority population of 800,000 to 1 million. Voter lists are far from accurate and the system places the burden on the voter to correct errors.

The political space for electioneering, already constrained, has been restricted further by continuing conflict in some ethnic states, rising anti-Muslim rhetoric by religious leaders and Shwe Mann's ouster from the USDP leadership. The election administration system faces significant capacity constraints, especially at the local level. In a closely contested poll, the manual vote counting and aggregation system will make the results susceptible to fraud and manipulation, although the presence of observers will help mitigate this risk. Finally, important aspects of the electoral process remain opaque and could be abused, such as advance voting, election dispute mechanisms, security arrangements and the criteria for canceling elections in specific constituencies.

Once the new parliament is in place, its first order of business will be to elect the country's president and two vice presidents under a quasi-electoral college system. The elected members of the lower and upper houses will nominate one presidential candidate each; the military appointees of both houses will nominate a third. The three candidates then face a vote by the combined houses of parliament, with the winner becoming president and the losers vice presidents.

Suu Kyi is constitutionally barred from running for president, but if her party wins the most seats, she will most likely assume the powerful position of lower house speaker. On the other hand, Thein Sein, the incumbent president and USDP chief, is highly likely to be one of the three presidential candidates. At this stage, it is difficult to tell if Shwe Mann will be a presidential contender. Much depends on whether he is able to rebuild his political capital. The military trusts Thein Sein more than it does Shwe Mann, whom it believes may have become too close to Suu Kyi and other interest groups and could, as president, weaken the military's influence.

If Suu Kyi's party, the NLD, wins a plurality of parliamentary seats -- as is likely -- then the ethnic parties, which control nearly a third of parliamentary seats, could prove to be the kingmakers. The USDP may win enough seats to fashion a majority coalition with the support of the armed forces faction and some ethnic parties, in which case the NLD, despite winning the most seats in parliament, could still remain in opposition. On the other hand, some ethnic parties -- especially those that have suffered at the hands of the military, such as the relatively important Shan parties -- could join forces with the NLD to forge a majority coalition.

There is also a small chance that a landslide victory could garner the NLD over two-thirds of the seats in parliament. Then, notwithstanding the 25% military vote in parliament, the NLD would command a majority. In this scenario, Suu Kyi could alone decide who the next president will be. She may still choose a candidate from outside her party -- perhaps Shwe Mann, whom she recently called an "ally" -- or she could reach deep into the NLD and pick a relative unknown. But the winner in such a scenario unequivocally would be Suu Kyi herself, for not only would she be the speaker of the lower house, she would also become the country's shadow president.

The world will be watching the Myanmar elections with keen interest. The international community will have to rely on the judgments of international and domestic observers and the people of Myanmar on the fairness of the electoral process before deciding whether to support the outcome.

For Myanmar's leadership, international approval will be central to attracting foreign investment and maintaining the economy's development momentum. The alternative would be too painful to even contemplate.

Vikram Nehru is senior associate and Bakrie chair in Southeast Asian studies at the Carnegie Endowment for International Peace.