HONG KONG -- Hong Kong Exchanges and Clearing (HKEx) is working to strengthen its cross-border ties. A year ago it launched the Shanghai-Hong Kong Stock Connect facility, an arrangement that has enabled investors in the two markets to trade shares on either bourse through their local brokers.

HKEx now plans to expand the program to cover commodities, bonds and other financial instruments. Although turnover in the Chinese stock markets has stayed low since this summer's plunge in share prices, HKEx hopes to solidify Hong Kong's status as a financial services hub in Asia as Beijing works to reform China's capital markets.

"With the breakthrough of the Shanghai-Hong Kong Stock Connect and the still-to-come Shenzhen connect, people now fully understand the concept of connect," said Charles Li Xiaojia, HKEx's chief executive, in a recent interview with the Nikkei Asian Review. The exchange is now looking to build on the "connect" scheme.

Prior to the launch of the Shanghai-Hong Kong Stock Connect facility, only a handful of foreign investors, namely "qualified foreign institutional investors," were permitted to trade in Shanghai. With the advent of the trading link in November last year, institutional and individual investors with accounts in Hong Kong can buy and sell Shanghai stocks. 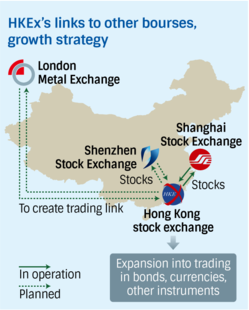 The Chinese stock market rout has taken a toll, however. Daily turnover via the link is down by more than half from its peak. Although there were plans to set up by the end of the year a similar link between the Hong Kong market and the Shenzhen Stock Exchange, which hosts many startup companies, the project may not meet the deadline. Chinese regulators fear supply and demand imbalances.

Still, Li is optimistic, saying that the bridge between the two markets is complete and that traffic between them will increase as the markets calm down.

HKEx is now setting its sights on commodities futures. During Chinese President Xi Jinping's visit to the U.K. in October, HKEx announced a program called "London-Hong Kong connect" whereby the Hong Kong Futures Exchange and the London Metal Exchange, both subsidiaries of HKEx, will establish a trading link.

In 2012, HKEx purchased the LME, which handles more than 80% of trades in nonferrous metal futures worldwide. In December last year, it listed yuan-denominated aluminum, copper and zinc futures. Critics say the move has not generated much business, due in part to the difference in trading hours.

According to Li, China is the world's largest consumer and producer of commodities. Through the London-Hong Kong link, HKEx hopes to lower trading costs and improve the liquidity of the market. It also wants to attract mainland companies and investors to the Hong Kong markets. It will probably take about a year for regulators in the U.K. and Hong Kong to approve the initiative. In the meantime, HKEx is thinking of collaborating with commodities exchanges on the mainland, such as those in Shanghai, Dalian and Zhengzhou.

HKEx is also studying a plan to process trades in bonds, as well as interest-rate and currency futures. The yuan's increasing use as an international currency -- including its likely incorporation into the International Monetary Fund's Special Drawing Rights, along with the dollar, the euro, the yen and the pound -- should deepen the market for such transactions.

"As the SDR inclusion happens, a lot of central banks will have a mandate to hold yuan, and there will be a lot of sovereign bonds [involved in] that," said Li. HKEx aims to broaden its range of yuan-denominated financial instruments, expecting growing demand from institutional investors.