JAKARTA -- Chinese-Indonesian tycoon Mochtar Riady, 86, had a simple reason for making his first overseas investment in the late 1970s in the U.S. He bought a stake in a bank in the southern U.S. state of Arkansas because "I had an idea that the warehouse of money is the U.S.," Riady said.

His web of companies, collectively known as Lippo Group, has since established a global presence, and is a big player in real estate and retail business in Indonesia. An opaque ownership structure makes reliable figures hard to come by, but Lippo Group is estimated to have over $22 billion in assets and employ around 35,000 people.

Riady says his focus now is on Indonesia, a "still empty" market of 250 million people he believes offers ample opportunities as the country builds railways, roads and seaports. A subsidiary of Lippo Karawaci, the group's core property unit, recently partnered with Japanese trading house Mitsubishi Corp. to develop real estate in the country.

After successfully running small local banks, Riady's big breakthrough came when he was recruited by the Chinese-Indonesian entrepreneur Sudono Salim in 1975 to head local lender Bank Central Asia. Riady had a successful stint at the bank, but kept his distance from Salim, a politically connected tycoon with close ties to then-President Suharto. Riady turned his focus to building his own business, which fueled his ambition to seek opportunities overseas. 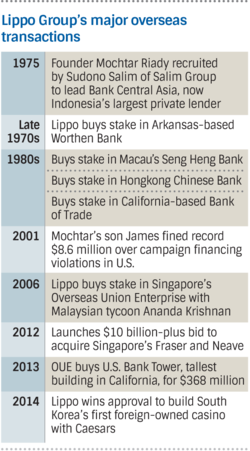 Lippo accelerated its overseas expansion in the 1980s, buying stakes in banks in Hong Kong, Macau and the West Coast of the U.S. Riady was born in Indonesia but was later deported to China, an experience he later called an advantage in building his business globally. According to news reports, Lippo was one of the first foreign banks to enter China in the early 1990s under a partnership with state-owned China Resources Enterprise.

During Lippo's early overseas expansion, Riady brought in foreign talent. Day-to-day management is handled by people of various nationalities, although Riady and his sons James and Stephen, who oversee the group's domestic and overseas businesses, respectively, make the key strategic decisions.

That overseas know-how helped Lippo Group shake up uncompetitive industries at home. Sensing an opportunity in Indonesia's underdeveloped health care sector, Lippo opened a chain of hospitals in 1996 and is now the country's largest operator. In 2010, the group sold a stake in department store operator Matahari Department Store to Luxembourg-based private equity firm CVC Capital Partners, which helped make the company more profitable. In 2014, Lippo entered the movie theater business, which had long been a monopoly.

Lippo's two core overseas units, Hong Kong-listed Lippo Ltd. and Singapore-listed OUE, are also hungry for growth. In 2012, OUE launched a $10 billion-plus takeover bid for Singaporean conglomerate Fraser and Neave. After losing out to Thai Beverage, OUE bought California's tallest skyscraper for $368 million. According to Riady, the group's overseas business is now "completely independent" from the domestic market, in contrast to other Indonesian conglomerates such as the Salim Group, which holds stakes in its Indonesian units through a Hong Kong-based investment vehicle.

Lippo's ambitions abroad have sometimes backfired. In the U.S., the group's early ties with Bill Clinton, who in the 1980s was governor of Arkansas before becoming president, raised eyebrows. In 2001, James, who was involved in the group's day-to-day operations in the U.S., was fined $8.6 million for violating that country's campaign finance rules.

At one point, Lippo had a partnership with Malaysian tycoon Ananda Krishnan in the media business, but the two parted ways due to management disputes. The legal battle between them continues.

In recent years, Lippo has teamed up with Mitsubishi's archrival, Mitsui & Co., in Indonesian Internet businesses. They jointly launched the country's first fourth-generation high-speed network in 2013 and they have recently begun building a large data center. Both Japanese trading houses may face competition for upcoming deals as Lippo tries to develop its 322-hectare township in the outskirts of Jakarta into a "smart city." Whether Lippo can manage its complex relations with its foreign partners will be a key to the group's success at home.