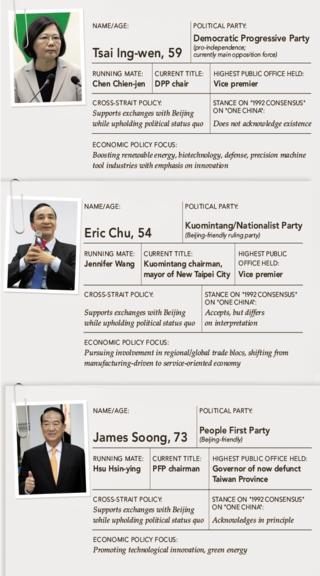 The DPP may also secure a parliamentary majority in the polls held on the same day. If that happens, it would be the first time the DPP controls both the legislature and the presidency. That scenario has cast a shadow over relations with its giant communist neighbor.

Tsai Ing-wen, chairperson of the DPP, is running against her counterpart Eric Chu of the Nationalists, also known as the Kuomintang, or KMT. The third candidate is James Soong, founder and chairman of the China-friendly People First Party, a charismatic maverick who defected from the KMT. The three officially registered as candidates in the presidential race with the Central Election Commission on Nov. 27.

THROW 'EM OUT   In a survey published that day by independent pollster Taiwan Indicators Survey Research, 44.8% of 1,006 eligible voters said they support Tsai, compared with 19.1% who favor Chu and 11.8% for Soong. Local observers suggest the DPP's lead stems mostly from the Nationalists' discredited government and internal turmoil, rather than the opposition's appeal.

"The Nationalist Party has made many mistakes, while the DPP has not really offered any constructive policies," said Liao Da-chi, a political scientist at Sun Yat-sen University in Kaohsiung. "The Nationalists' failure to turn the economy around, improve young people's employment situation and respond to their dissatisfaction voiced online worked against the party," Liao said.

In 2008, Taiwanese Ma Ying-jeou cruised to victory in the presidential election with pledges to ease longstanding strains between Taipei and Beijing, and to boost the island's struggling economy.

Ma has largely fulfilled the first pledge. Beijing views Taiwan as a renegade province and has never given up the option of using force to unify the country. Under Ma's predecessor, the DPP's Chen Shui-bian, cross-strait relations were at their worst in six decades. Ma's efforts to smooth things over culminated in a meeting with Chinese President Xi Jinping in early November, the first-ever summit between the leaders of the two sides since the 1949 civil war that split them.

Yet many Taiwanese have come to believe Ma's initiatives have only benefited big business and senior Nationalist officials. Even his would-be successor Chu has said the KMT will work to ensure the fruits of cross-strait exchanges are shared among all Taiwanese.

HIGH RISK, NO RETURN?  Ma's vision for close cross-strait trade exchanges and economic collaboration has not paid the dividends he expected. Taiwanese officials have been saying since the beginning of the year that Chinese technology companies' aggressive pricing has hurt the island's export-dependent economy. Exports have fallen for nine straight months since February, and the economy shrank 1% in the third quarter.

Chu is a reluctant presidential candidate. But in October he bowed to pressure within the ruling party to replace its first presidential hopeful, Hung Hsiu-chu, the deputy parliament speaker whose support for unification with China irked many voters and undermined the KMT's parliamentary campaign.

A political union with China is the last thing most Taiwanese want: fewer than 10% island's people support it, according to various polls.

At a time when voters are more concerned about an unequal distribution of wealth and quality-of-life issues, Tsai has played down cross-strait policy. She has said she wants to "maintain the status quo" while upholding Taiwan's democracy and freedom. She rejects the "1992 Consensus," in which the two sides agreed that there is "one China," and Taiwan is part of it.

LOOMING QUESTIONS   Tsai frequently speaks of transforming the island's economy by upgrading the tech sector and developing the biotech and defense industries. To boost her biotech policy credentials and promises to reduce the gap between the rich and the poor, she picked Chen Chien-jen, a Catholic and a leading epidemiologist, as her running mate.

On the other hand, Chu's No. 2, Jennifer Wang, a former human rights lawyer and labor minister, has been embroiled in controversy over allegations she bought cheap military housing and resold it at a profit.

The big unanswered question is how Taiwan's ties with Beijing will fare if Tsai wins in January. Although Beijing's reaction is impossible to predict, some experts foresee a compromise. "Beijing doesn't trust the DPP. [China's leaders] worry that if the DPP comes to power it will move Taiwan further from the mainland," said Shelley Rigger, a Taiwan watcher at Davidson College in the U.S. state of North Carolina.

Rigger said Beijing is aware that Tsai is unlikely to accept the 1992 Consensus, and while it is unclear what Chinese leadership is thinking, they could live with promises from Tsai not to push for independence like Chen did at the beginning of his presidency in 2000.

Political scientist Tung Chen-yuan at National Chengchi University in Taipei said that although Beijing will brandish harsh rhetoric before the elections in hopes of stealing votes from Tsai, the two sides may reach a deal after the poll. "The mainland does not have enough chips to force the DPP to completely accept its demands. Tsai is also likely to reach some compromise with Beijing," Tung said.