Asustek looks to turn itself into a mobile player

Asustek shows off its ZenWatch 2 smartwatch at the 2015 Computex exhibition in Taipei on June 1.   © Reuters

TAIPEI   Taiwan's Asustek Computer has been undergoing a wrenching transformation over the last two years, as it tries to turn itself into a leader in midprice smartphones.

It is trying to avoid being dragged down by slumping demand for personal computers, which were once the Taiwanese company's core business and still make up the bulk of its sales. With cutthroat competition in mobile phones, the company's shift is risky, but it is optimistic about growth opportunities in emerging economies. Robotics is another promising area Asustek is betting on.

In an interview with the Nikkei Asian Review, Asustek Chairman Jonney Shih said his company aims to focus mainly on mobile gadgets, with China, the world's largest smartphone market, being a key source of revenue. "We are expecting that mobile devices will generate more revenue than personal computers do in 2017," Shih said. "We aim to ship 20 million smartphones this year, and 30 million next year, so that we will become a top 10 global smartphone player. Our target is that China can contribute a quarter to a third of our total smartphone shipments," Shih said.

Shih revealed that the company has recently tweaked its Intel-based smartphones to make them compatible with China's mobile environment, which is dominated by handsets running on chips using ARM's architecture. He is hoping the change will boost the company's performance on the mainland.

According to Taipei-based market researcher TrendForce, global smartphone shipments totaled 1.16 billion in 2014, with Chinese suppliers, including market leaders Xiaomi and Huawei Technologies, accounting for about 40% of volume. While smartphones will still see sales growth in 2015 and 2016, the pace of expansion has slowed to around 10% this year and is expected to fall further in 2016.

In addition to China, Shih identified India and Southeast Asia as two high-growth areas for the company. In November, Asustek chief executive Jerry Shen said the Taiwanese smartphone maker, now No.2 in Indonesia, seeks to overtake Samsung Electronics as the market leader in the country in 2017.

DIALED IN   Asustek only entered the smartphone business last year, shipping a total of 8.5 million handsets. This is the first full year the company had a comprehensive product line.

Its ZenFone series of smartphones aspires to offer what Asustek calls "empowering luxury": the best user experience and performance for smartphones in the $150-$299 price band. 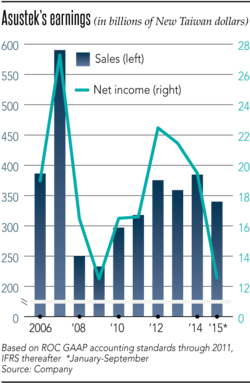 The company is also trying to make inroads in the upper midtier market by pricing its latest ZenFone Zoom handset, with optical zoom features optimized for shutterbugs, at 13,990 New Taiwan dollars ($426). It has also jumped into wearable computers with a line of smartwatches.

Like many Taiwanese tech companies, Asustek missed out on the first wave of the smartphone boom when Apple unveiled the iPhone in 2007 and saw its core PC business suffer as mobile computing took off.

Still, it has fared better than some of its domestic rivals. Acer, for example, has failed to come up with a mobile product line. Its sales have plummeted and the PC maker is struggling to turn a profit.

HTC, which once dominated the high-end smartphone market, has been bleeding money since the second quarter of this year, as a slowing global economy has sapped demand for premium Android handsets. Nor has it been able to hold its ground against Chinese smartphone brands on the mainland. That is not to say Asustek's mobile transition has been smooth. Its revenue was flat in the first nine months of this year at NT$339.61 billion, while its net profit dropped 16% to NT$12.55 billion, partly due to the continuing slump in PC sales. Its share price has fallen more than 20% since the start of the year to NT$266 as of its Dec. 14 close.

Shih is looking forward to the arrival of the robotics era, saying that compared with the "passive" devices in the Internet of Things -- that is, Net-enabled gadgets -- robots are "active" machines that can serve people better. Shih said that he is personally driving Asustek's robotics projects and that the company will unveil its first product next year, although he declined to give specifics.

The company's move into robotics technology was highlighted earlier this year when The Nikkei reported that Asustek supplied a key sensor to Japanese tech company SoftBank Group for Pepper, its humanoid robot.

The biggest test for Asustek, according to analysts, remains whether it can grab a growing slice of the mobile market even as overall smartphone growth slows and the Chinese market is dominated by domestic brands such as Xiaomi and Huawei.

"It is going to be challenging for Asustek to generate more revenue from smartphones than from PCs, which still accounted for more than 60% of the company's revenue in 2015," said Chris Wei, an analyst at Market Intelligence & Consulting Institute in Taipei.

"It is also going to be tough for Asustek to expand its shipments of smartphones by 50%, to reach the company's target of 30 million units ... next year, while we expect smartphones as a whole might only grow 10% in 2016," Wei added. He said that while Asustek may see China as a dynamic market that it needs to focus on, there are already too many players on the mainland, and that the company may find it more rewarding to cultivate Southeast Asian markets.

Vincent Chen, an analyst at Yuanta Securities Investment Consulting, said in a Nov. 11 note that Asustek faces risks on several fronts in its effort to penetrate emerging markets, including higher marketing costs, possible forex losses and slowing demand. He also said that as demand for PCs continues to slide, Asustek may further face margin and pricing pressures.

Shih said his company does not exclude the possibility of merging with other PC makers, amid speculation that big U.S. and Japanese computer brands are considering that option. He also repeated his statement earlier this year that the company views HTC as a possible acquisition target, but said, "We have to respect the other party's will," referring to HTC's previous statement that it will not consider a merger with Asustek.