Japan, France and China in three-way dance over nuclear plants

TOKYO   A complicated web of political and corporate alliances is emerging as Japan, China and France chase opportunities in the nuclear power plant business, with some partnerships growing stronger and others being tested.

One company that is learning how tricky alliances can be is Mitsubishi Heavy Industries of Japan. Areva, a French partner that has fallen on hard times, recently struck deals with two Chinese nuclear power companies. It is clearly drawn to China's massive market and relatively inexpensive reactors. 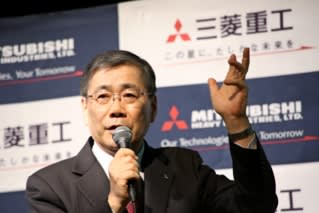 This poses a challenge not just for Mitsubishi Heavy but also the Japanese government, which has made nuclear technology exports part of its national policy agenda.

LONGTIME PARTNERS   First, the background. Shunichi Miyanaga, Mitsubishi Heavy's president, met with Philippe Varin, Areva's chairman, and Jean-Bernard Levy, CEO of French utility Electricite de France, or EDF, in Tokyo in early October. The three discussed ways to engineer a turnaround at Areva, which in June slipped into a state of virtual bankruptcy. For the fiscal year ended December 2014, the company posted a record net loss of 4.8 billion euros (about $5.3 billion at the time). It is expected to remain in the red in 2015, for the fifth straight year.

Things reportedly grew tense when Miyanaga, Varin and Levy talked about what to do with troubled reactor subsidiary Areva NP, including ownership ratios.

EDF, which is 80%-owned by the French government, has set out to rescue Areva and plans to take a 51-75% stake in Areva NP. When it all shakes out, Areva and EDF are expected to hold nearly 70% of the business. Mitsubishi Heavy, which has worked with Areva for nearly a quarter of a century, has shown interest in acquiring the remainder.

Speaking to reporters at an earnings briefing in Tokyo on Oct. 30, Miyanaga said, "It is better to have a capital relationship in bringing together technologies to help [Areva NP]. I believe this is an investment that is fully recoverable." This was the first time he had openly referred to buying into Areva.

Areva is bleeding red ink, in large part because of the development of European pressurized reactors. These reactors are designed to be efficient and last a long time, but the project has been plagued by a series of problems.

Miyanaga remains unfazed. "I am not worried about Areva NP," he said. "I don't see any potential risk." One reason for his confidence may be the Atmea 1, a midsize pressurized water reactor with a power output of 1.1 million kilowatts. It was developed by a joint venture, called Atmea, between Mitsubishi Heavy and Areva NP.

Atmea has won a contract to build four reactors in Turkey; a feasibility study is underway. In addition, the joint venture is negotiating with Vietnam.

For Mitsubishi Heavy and Areva, Atmea is key to their strategy for tapping emerging markets. This jibes with Japanese Prime Minister Shinzo Abe's growth strategy, which includes promoting exports of infrastructure. The reactors in Turkey are estimated to cost about 2 trillion yen ($16.4 billion) in total -- making the endeavor one of the world's biggest nuclear power projects. The Abe government is determined to make it a success at all costs, so in addition to Mitsubishi Heavy executives, many government officials are pushing for an investment in Areva NP. There appears to be another factor motivating Miyanaga: the decommissioning of nearly 40-year-old nuclear reactors across Japan. The reactors to be scrapped include Kansai Electric Power's Mihama Nos. 1 and 2 units as well as Kyushu Electric Power's Genkai No. 1 unit. These pressurized water reactors were built by Mitsubishi Heavy, but the company needs to deepen its decommissioning expertise. And given the difficulty of building new reactors in Japan after the meltdowns at the Fukushima Dai-ichi power station in March 2011, the conglomerate sees decommissioning as the next pillar of its nuclear business.

Areva is well-versed in decommissioning procedures and technology. Miyanaga likely sees the investment as a way to access that know-how.

Chinese nuclear companies, however, have nudged their way in between Mitsubishi Heavy and its French partner.

BUDDING ROMANCE   In Beijing, Chinese President Xi Jinping and French President Francois Hollande on Nov. 2 signed a memorandum of cooperation that included a capital partnership between Areva and China National Nuclear Corp., or CNNC. Hollande's aim is not simply to bail out Areva NP with an injection of Chinese capital but also to tap the Asian giant's surging demand for nuclear power plants. 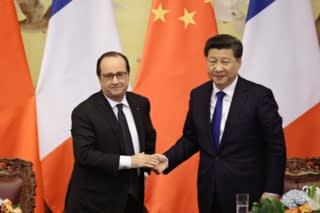 China accounts for 40% of the roughly 70 nuclear plants currently under construction around the globe, according to industry statistics.

The China-France deal was struck just days after Miyanaga talked about investing in Areva NP. It clearly puts Mitsubishi Heavy at a disadvantage, since the Japanese company has not signed any investment memorandum with its French counterpart.

There had been signs of this France-China courtship. On June 30, another Chinese nuclear reactor manufacturer, CGN Group, inked a memorandum of cooperation with Areva and other companies. A few weeks earlier, Japanese government officials had visited France and been told that Areva would not strengthen its ties with China's nuclear industry.

In early July, a fuming senior official of Japan's Agency for Natural Resources and Energy demanded an explanation from an Areva Japan official. The official retracted the company's previous statement.

Nobuo Tanaka, former executive director of the International Energy Agency, is sounding the alarm. "If Japan doesn't say anything, China will take over the market," he said. "Japan has to review its nuclear plant business strategy."

EDF and Areva are already building reactors, Taishan Nos. 1 and 2, in China's southeastern Guangdong Province. EDF and two Chinese companies, including CNNC, have also committed to a joint investment in nuclear plants in the U.K.

This came as a surprise to industry watchers. The Hinkley Point project features EPRs, a source of Areva's financial trouble. Xi announced that Chinese state-run companies would make a huge investment to revive the effectively stalled power plant project.

LIKELIHOOD OF LEAKS   Varin's extensive connections in China have Japan's government worried. Since jumping into the nuclear industry in 2015, he has quickly made use of that Chinese network.

This does not mean Varin and the French government want to ditch Japan in favor of China. It seems they want to partner with Chinese nuclear plant makers that can build cheap reactors in emerging markets, in addition to using the Atmea 1. At the same time, they would like to work with Mitsubishi Heavy on replacing and repairing equipment for France's nearly 60 reactors. They trust the Japanese manufacturer's safety and quality standards.

Tomoko Murakami, senior economist at the Institute of Energy Economics, Japan, said Mitsubishi Heavy is "already in a situation where it can't say no to Areva about investments [in Areva NP] by both Japan and China."

If Areva takes bailouts from both sides, Mitsubishi Heavy's prized nuclear technologies -- reactor vessels, steam generators, cooling systems and other components -- could leak. Miyanaga has said he will strive to protect the Atmea technology, but Murakami argues there is no way to prevent an outflow of technology to China.

The midsize Atmea 1 reactors do not compete directly with the large EPRs but they do have roughly the same output as China's Hualong 1. China says it developed the Hualong 1 on its own, but the reactor is based on Russian technology. There is some Areva technology in there as well, according to a former official of Westinghouse Electric, a group company of Japanese conglomerate Toshiba.

Experts say the Chinese reactor lags far behind the Atmea 1 in terms of sophistication, including safety features. But the IEE reckons that Hualong 1s built in China cost about half the price of the Atmea 1.

The U.K. intends to introduce the Hualong 1 at the Bradwell plant in southeastern England. In November, China also won an order from Argentina. Despite these victories, Chinese manufacturers know that cost effectiveness alone is not enough -- they need to improve the reactor's safety and overall quality.

Mitsubishi Heavy is caught between the Chinese challengers and the Japanese government, which likely still wants it to invest in Areva NP. One Mitsubishi Heavy executive, though, thinks Miyanaga is willing to do what it takes to safeguard the company's future, even if it means causing a rift with Areva.

One example: Mitsubishi Heavy's comprehensive collaboration with French power and gas company Engie. The pair signed a memorandum in October.

Engie, formerly known as GDF Suez, is the world's second-largest supplier of electricity and gas. It has a hand in Mitsubishi Heavy's Turkish nuclear project. "If the relationship with Areva falters," another company executive said, "I think Mitsubishi Heavy will work with Engie in tapping nuclear plant markets around the globe."