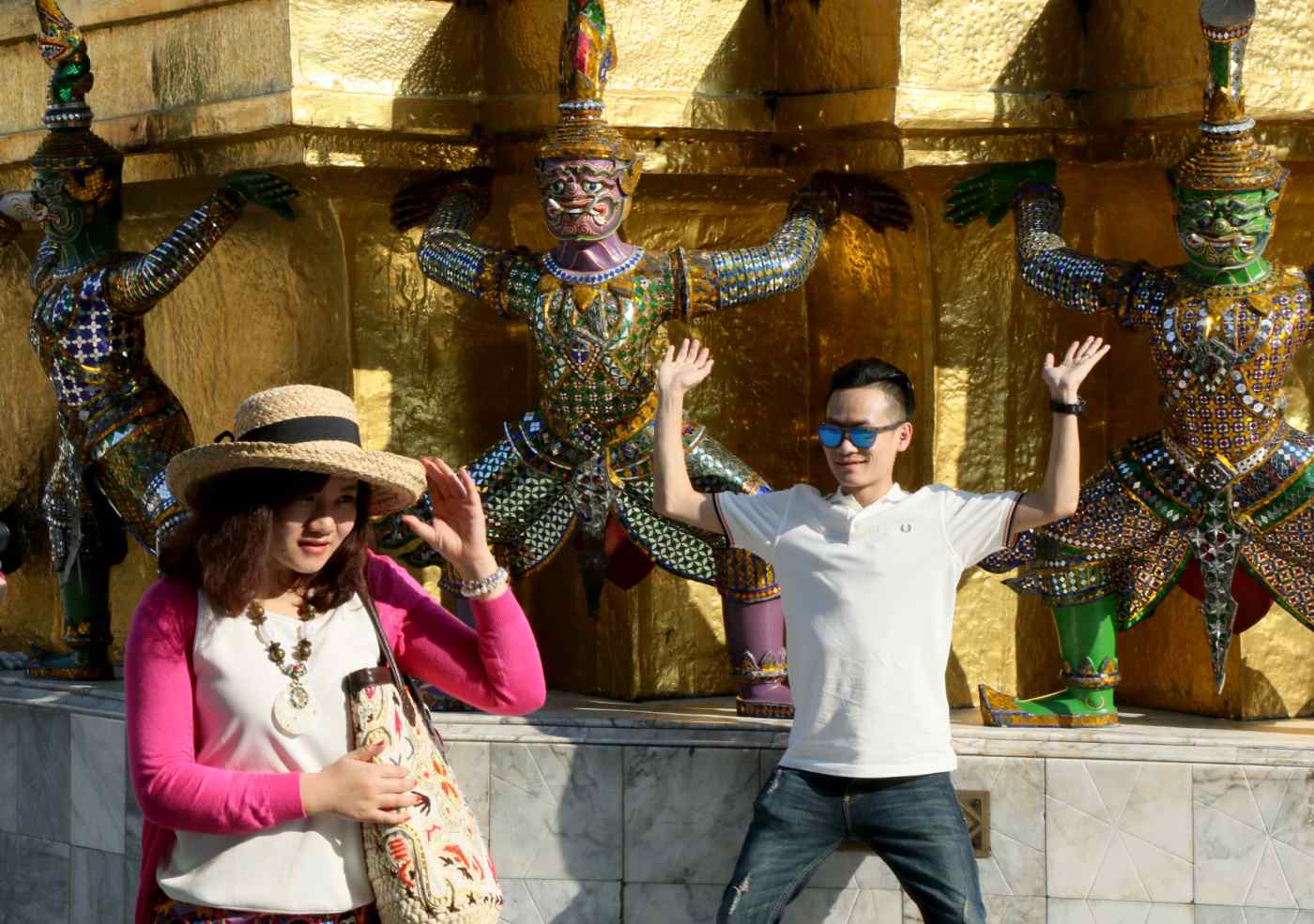 BANGKOK   It is early December and the Spring Airlines flight from Shanghai to Bangkok is full. The budget carrier flies to the Thai capital twice daily, and the passengers on this flight are predominantly mainlanders making their way to China's favorite Southeast Asian holiday destination.

Chinese airlines like Spring make scores of trips each week to Bangkok, Chiang Mai and Phuket. But it is not just Thailand that is benefiting from rising Chinese outbound tourism. From Myanmar to Malaysia, the impact of these travelers' cash is being felt far and wide.

"There is enormous growth in outbound Chinese tourism numbers right across the region," said Mario Hardy, chief executive of the Pacific Asia Travel Association. "However, the choice of destination for Chinese travelers can change rapidly based on local events. Everyone wants their fair share of the 100 million-plus per year Chinese outbound travelers, and therefore, marketing spending from national and regional tourism boards targeting the Chinese market is increasing year on year."

Chinese tourism patterns can change quickly and dramatically because 80% of the tour groups that make up the bulk of outbound traffic are controlled by just five booking agencies, according to Hardy. These agencies change their itineraries on the fly, reacting to government travel guidance and political spats.

In recent years, Chinese travel to the region has been affected by anti-China riots and diplomatic tension with Vietnam over offshore oil exploration, a spate of deadly assaults in the Philippines, street protests in Bangkok and the disappearance of a Malaysia Airlines plane en route to Beijing. But countries that have suffered a fall in arrivals are all hoping to benefit from Chinese New Year travel.

China has two peak holiday seasons, or "golden weeks" -- one around Chinese New Year in January or February, the other around the country's Oct. 1 National Day. This year, more than 6 million Chinese were expected to travel within Asia over the New Year period, according to a survey by Ctrip.com International, the country's leading online travel booking site. 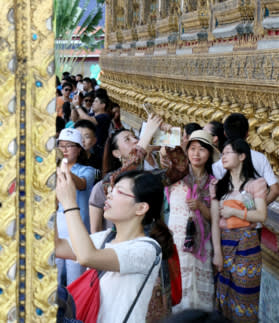 Wat Phra Kaeo, a Buddhist temple in Bangkok, is one of the most popular spots for Chinese tourists. (Photo by Shinya Sawai)

Thailand, so far, has been the top destination for the Chinese middle class and topped the Ctrip survey. Travelers are drawn by the country's warm weather, reasonably priced accommodation, cheap shopping and friendly people. The number of Chinese visitors to Thailand surged 71% on the year in 2015, to 7.9 million.

Despite a bombing in central Bangkok that killed three Chinese citizens and that has been blamed on two members of China's Muslim Uighur minority, China did not join 20 other countries in issuing a warning on travel to the country. As a consequence, while arrivals to Thailand from many key markets declined in the following months, Chinese visitors continued to grow in number, though at a much slower rate. Total arrivals for the year still beat the Tourism Authority of Thailand's target by 800,000 and a China Travel Service official said Chinese New Year bookings were 10-20% higher this year than last.

Chinese visitors also stay longer in Thailand than they do elsewhere in the region. In 2014, the average length of a visit in Thailand was 7.88 days, compared with 4.34 days for Chinese visitors in Singapore and 3.3 days in Hong Kong, according to PATA data.

FANNING OUT   Indonesia has also benefited from a steady increase in Chinese visitors over the last 10 years, though the influx has not been quite as dramatic as in Thailand.

A decade ago, the number of mainland Chinese visitors to the archipelago numbered only around 100,000 annually. The figure reached 926,750 in 2014 and likely passed 1 million last year.

Cambodia is also fast emerging as a Southeast Asian magnet for Chinese travelers, who flock to the ancient temples of Angkor Wat, near Siem Reap. The country welcomed 629,786 in the first 11 months of 2015, up from 560,335 for all of 2014. Last year, the country's tourism minister, Thong Khom, set a bold target of 2 million visitors from China by 2020.

Malaysia, however, has suffered a fall in numbers since the unsolved disappearance of Malaysia Airlines flight MH370, which was carrying more than 150 Chinese nationals.

Chinese arrivals in 2015 plunged 53.4% to 751,383, the lowest level since 2007. Hoping to boost the figure to 2 million this year, Malaysia has introduced visa waivers for Chinese arrivals and tax incentives for tour operators.

The fall in air travel into Malaysia has had an impact on hotels. The average occupancy rate for upscale Kuala Lumpur hotels was flat last year, compared with 2014. With new hotels set to open this year, owners are not optimistic about room rates.

"We are feeling the double pinch of fewer customers from China and the hit to the oil and gas industry" from low crude prices, said a salesperson at a five-star hotel in central Kuala Lumpur.

Adjoining Singapore has felt the Malaysia downtrend, as Chinese tours traditionally combined the two countries. But Singapore's numbers have bounced back, with Chinese visitors in the first 11 months of 2015 up 21.2% from the year before, to 1.94 million. The recovery was especially strong in the second half of the year despite deepening concern about China's economic woes, thanks in part to travelers coming for conferences and meetings.

"As the Chinese economy slows down, three-star hotels like ours have enjoyed demand from more cost-conscious Chinese travelers," Umemura said. "For the Lunar New Year holidays in early February, more than half of our rooms have been booked and paid for by Chinese groups."

After a tough 2014, the Philippines is also enjoying a recovery. A spate of criminal activity targeting Chinese resulted in an official warning against travel to the country two years ago. But Chinese arrivals picked up again in 2015: In the first 10 months of the year, they increased 17.4%, to 415,678.

Hotel operators have felt the rebound in traffic, said Margie Munsayac, president of the Hotel Sales and Marketing Association. "It's slowly picking up."

The latest country to be hit by falling numbers from China is Vietnam, where the tally for the first 11 months of 2015 was just 1.6 million compared with 1.95 million for all of 2014, when Beijing issued a travel warning amid anti-Chinese violence.

As the Chinese middle class grows in size and spending power, most countries in the region are focused on drawing its attention. To that end, Thailand, Indonesia, Vietnam and Malaysia have eased visa requirements. But PATA's Hardy warns that the sheer number of Chinese tourists could overwhelm local facilities.

"The surge of Chinese tourists is also creating both hard and soft infrastructure problems for many countries," he said, referring to a shortage of midrange hotels as well as transportation bottlenecks in some areas.

In terms of soft infrastructure, a lack of Chinese language skills is a problem in several Southeast Asian destinations. Indonesia is encouraging tour guides in top tourist areas to learn Mandarin, a move that officials claim has been fruitful.

In Singapore, attracting manpower to cope with increased tourism has been a struggle, although that has not stopped the city-state from aggressively promoting itself.

"Countries and cities in the region have to make sure they don't fall into the trap of attracting too many visitors too soon," Hardy said, adding that tourism growth "needs to be sustainable." 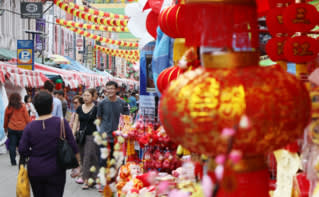 The Chinatown in Singapore is crowded with Chinese tourists and local shoppers preparing for the Chinese New Year. (Photo by Shinya Sawai)

Analysts said that the depreciating yuan could slow the growth in outbound tourism, but for now, the weakening Chinese economy has not dampened the appetite for regional travel.

"Historically, a depreciating currency has had an impact on tourist arrivals, so expect to see some slowing in the growth of Chinese tourist numbers during 2016 in Thailand, due to the falling value of the renminbi," said Lavanya Venkateswaran, an economist in Singapore at investment bank Nomura, referring to the yuan by its other name. "Overall, however, we still expect to see tourism as one of the bigger drivers of [Thailand's] growth in 2016."

Mak Swee Wah, Singapore Airlines executive vice president for commercial, was equally confident. He said in November that bookings from the Chinese market were "holding up" despite economic concerns.