Eyeing China, US and Japan aim to keep the space station aloft

TOKYO   When the U.S. and Japan agreed recently to extend the use of the International Space Station until 2024, four years longer than initially planned, it was partly out of concern that mothballing the ISS as scheduled would leave China as the only country with a manned space station.

The station, construction of which began in 1998, is operated jointly by the U.S., Russia, Japan, Canada and 11 European countries. Japan has spent roughly 890 billion yen ($7.43 billion) on the ISS so far. For that price, it has been able to conduct tests in the Kibo experiment module. However, some in Japan have complained that the science performed in the space lab has not produced results sufficient to justify the massive cost. 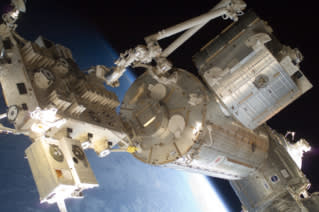 Japan's Kibo space lab is one of the modules used by the International Space Station.

Nevertheless, Japan went along with the U.S. on the Dec. 22 decision to extend the life of the space station until 2024. Russia -- whose rockets ferry astronauts, equipment and supplies to the ISS -- and Canada, with its expertise on the facility's robotic arms, are both expected to agree to keep it open.

Although not part of the ISS program, China played a role in keeping it aloft. China launched its space program by making use of technology from the Soviet Union and later Russia. It put up its first satellite in 1970 and sent its first manned spacecraft, the Shenzhou 5, into orbit in 2003. Those feats were followed by the landing of a lunar probe in 2007 and the launch of the BeiDou Navigation Satellite System, a Chinese version of the GPS system, in 2010.

If all goes according to plan, China will put up the main section of its Tiangong space station as early as 2018. It will send the other sections into orbit in pieces and assemble them, aiming to open the station by 2020. Construction of the Tiangong is to be completed around 2022. China says it may then allow astronauts from other countries to stay at the station or dock laboratory modules there.

Germany is moving toward working with China in space development, and European Space Agency astronauts have started learning Chinese, according to a Japanese expert in the field.

If the ISS shuts down in 2020, China will become the only country to have a working manned space station. That would encourage other countries interested in the final frontier to turn to Beijing for help. A China-led space alliance would be a heavenly analogue to the Asian Infrastructure Investment Bank -- and would likely get just as cool a reception from Washington.

It would both boost China's international influence and raise the possibility that military technologies from Europe or elsewhere may find their way into Chinese hands. Better technology, in turn, would enhance China's spacefaring capabilities, creating a positive feedback loop, attracting more countries to China's space program.

NATIONAL SECURITY ANGLE   Major powers rely on communications and surveillance satellites to ensure their national security by, for example, keeping an eye on the missile launches and troop movements of potential adversaries. This makes space assets a prime target in any military conflict between great powers. The U.S. and Japan are thus eager to limit China's access to space technology with military applications.

Civilian space programs after World War II have also been intertwined with national security for most countries. In the U.S. and the Soviet Union, intercontinental ballistic missiles and warhead re-entry technologies were inseparable from those developed for commercial space applications. The desire to spy on enemies was another driving force behind satellite launches during the Cold War.

In Japan, by contrast, post-World War II demilitarization led the country to focus solely on civilian applications. The national security dimension was added only recently, with the introduction of the government's third space development blueprint in January 2015.

Kimiya Yui, a Japanese astronaut who worked aboard the ISS, drew attention in Japan because he was a former Air Self-Defense Force officer. This was a first for Japan, although it is common for U.S., Russian and Chinese astronauts to have military backgrounds.

Japan's decision to go along with the U.S. move to keep the ISS open was not taken merely for the sake of science or to keep its most important ally happy. At its core, it was about the fierce rivalry among big powers for military supremacy in the 21st century. For Japan, as for the other contestants, national security is a key consideration when it comes to space.