Japanese craft beer is finding a warm welcome away from home NAKA, Japan   With 99% of the local beer market dominated by five major makers, it's little wonder that Japan's craft brews don't always get the recognition they could at home.

But it's a different story in overseas markets, where Kiuchi Brewery is busy writing its own chapter of growth.

MADE TO SHIP   Sporting an iconic owl mascot and bold, English-heavy labels, Kiuchi Brewery's Hitachino Nest line of beers is often mistaken for imports by Japanese drinkers. And yet it is their "Japanese-ness" that has helped make these beers a hit elsewhere in Asia.

In Singapore and Bangkok, it is not difficult to find restaurants that offer Hitachino Nest on tap, and locals are lapping it up.

"Japanese ingredients like local rice and malt mean the beer goes well with Asian food, unlike the same kind of imported Western beer," said a 29-year-old Thai man who has been a big fan of Hitachino Nest since he first came across it at a restaurant in Bangkok. In his opinion, "Hitachino is a mixture of East and West." According to the National Tax Agency, Japan had 173 craft beer makers as of March 2014. A survey from corporate credit researcher Tokyo Shoko Research in 2015 showed at least 22 makers export their wares.

Kiuchi has partnered with about 30 foreign distributors, and Hitachino Nest is now sold in more than 30 markets. Its total overseas annual sales volume is 3 million bottles (330ml per bottle), or roughly 1,000kl. That's an impressive figure, considering that 77% of Japanese craft beer makers produce less than 100kl a year, according to the National Tax Agency.

Kiuchi's headquarters is in Naka, Ibaraki Prefecture. Located two hours from central Tokyo, Naka is typical of smaller Japanese cities: It has a population of just 54,000, and there are no tall buildings to interrupt the view of houses, farms and rice fields.

From the outside, Kiuchi's office and factory have the appearance of a traditional wooden building. The people and the facilities inside, however, are anything but old-fashioned. The factory is mostly automated, and the staff, wearing owl-emblazoned jerseys, welcome guests for tours.

Indeed, the company has a history of adapting to change.

Taking advantage of the locally grown rice and clear water, the company was founded as a sake brewer in 1823. It entered the beer market in 1996, two years after the Japanese government relaxed the regulations on beer production. The move was spurred by the company's realization that Japan's sake market was going to shrink.

Owing to the deregulation, the number of Japanese craft beer makers increased from six in 1995 to a peak of 251 in 2004. While other breweries focused on the domestic market, Kiuchi, anticipating the day when Japan's craft beer boom would slow, had its eye on the international market from the start. It began exporting to the U.S. in 2000 and gradually added distributors in other countries, including Australia, the U.K. and Singapore. Awards from international beer contests along the way helped boost its recognition among distributors.

JAPAN-MADE   "What foreigners want is a beer that is made in Japan and made by Japanese," said Toshiyuki Kiuchi, the company's director and a member of the eighth generation of the founding family. Of the 600 tons of beer malt it uses in a year, 50 tons are from neighboring farms. It produces several unique flavors, such as red rice, ginger, local tangerine and yuzu citrus. 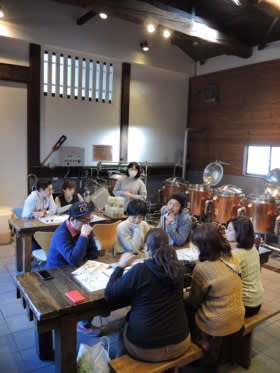 "We are making a product to be sold in the global market," Kiuchi said. "It is meaningless to sell what [Japan] already has," he added, implicitly criticizing major beer makers that have tried to export their domestic offerings as is.

The Hitachino Nest Red Rice Beer, for example, has a rich, sweet taste that lingers on the tongue. While this is unlikely to go well with a traditional Japanese meal, it apparently pairs well with spicy dishes. According to Toshiyuki Kiuchi, the brewery comes up with the ideas for all its flavors internally. "We don't listen to others," he said.

This year, the company plans to expand further in Asia and the U.S. The company and a local distributor have jointly established a brewery in Hong Kong, each holding a 20% and 80% stake, respectively. The venture is slated to start brewing at the end of March.

The brewery plans to open its first overseas beer restaurant in San Francisco in April. The restaurant will offer not only beer but also wagyu beef and soba (buckwheat noodles). A similar restaurant is slated to open in Shanghai in June. The brewery is also looking to add canned beers to its lineup to tap opportunities in other industries, such as airline and railway catering. Rival craft beer maker Yo-Ho Brewing, which produces the popular Yona Yona Ale brand, sold a 33% stake to major Japanese beer maker Kirin Holdings in 2014 to secure cooperation in procurement and marketing. Other major beer makers, such as Suntory Beer and Sapporo Breweries, have also entered the craft beer market. In such an environment, collaboration with a major player presents one option for a small or midsize brewery to expand.

Kiuchi told the Nikkei Asian Review that his brewery has received buyout offers from two big foreign beer makers. If the company is keen to secure further growth in the global market, it might be time to find a strong partner, though Kiuchi did not appear interested in becoming just another bottle on a big brewery's shelf.