Diplomats knew who he was, and some politicians welcomed him and his plans to make their countries rich on the proceeds of hosting offshore financial accounts for wealthy foreign companies and individuals seeking to reduce their tax bills.

But a few raised questions about his activities. In 2000, he replied to this reporter in New Zealand when asked whether tax havens were morally justified, "There is a big gray zone, there is no clear-cut area."

Some light has now been thrown on the gray zone by the Panama Papers, the leak of 11.5 million documents from Mossack Fonseca's files. 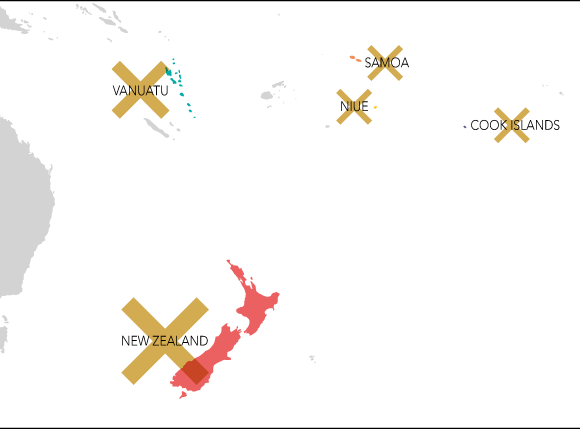 By the time Mossack turned his attention to the South Pacific, the Cook Islands, Vanuatu and Nauru were already in the offshore financial sector business. Nauru had 450 "banks" registered to a single government mailbox through which $70 billion of Russian mafia money passed in 1998, according to statements by the Russian central bank.

Mossack bypassed those islands after reaching a 20-year exclusive deal in 1996 to handle offshore incorporations for Niue, a dependency of New Zealand. "We figured that if we had the exclusivity, we would avoid the price wars because in offshore jurisdictions there is a lot of competition going on," Mossack said in 2000.

Niue, which has a population of less than 1,600, received $100 a year from each of the 6,000 international business companies set up by Mossack Fonseca over eight years. Local lawyer Peleni Talagi, daughter of the current prime minister, became the firm's agent, working out of one of the few commercial buildings in Alofi, the capital.

By the late 1990s, Niue's activities were attracting attention from bigger economies, represented by the Group of Eight and the Organization for Economic Cooperation and Development. The U.S. State Department's 1999 International Narcotics Control Strategy Report said, "Niue's thriving offshore financial sector has been linked with the laundering of criminal proceeds from Russia and South America."

In March 2000, Mossack visited New Zealand, which was trying to close his Niue business down. Foreign Minister Phil Goff refused to meet him.

While on the trip, Mossack denied to this reporter that his Niue companies were laundering criminal receipts, saying his business involved people "trying to avoid paying taxes in their home countries." Money laundering could not be carried out in Niue, he said, because it did not have a banking system. "Without the banking system, it is impossible to launder money," he said.

According to data compiled from Mossack Fonseca's files by the International Consortium of Investigative Journalists, the firm's use of Niue as a tax haven peaked in 1999.

International pressure on Niue continued to grow after that, with credit card networks instituting a block on usage on the island, threatening its small tourist industry. In 2004 Mossack Fonseca packed up its operations in Niue, though the island still ranks as the fifth most-used tax haven by the firm since 1977, according to the ICIJ's calculations.

Mossack Fonseca relocated some 600km north from Niue to Samoa, taking advantage of local legislation on international financial operations that had been in place since 1987.

Samoa ranked as the sixth most-used tax haven by Mossack Fonseca. On April 11, the Samoan government confirmed that the firm was one of 10 licensed trustee companies in the country. It said the sector complied with international standards and "made assurances that Samoa will redouble its efforts to ensure Samoa cannot and will not be used by money launderers and tax evaders."

Samoa, however, has not always been so cooperative, according to documents cited by the Australian Financial Review, a member of the ICIJ team. The newspaper quoted a 2007 letter from the chief executive of the Samoa International Finance Authority to Mossack Fonseca saying, "As you are aware, we have been deliberately stalling the proposals from OECD countries to enter into Tax Information Exchange Agreements."

Samoa eventually signed a series of such agreements in 2009 and 2010, but some foreign officials have complained about slow responses to requests for information under these pacts.

The Mossack Fonseca leak has caused an uproar in New Zealand, which was also used as a tax haven for firm clients, including the Maltese energy minister and the prime minister's chief of staff. New Zealand boasts of one of the easiest company registration systems in the world and offers foreigners the ability to set up trusts that are not taxed on earnings generated outside the country. Geoffrey Taylor from his own website five years ago

Gerard Ryle, the Australian journalist who leads the ICIJ, told a radio interviewer that New Zealand had become a "soft touch" for people hiding money. "It is a very nice front for criminals," he said.

Ryle cited the example of New Zealander Geoffrey Taylor and his son Michael who specialized in creating and then selling shelf companies in New Zealand and other tax havens through a company registered in Vanuatu. "The Taylors, when you dig into the Panama Papers, they were a huge user of Mossack Fonseca," Ryle said. The most-used Taylor nominee was Stella Port-Louis, a young Seychelloise woman. In 2012, she held the unusual honor of being a director of 338 New Zealand-registered companies.

The highest profile shell company created by the Taylors was SP Trading, which according to flight records chartered a Georgia-registered cargo plane to fly 35 tons of North Korean arms to Iran. It was stopped in Bangkok on Dec. 12, 2009. The beneficial ownership of SP Trading has never been established.

New Zealand Prime Minister John Key has defended his country's company registration system, but after days of negative news reports, has conceded reforms might be called for and appointed an independent expert to review the country's foreign trust laws after initially rejecting the idea.

"The advice we get is that New Zealand has full disclosure, has a good regime and is doing things professionally," Key told reporters on April 11."But if there are changes that need to be made, [the] government will make them."

Key himself came in focus on April 12, when a regular update of legislators' financial interests indicated he had a previously undisclosed account with a New Zealand trust provider; however a spokesman later clarified that the account was one that had been declared earlier, then was moved when the trustee changed companies.