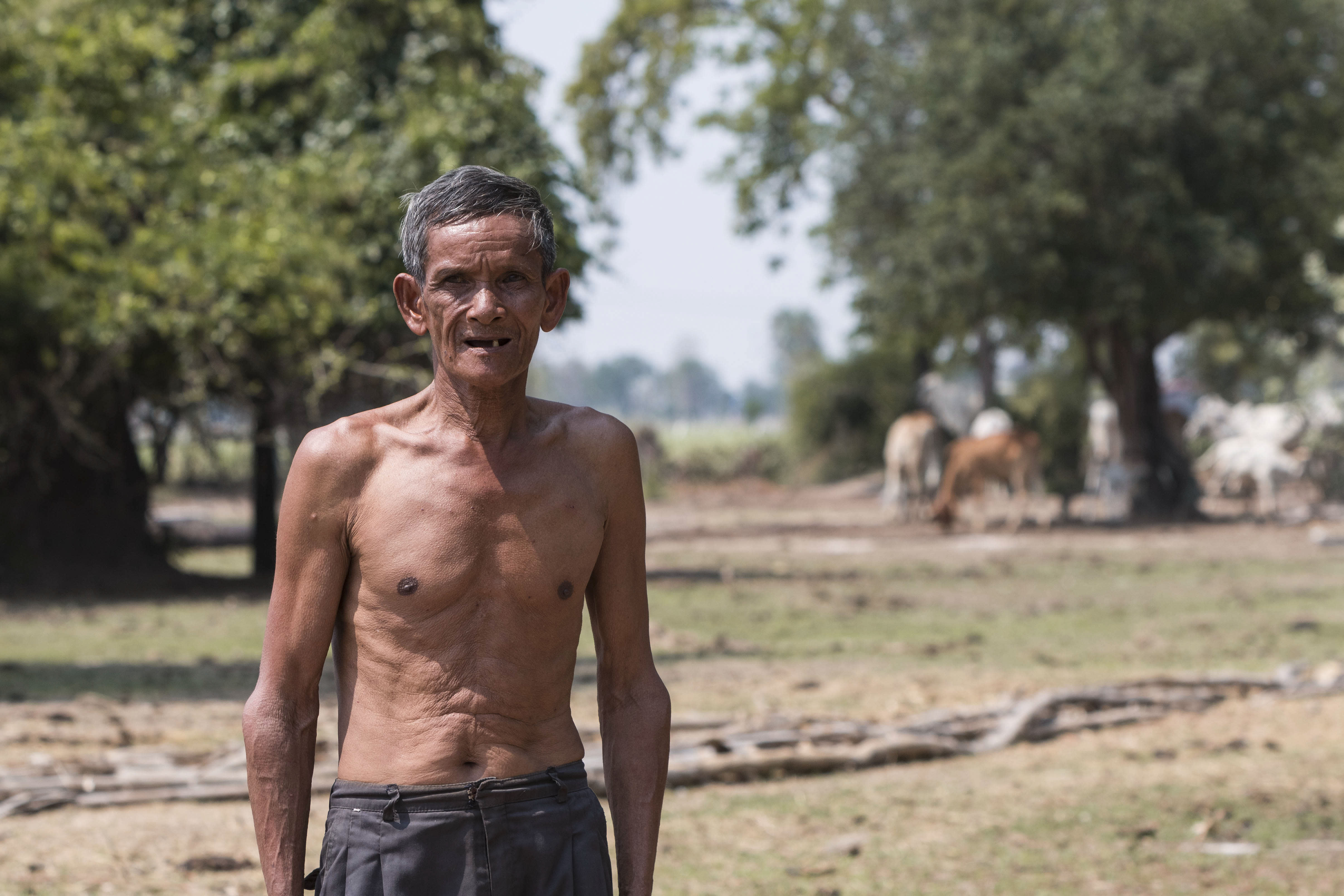 In Suphan Buri, rice farmer Sanan Phagnguen, 68, has started raising cattle because the drought made it impossible to grow a second crop. (Photo by Adryel Talamantes)

KHON KAEN, Thailand Trucks packed with sugar cane raise clouds of dust as they cross a flat, parched field in northeast Thailand. The stout brown stalks they carry are among the last to be harvested outside Khon Kaen, the region's largest city. But this year's crop in Asia's biggest sugar-exporting nation is leaving a bitter taste in the mouths of sugar farmers, due to a devastating drought.

"I had to replant my sugar field after the first crop dried up because of the drought," said Rawee Phokheng, a 67-year-old farmer. "I had no choice but to go to the money lenders for me and my family to cope." Water shortages are creating hardship in his village of Ban Pa Mak Faen, populated largely by rice and sugar farmers, near Khon Kaen. The taps here produce water for just one hour a day, starting at 6 a.m., for the 350 households. In previous dry years, tap water flowed for four hours a day. But the village is more fortunate than others nearby, which have not received water from their taps for weeks.

People are growing desperate to find water for basic needs across parts of Thailand, where nearly 30 of the country's 77 provinces are in the grip of the worst drought in 20 years. The reservoir at the Ubolrat dam, the largest source of water in Khon Kaen Province, reflects the impact of the El Nino weather pattern that is being blamed for the drought. Since March, it has been in a state of "dead storage," which means the water level has sunk below the dam's pumps for water distribution.

To meet their water needs, some villages have been digging wells with the help of government funds. The fortunate have hit aquifers after digging deeper than in previous years -- 40 meters in some cases. But those supplies may soon run out, as the water table has been tapped for farming since the drought began late last year. "Not every village can have access to underground water, and not everywhere can you get clean water because of high salinity," said Buapun Promphakping, professor of sociology at Khon Kaen University. The pain is being felt in other Southeast Asian countries as well.

In Vietnam, nearly 140,000 hectares of the Mekong Delta -- the key rice-growing area -- are bone dry. The fields there have also been contaminated by salt water, which flowed in from the sea as the once-mighty river dropped to its lowest level since 1926.

"If it doesn't rain enough, we are going to quit growing rice this year," said Ho Minh Phuc, a farmer in the Chu Se District of Gia Lai Province, in the central highlands. "Because of the water shortage, we don't have profits on the pepper crop this year, and the coffee crop is in serious condition, too."

In Cambodia's northwestern province of Banteay Meanchey, farmer Sim Vanna normally grows rice on about 30 hectares of land and cassava on 40 hectares. But after losing $20,000 due to a poor crop in 2015, he opted to sit this year out to "wait and see if the weather gets better." Instead, he rented rice paddies at $100 per hectare to anyone brave enough to take the risk.

DESPAIR AND SUCCESS The drought has been a boon to those in the water trade. One supplier in Thailand, who abandoned rice farming to ferry water in 2,000-liter tanks on the back of pickup trucks, is reaping windfall profits from filling large household jars in communities. "The demand is so high I can't serve them all," he said.

Such traders are not the only ones tapping into this year's drought for opportunity. There are also diplomatic points up for grabs. China, as the source of the 4,660km Mekong River, took the unusual step of publicizing a mid-March decision to release water from one of its giant dams to help the drought-hit riparian countries in the Mekong basin -- Cambodia, Laos, Thailand and Vietnam. The move followed an appeal by Vietnam.

Cambodian Prime Minister Hun Sen, China's strongest ally in the Mekong region, praised Beijing. Cambodia's fishing communities along the Mekong depend on the river and Tonle Sap, the country's largest lake, which has been running low on water.

Environmentalists have voiced concerns that the series of Chinese mega-dams along the upper Mekong, in fact, exacerbates water shortages in downstream countries. "It confirms who is actually running this river," said Piaporn Deetes, a Thai campaigner for International Rivers, an environmental group.

China's gesture, though, has helped Thailand's military rulers. The fresh surge of water is being sucked up by four temporary pumps installed along the Mekong's banks on the Thai side to feed a river in the parched province of Nong Khai. The Thais hope to divert 47 million cu. meters of water over three months to supply drought-hit communities.

This unilateral move by Thailand has left rice farmers in Vietnam high and dry. Vietnamese environmentalists are angry with Bangkok because it has not consulted the three other Mekong basin countries -- as previously agreed -- when it comes to harnessing Southeast Asia's largest body of water.

With the monsoon rains still weeks away, Thailand's action highlights the crucial role of water in times of drought to keep governments afloat. For Rawee and his fellow farmers, the question is whether such help can prevent their livelihoods from withering away.