As incomes rise, so does the prevalence of diabetes Shoppers grab a bite to eat from food vendors at a market in Jakarta.   © Getty Images

SINGAPORE   After enduring two terms in prison in military-ruled Myanmar, Bo Kyi might have been forgiven for thinking he had overcome the worst life could throw at him.

But in February, a decade and a half after he was released from jail, his doctor gave him some grim news: a diagnosis of Type 2 diabetes. Not for the first time, the outspoken activist faced some life-changing decisions, perhaps the most significant since the day nearly three decades ago when he joined thousands of other students protesting against army rule in what was then Burma.

"I changed my lifestyle since I found out," Bo Kyi said, explaining that he has cut out beer, cigarettes and sugary food. He said the grinding neglect typical of life as a political prisoner in Myanmar did not cause his diabetes. But with poor hygiene and malnutrition common in Myanmar jails, the best Bo Kyi could say was that he is "not sure" how seven years behind bars has affected his health.

The World Health Organization lists diabetes as one of the four main types of noncommunicable diseases, alongside cardiovascular diseases, such as heart attack and stroke, chronic respiratory diseases, such as asthma, and cancers. Worldwide, there were 415 million adults living with diabetes in 2015, according to the latest estimates published by the International Diabetes Federation. The IDF expects that number to hit 642 million by 2040.

Of the 2015 estimate, 83% lived in low- and middle-income countries, such as Myanmar, where gross domestic product per capita is $1,200 and around 10% of the population is estimated to suffer from diabetes.

For Khin Sokh, a 47-year-old living on the outskirts of Phnom Penh, managing his diabetes is costing him around $30 a month, as he seeks to change his diet.

"I've had to abstain from salty and sweet food. It is not easy here. In the first few months I lost a lot of weight," said Khin Sokh, who, ironically, earns a living selling desserts.

Zuniandy Subramaniam was diagnosed as diabetic three decades ago, but for the 67-year-old Malaysian, it was not such a shock.

"The doctor had been telling me beforehand that my mother was diabetic and that I would be too," he said. "I never drank, never smoked, so I did not have to make such a major lifestyle adjustment afterwards," said Subramaniam, a retired civil servant who now volunteers as general treasurer of Diabetes Malaysia.

Around 90% of diabetes sufferers have Type 2, which is caused by a poor diet, excess weight and physical inactivity. The cause of Type 1 diabetes is unknown.

Type 2 diabetes is a growing scourge across Southeast Asia, as increasingly urbanized, sedentary lifestyles, rising incomes and changing diets combine to leave tens of millions vulnerable to what was once dismissed as a "Western" affliction.

"It is accelerating," Subramaniam said of diabetes in Malaysia, where health ministry surveys showed the number of diabetics increased from 2.6 million in 2011 to 3.5 million in 2015, numbers that do not include Malaysia's estimated 6 million migrant workers.

MORE WEALTH, LESS HEALTH?   In Singapore, where the per capita GDP of just over $56,000 makes it by far the most prosperous country in Southeast Asia, the government has recently launched a "war" on diabetes, fearing that if the problem is left unchecked, the number of cases could increase from 400,000 today to around 1 million by 2050.

Dr. Bee Yong Mong, head of the SingHealth Duke-NUS Diabetes Centre and senior consultant in the Department of Endocrinology, Singapore General Hospital, said the urban culture is a "key contributor" to the city-state's diabetes problem. 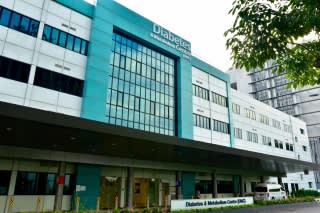 "The growing affluence of our society results in over-nutrition in a segment of our population," Bee said. "For the less well-off, the availability of good but not necessarily healthy food at affordable prices in the hawker centers and fast food restaurants is also driving up the obesity rates."

Dr. Alvin Ng, consultant endocrinologist and physician at Singapore's Mount Elizabeth Hospital and Mount Elizabeth Novena Hospital, said that not only are more Singaporeans and Asians showing signs of diabetes, but that the condition is increasingly emerging among the country's youth.

"I am seeing a greater number of younger patients, even teenagers, with Type 2 diabetes. I am also seeing more people being diagnosed at an earlier stage of their disease, sometimes as pre-diabetics."

In Thailand, the region's second-biggest economy, where incomes average just under $6,000 per year, based on 2014 World Bank figures, there has also been a rise in diabetes and related conditions, such as heart disease, hypertension and obesity.

In response, Pimpawan "Apple" Saengnark set up HealthBox, which delivers meals customized by nutritionists for clients, some of whom suffer from diabetes, obesity and other so-called lifestyle diseases.

"I'd like to see Thai people be healthier," she said. "Therefore, I saw HealthBox as a business opportunity, and at the same time we get to promote healthy eating and lifestyle to Thai people."

Part of Pimpawan's motivation for setting up HealthBox was what she describes as "a minor health complication" that required a diet overhaul, something difficult to manage where she works, in Silom, Bangkok's banking and finance hub.

"It is very difficult to source healthy meal options in Bangkok. The meals are full of MSG, bad oil and too much seasonings," Pimpawan said.

Some local staples are also being blamed for the rise in lifestyle diseases, including white rice, a major agricultural product and a key export for Cambodia, Myanmar, Thailand and Vietnam.

"There are studies which have shown an association between rice intake and diabetes," Ng said. "However, rice intake has been a traditional staple in Asia for a very long time, so it would probably be too simplistic to attribute the recent rise in numbers in Asia to rice intake alone."

Wendy Riddell, a nutritionist at UFIT, a Singapore gym, said that it is best to cut back on "white" carbohydrates, such as white rice.

"Generally these are very low in nutrients and high in energy, so in short give us empty calories," she said. "These can easily be replaced with a darker variety, which has more fiber in it and is therefore better for us."

But before someone with diabetes can address the condition, he or she needs to be diagnosed. The IDF estimates that almost half the world's Type 2 diabetics are unaware they have it.

RAISING AWARENESS   Singapore's health ministry said that every day four Singaporeans lose a limb or other appendage because of diabetes-related complications, a number likely made worse by the fact that many diabetics had not been diagnosed or found out too late, which can make it difficult to prevent complications.

"I am studying more about diabetes in order to prevent diabetic-related diseases, such as heart, liver and kidney [conditions]," said Bo Kyi, whose mother died in 2003 due to complications from diabetes. Bo Kyi was out of jail then, but in exile in Thailand. Blacklisted by the Myanmar government for his work lobbying for the release of Myanmar's political prisoners, he could not go home to see his dying mother.

"Burmese people are reluctant to do a medical check-up regularly, and the lack of medical knowledge is a root cause," he said.

There are limits to what policymakers and medics can do about a condition that stems from a wider change in how people live. Professor Tint Swe Latt, president of the Myanmar Diabetes Association and a prolific author on the condition, said some of the causes and effects of diabetes are beyond the reach of health or medical professionals.

"It is social, cultural, down to the change of people's lifestyles and to how people look after themselves," he said.

Based on reporting in Bangkok, Kuala Lumpur, Singapore and Yangon.