New and unexpected health threats have emerged in Asia that could weigh on the world's fastest growing and most dynamic region. Diseases associated with obesity and smoking are rising, and will cause tens of millions of deaths from heart and lung disease and cancer in coming decades. But alongside these lifestyle-associated conditions, the old foe of infectious disease is reemerging and threatens to cause an even greater health and economic disaster.

There remains, of course, the very dangerous problem of epidemics -- or worse, pandemics -- of "emerging infectious diseases," such as the Ebola and Zika viruses. These are already high on the list of major risks noted by the World Health Organization and most governments.

Asia has been the source of many of such outbreaks -- including severe acute respiratory syndrome and avian influenza. Given Asia's mix of vibrant trade, dense and mobile populations, eclectic culinary tastes and the world's highest concentrations of farmed animals, it is probable, rather than possible, that similar unpredictable disease outbreaks will arise there in the future.

International organizations and national governments are aware of this and have learned from previous epidemics. Most have in place contingency planning for coping with the next outbreak, to prevent a repeat of the 1918-19 influenza pandemic that killed at least 50 million people worldwide.

That horrific death toll should remind us to remain vigilant to the threat of emerging new infections and fight against complacency. The WHO was criticized for overreacting to the emergence of "swine flu" in 2009, which surprised everyone by first appearing in Mexico rather than in Asia. We should be more tolerant of such false alarms. Criticism of the swine flu response may have contributed to the slow reaction of the WHO and the international community to the recent Ebola outbreak in west Africa.

The potential for emerging infectious disease outbreaks to cause dramatic death tolls quite rightly grabs headlines, attention and resources. But an arguably greater infectious disease threat faces us right now -- that of drug resistance. In Asia and elsewhere, we are faced with infections that we simply cannot treat, as they are resistant to all known antimicrobial drugs. The human and economic consequences of drug-resistant infections are enormous.

Without concerted and effective action, global deaths from drug-resistant tuberculosis, HIV, malaria and certain bacterial infections are predicted to reach 10 million a year by 2050 -- more than the deaths from all forms of cancer worldwide -- and to cumulatively wipe off $100 trillion from global gross domestic product, according to a report authored by Jim O'Neill, an influential economist, commissioned by the U.K. government.

ASIA'S REAL PROBLEM   The crisis is global, but this inexorable rise in drug-resistant infections affects Asia disproportionately. Asia is the epicenter of multidrug-resistant malaria, and the rates of drug resistance to bacterial infections acquired both in hospitals and in communities are among the world's highest. Nearly half the annual 10 million deaths predicted by O'Neill in 2050 will occur in Asia.

Malaria, caused by a single-cell parasite rather than a bacteria, is usually treated with a combination of an artemisinin drug and a second "partner" antimalarial drug. Artemisinins, derived from the eponymous plant and the fastest acting of the antimalarials, were discovered and developed in China during the Cultural Revolution -- an astonishing feat acknowledged in 2015 with the award of a Nobel Prize. In the last decade, artemisinin-resistant parasites have evolved in western Cambodia, and artemisinin-resistant malaria is now present throughout much of the greater Mekong subregion.

Without the protection of the artemisinins, the partner drugs are now also failing, making malaria very difficult to treat in many places. Artemisinin-resistant parasites are now found in much of Myanmar. If they spread to the Indian subcontinent and Africa, where malaria is deeply entrenched, it is possible that millions of children will die. This has happened before, without fanfare, when resistance to chloroquine and then sulfadoxine-pyrimethamine, known by its commercial name as Fansidar, spread from Southeast Asia to Africa. No effort should be spared to stop this from happening again. The only way to achieve this is to eliminate malaria completely from the region, something that is within our grasp with sufficient funding and political will.

Bacterial resistance to both of the "last resort" antibiotics -- the carbapenems and colistin -- for the treatment of some common and highly drug-resistant hospital "superbugs" was first reported in Asia. These superbugs include multidrug-resistant Enterobacteriaceae such as E. coli, Klebsiella and Acinetobacter that can result in life-threatening pneumonias and bloodstream infections. Until recently, the third-generation cephalosporins could be relied upon to treat many severe infections, but now in many parts of Asia bacteria that are resistant to these ubiquitous antibiotics are widespread, not just in hospitals but in the community as well. The impact of drug-resistant bacteria is considerable, with a WHO report estimating that 38,000 deaths a year are attributable to antimicrobial resistant infections in Thailand alone.

The microorganisms targeted by antimicrobials develop resistance either through mutation of their own DNA or by borrowing from other microorganisms chunks of the DNA encoding cellular machinery for resisting antimicrobial attack. Most antibiotics, like penicillin, are derived from naturally occurring compounds produced by microorganisms. These antibiotics and many of the mechanisms that resist them have evolved as part of a war that has been waged for several billion years between microorganisms and continues to rage in the microscopic world around us.

In the early years of the antibiotic revolution, we kept up with the ability of the microorganisms to develop resistance by discovering and developing new antimicrobials. Terrifyingly for the future of medical treatment, this is no longer the case. Discovery has not kept pace with evolution, and we are now faced with infections that we have no means of treating.

The obvious solution is to develop new antimicrobial drugs. Here, unfortunately, the classic model where drug companies recoup the development costs of new drugs through sales has failed. Antimicrobials are used for short periods during acute infections, and while this may save lives it is not cost-effective from a commercial viewpoint -- drugs taken long term for chronic conditions such as hypertension or diabetes are much more profitable.

SUBSIDY SUSTENANCE   One way to tackle this currently being actively pursued is to pay drug companies to develop new antimicrobials. This will be expensive, as it costs at least a billion dollars to develop a new drug to the point where it can be made available to patients. Only governments and the largest biomedical charitable foundations, such as the Bill and Melinda Gates Foundation and Britain's Wellcome Trust, are in a position to contribute. But new drugs are only part of the answer. Overuse of antibiotics is also promoting resistance. As Dr. Dennis Maki, an American infectious disease expert, famously said in 1998, "The development of new antibiotics without having mechanisms to ensure their appropriate use is much like supplying your alcoholic patients with a finer brandy."

In many Asian countries and elsewhere, antibiotics are widely available over the counter and are frequently used to treat minor ailments -- many caused by viruses -- that do not require or respond to antibiotic treatment. There is also major overuse of antibiotics in animal husbandry and the farming of shrimp and fish, where they are used both as growth promoters and prophylaxis against diseases that spread readily among overcrowded animals.

Colistin is an antibiotic introduced in 1959, but long disused because of its toxic effects on the kidneys. Colistin was recently brought back as an antibiotic of last resort to treat infections caused by multidrug-resistant hospital infections. Since its patent has lapsed and is thus relatively cheap, it is now being used extensively in farming. It was in farmed pigs in China that colistin-resistant bacteria were found, and the spread of colistin resistance to human infections, first reported in 2015, is probably linked to its agricultural use. Infections caused by these colistin and multidrug-resistant bacteria are now untreatable.

Antibiotic use in health care and farming is poorly regulated in many countries. There is an urgent need for governments to introduce and enforce new laws controlling use. This is a delicate balancing act, and patients who really need antibiotics must have access to them. 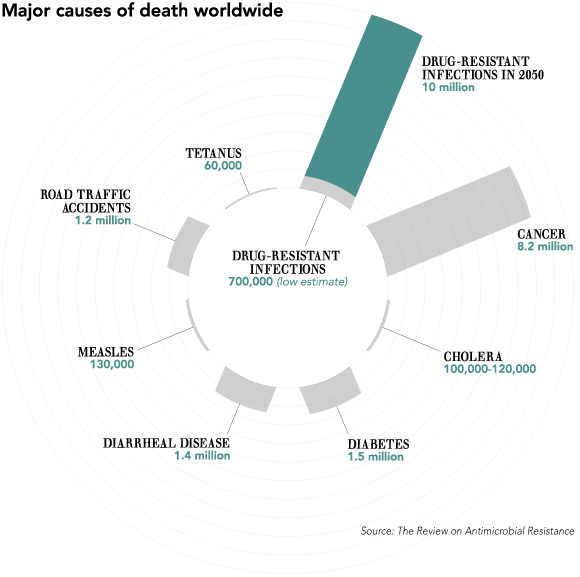 In many poor countries, health services are not developed enough to both ensure everyone's fundamental right to the best treatment and to control antibiotic use -- hence the importance of pharmacies and shops in making essential medicines widely available. But this cannot be used as an excuse by more advanced countries, where regulation is necessary. Many poor countries have underfunded and poorly functioning medical regulators. Assistance for these authorities will encourage more responsible use of antibiotics and curb the widespread problem of fake and poor-quality medicines. Substandard antimicrobials can drive resistance by inadequately treating infections.

Tackling the use of antibiotics in agriculture is also a major challenge, as powerful commercial interests are often involved. In theory, economic costs can be offset against the human and financial costs of resistance in the long term, but in practice there is rarely a mechanism for achieving this without political will and leadership at the highest level.

SANITATION EFFORTS   Many of the advances in human health made over the past two centuries have come from general public health measures, such as the provision of clean water and sewage treatment. To stem rising drug-resistant infections, universal access to clean water and sanitation remain essential.

Many infection-causing, multidrug-resistant bacteria live in our guts, and can be readily transmitted through contaminated water supplies. About 260 million people in Asia, most of them in the south of the continent, still lack access to improved drinking water sources.

More worryingly, 1.5 billion people in Asia, including 953 million in South Asia, lack adequate sanitation facilities. India's campaign to eliminate open defecation, practiced by an estimated 600 million people, or nearly half the population, will be crucial in limiting the spread of drug-resistant gut bacteria.

Much of modern medicine is underpinned by the use of antimicrobials, and their efficacy is under threat now as never before. This crisis is happening; it is not a prediction. If it is not to overwhelm Asia's prosperity and global economic, health and life expectancy gains, we must take drug resistance seriously and invest heavily in its defeat -- now.

Nick Day is a professor of tropical medicine at Oxford University and a visiting professor at Mahidol University in Bangkok. He is director of the Mahidol Oxford Tropical Medicine Research Unit, a collaboration between the two universities with support from the Wellcome Trust.