A trilateral connectivity pact signed on May 23 by India, Iran and Afghanistan will open a new trade route to Central Asia -- and potentially to Russia via the Caspian Sea. The deal will deliver a foreign policy victory to New Delhi, but only if major practical and financial problems can be overcome.

The trilateral agreement on road and rail links and the development of Chabahar port in Iran will bypass hostile Pakistan, giving a serious boost to New Delhi's trade and investment engagement with Iran, Afghanistan and Central Asia.

Moreover, if Chabahar is connected with the planned International North-South Transport Corridor, which will link Iran and Russia along a Caspian Sea route yet to be finalized, it will provide a shorter and cheaper trade route for shipping merchandise to Russia, and potentially on to western Europe.

The commercial and strategic significance of the deal makes it a victory for Indian Prime Minister Narendra Modi's foreign and trade policy. However, the project faces numerous implementation challenges, given the peculiarities of the region and the circumstances of the parties involved. 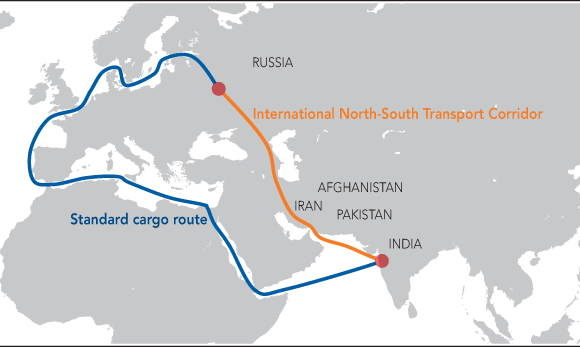 As part of the deal, India is to invest $500 million to build two terminals and five cargo berths at Chabahar, which lies just 940km from the port of Mundra in the Indian state of Gujarat. India also plans to invest an additional $16 billion in a Chabahar free trade zone to build fertilizer and petrochemical plants.

The idea of developing Chabahar port is not new. It was conceived in 2003 by the Indian government, then led by Prime Minister Atal Bihari Vajpayee, but was blocked by U.S. sanctions aimed at Iran's nuclear program. With sanctions now lifted, the U.S. is believed to support the deal because of its potential to contain China's growing influence in the region.

The transit facility is important because it would allow India to trade with Afghanistan and Central Asia through Iran, bypassing Pakistan, which does not allow easy transit for goods from India. Limited trade is allowed through the Pakistani port of Karachi, but in practice, Indian shipments destined for Central Asia typically go to Dubai and then on to Bandar Abbas, Iran. This long route adds to transaction costs and has impeded the growth of two-way trade.

As part of the new trilateral deal, India will develop a rail link from Chabahar to the Iranian city of Zahedan, which will connect with Zaranj in Afghanistan. India has already built a highway from Zaranj to Delaram, in western Afghanistan, to connect with cities including Kabul, Herat and Kandahar. From there, access to Central Asia is relatively easy.

DIPLOMATIC VICTORY This is New Delhi's second diplomatic victory on regional connectivity, following a motor vehicle agreement with Bangladesh, Bhutan and Nepal. That deal will help to improve India's trade ties with South Asian neighbors in spite of obstacles created by Pakistan, a fellow member of the eight-country South Asian Association for Regional Cooperation.

Having failed to overcome Pakistani dillydallying on proposals for the seamless movement of cargo trucks within SAARC, India persuaded Bangladesh, Bhutan and Nepal to sign a four-nation agreement that allows trucks to cross borders without the need for cumbersome and costly offloading and reloading of cargoes.

The trilateral deal looks particularly attractive for Tehran and New Delhi. Iran, looking to regain its pre-sanctions share of the global energy market, is seeking a big buyer of oil and gas, and India fits the bill. For India, which imports more than 75% of its crude oil and 35% of its natural gas requirements, Iran has the potential to become a reliable source of energy imports.

Iran is also a largely untapped market for Indian exports. Exports to Iran totaled $4.1 billion in the fiscal year ended March 2015, with agricultural and processed food items such as basmati rice, soy meal, sugar, meat and meat products accounting for 40%. India would also like to export iron and steel, electrical machinery and appliances.

Developing Chabahar is also in Iran's wider interests. Bandar Abbas, the country's main port, accounts for more than 85% of its trade but cannot handle large oceangoing ships. To overcome this problem, Iran has used Dubai as a transshipment hub, adding to transaction costs for exporters and importers.

Chabahar is a deep-sea port and could be developed as a regional trade and transshipment hub to compete with Dubai. The project also makes strategic sense for Iran because Chabahar is outside the Strait of Hormuz, the narrow sea passage between the Gulf of Oman and the Persian Gulf, and provides direct access to the Indian Ocean. Even if the Strait of Hormuz were to be closed, Chabahar could continue to function, reducing Iran's vulnerability to international pressure.

The port plan also makes sense for Afghanistan, which looks forward to reducing its dependence on neighboring Pakistan, with which it shares a volatile relationship.

SHORTER AND CHEAPER Once Chabahar is linked to the multimodal International North-South Transport Corridor, it will provide a shorter and cheaper trade route from India to Russia. A study conducted by the Indian Federation of Freight Forwarders' Associations found that cargo transportation through INSTC would be 30% cheaper than the current sea route from Mumbai via the Suez Canal, the Mediterranean, the Atlantic, the English Channel and the Baltic Sea to St. Petersburg.

Despite the complementarities between energy-poor India and the oil and gas riches of Russia and its neighboring Central Asian republics, India's bilateral trade with the region was worth only $10 billion in 2014-15. This compares with bilateral trade of $23 billion between India and its poorer South Asian neighbors, including Pakistan. The scope for expanding two-way trade with Russia and landlocked Central Asian countries is immense.

INSTC also has the long-term potential to become a key trade route between India and Europe, which would enhance Russia's strategic influence. Politically, it makes sense for Russia because it involves just two friendly countries: Iran and perhaps Azerbaijan, depending on the final route chosen.

The Chabahar connectivity deal makes geopolitical sense for India, too. China is developing a rival port at Gwadar, Pakistan, to secure access to the Middle East through an overland route that connects to its western borders. Involvement in Chabahar would allow India to keep a watchful eye on Chinese activity at Gwadar, which is just 72km away.

However, implementing these trilateral pact projects on the ground will involve a series of challenges, including unresolved issues related to gas pricing, tariff levels and the cost of road and rail links. Chabahar's development could be derailed by further unrest in Afghanistan, which would impede Indian hopes of trade with Central Asia. In addition, Chabahar is situated in the province of Sistan-Baluchistan, a predominantly Sunni Muslim area within overwhelmingly Shiite Iran. The province is currently quiet, but the risk of political instability cannot be ruled out.

Pakistan could also pose problems. Gwadar and Chabahar would likely compete for cargo traffic. Given India's poor relations with Pakistan, it is not impossible that Islamabad might try to impede Chabahar's success, possibly with support from China. It is also possible that India's increasing friendliness with Iran and Russia could complicate its relationships with close allies such as Saudi Arabia and Israel.

Chabahar offers major opportunities for New Delhi, potentially cementing in place a trade framework that will serve it well for the long term. It remains to be seen, however, whether India can overcome the extensive challenges it faces, including the delicate balancing act needed to keep its friends on board.

Ritesh Kumar Singh is a corporate economic adviser and former assistant director of the Finance Commission of India. Prerna Sharma is vice president and head of agriculture, food and retail at Biznomics Consulting.