BEIJING With the launch of the Tiangong-2 space laboratory on Sept. 15, China has moved closer to its goal of building and operating its own space station.

In October, China plans to launch a manned spacecraft to the lab. Astronauts will be able to conduct experiments and China's space program will gain experience with docking and extended stays in space. With construction of a space station scheduled for completion in about 2022, Beijing is laying the groundwork to join the small club of space powerhouse nations that now includes only the U.S. and Russia.

The Tiangong-2 lab is now orbiting Earth at an altitude of nearly 400km. It was carried into space by a Long March 2F rocket, launched from the Jiuquan Satellite Launch Center in Inner Mongolia. The Tiangong-2 is designed to last for two years as a base for experimentation in space. It is 10.4 meters long and 3.35 meters in diameter and weighs 8.6 tons. 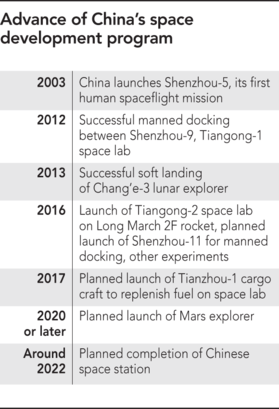 Sometime in or after mid-October, the manned Shenzhou-11 spacecraft will be launched and dock with the space lab, and its two astronauts will spend about a month conducting 14 kinds of experiments, including studies in the material and life sciences.

The inaugural flight of a new automated cargo craft, dubbed the Tianzhou-1, will take place by about April 2017 to replenish the space lab's fuel. The testing of this and other procedures will verify technologies that China needs for building and operating a space station that can accommodate prolonged stays by astronauts.

China launched its first-generation space lab, the Tiangong-1, in 2011 and conducted two successful manned docking missions. But the Tiangong-2 is designed for more advanced kinds of experiments and "is a space lab in the true sense of the word," explained Wu Ping, deputy director of China's manned space engineering office.

SPACE POWER The administration of President Xi Jinping is actively pursuing space development and seeks to make China a spacefaring nation on par with the U.S. and Russia by 2030. The Shenzhou-11 will mark the sixth manned flight of that spacecraft, and in December 2013, China landed a robotic explorer on the moon for a geological survey. The only other nations to have successfully launched humans into space and landed probes on the moon are the U.S. and Russia.

China plans to begin construction of its space station in around 2018 and to complete the project by about 2022. The nation has also announced plans for a lunar explorer that will return soil samples from the moon, and for a Mars explorer.

In the eyes of the U.S. and Japan, these ambitious plans are a worrisome security threat. With the International Space Station mission set to end in 2024, China will have space to itself as the only operator of a space station. Also worrisome is the fact that the guidance technologies developed for rockets and spacecraft can also be used for ballistic missiles.

According to the Xinhua News Agency, China's official press agency, Deputy Director Wu invited representatives of Russia, Germany, France, Italy and the European Space Agency to watch the launch of the Tiangong-2.

This was meant to show China's positive stance toward international collaboration, but no mention was made of cooperation with the U.S. or Japan.