HAMBURG, Germany German officials are stepping up their efforts to curb the surge in Chinese acquisitions of leading German industrial companies.

On Nov. 1. Sigmar Gabriel, economy minister and vice chancellor, discussed trade and investment concerns in Beijing with Premier Li Keqiang and other officials. Gabriel told reporters afterward that Aixtron wasn't discussed in what he described as frank talks.

Ahead of the trip, he had set out his views in a German newspaper op-ed. "Germany is one of the world's most open economies," he wrote. "That's why it is troubling us that China has been making direct investments by European companies ever more difficult and allows them only under discriminatory requirements. At the same time, China itself goes shopping with a long list of interesting companies with the obvious aim of obtaining strategic key technologies." 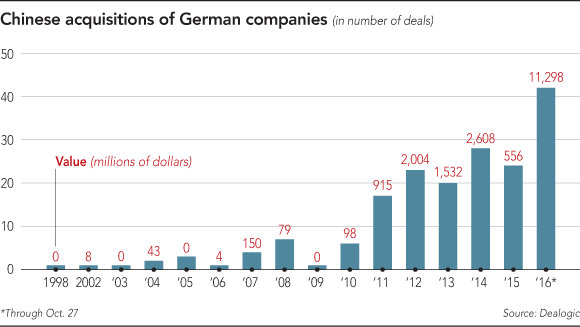 CRYING FOUL As of Oct. 27, Chinese investors this year had announced 42 takeovers of German companies, totaling $11.3 billion in deal value, more than the cumulative total for all previous years, according to financial analytics provider Dealogic, whose data dates back to 1995, well before Chinese companies began making significant foreign acquisitions.

Deals announced since February include the five largest Chinese proposed takeovers of German companies on record, excluding a 2014 restructuring involving units of South Korea's Hanwha Group. Chinese investors' German deals this year, in both number and volume, also top those of all other European markets except Switzerland, whose total is skewed by China National Chemical's $43 billion bid for seed supplier Syngenta.

In Germany, Chinese companies' acquisitions have been focused on well-established, midsize players in key technology sectors. Until now, the most high-profile has been appliance maker Midea Group's 4.5 billion euro takeover of robotics-maker Kuka.

But more large acquisitions are on the horizon. San'an Optoelectronics, a lighting products maker, said on Oct. 10 that it is in talks for a potential takeover of the rest of Osram, which has a market capitalization of 5.35 billion euros and holds 18,000 patents. Go Scale Capital, a Chinese private equity fund, is also reportedly considering a bid for Osram. Separately, the parent company of railway wheel-maker Bochumer Verein Verkehrstechnik indicated in early October that it is talking with CRRC about a sale.

The flurry of deal-making has spurred worries in German policy circles about the outlook for technological leadership, economic development and jobs. In a spate of successful state legislative campaigns in recent months, members of the far-right Alternative for Germany have claimed the deals are eroding Germany's competitiveness and destroying jobs.

"The German government should leverage China's hunger for key German technology to smoothe German companies' access to China," said Daniel Bauer, chairman of shareholder association Schutzgemeinschaft der Kapitalanleger. He noted that some German executives worry that a policy tightening will impact their sales in China. "[But] Berlin should consider the public good, not only a few major players' fear of possible retaliatory moves by Beijing," he said.

Bauer's complaints echo those of the European Union Chamber of Commerce in China, which in a report on Sept. 26 noted that Chinese companies were buying out companies in sectors in which China restricts investment by foreign companies, including cars, robotics and critical infrastructure.

Gabriel initially sought to get German or other European companies to work together on a counter-offer for Kuka but instead was only able to win pledges by Midea to preserve Kuka's local jobs and stock market listing. He then began a public push for tighter EU rules on foreign takeovers.

LAST RESORT? In mid-October, Gabriel's ministry circulated a formal proposal to other officials to strengthen EU powers to review foreign takeovers led by companies from outside the bloc involving key technologies important for industrial progress, as well as deals believed to be funded by or carried out on the direction of a foreign state. Special scrutiny would also be given to acquisitions by investors from countries that restrict foreign investment, though China is apparently never mentioned by name.

The Aixtron reversal is the biggest sign Berlin is taking a tougher stance. It followed a briefing given to German officials by their U.S. counterparts regarding security concerns. Aixtron has contracts with a number of sensitive U.S. agencies, including Sandia National Laboratories, which develops components for nuclear weapons. Chinese officials have been taken aback by Berlin's hardening. At a meeting on Nov. 1 during Gabriel's visit, Vice Commerce Minister Gao Yan decried "a climate in Germany that is hostile to investment." An editorial the day before in the state-owned Global Times newspaper said, "It's difficult to understand Gabriel's complaints about China," saying that Chinese acquirers have preserved jobs and brands while investing far less in Germany than German companies have in China.

A German economy ministry spokeswoman said the new Aixtron review would take two to three months from when the required documents are presented. Completion of the deal would also be contingent on approval by the Committee on Foreign Investment in the U.S., according to official filings.

Under Germany's foreign trade law, foreign direct investment is largely unrestricted. An amendment adopted in 2009 gives the government the right to veto the acquisition of more than 25% of any company by non-EU investors if the sale could endanger strategic infrastructure or public order.

While some have suggested the economy ministry could reinterpret the law to extend its power to review takeovers to protect technologies and jobs, Alexander Kutsch, a legal partner with the German firm Roedl & Partner, which has advised some of the Chinese bidding groups, believes such a move would be overturned in the courts.

Gabriel himself has indicated he believes that even Germany's room to amend the law itself is limited given existing EU legal regulations, though France has taken a broader interpretation of its right to oversee foreign buyouts.

With many European economies still in the doldrums and coveting the Chinese investment that some Germans are now concerned about, there is little sign that Berlin can put together a consensus in the bloc for policy change.

Volker Treier, deputy chief executive of the Association of German Chambers of Commerce and Industry, does not think his government should push, either. "Germany has always been short of FDI, and German FDI in China boosts the value added for German suppliers," he said.