BANGKOK Although bank regulators in Southeast Asia are making only slow progress in opening up the region's financial industry, banks are managing to spread their wings through mergers and acquisitions, and using digital technology.

These moves are driven by lenders' ambition to grow and thrive in a more competitive single market: the ASEAN Economic Community. According to the latest figures on the market cap of banks compiled by QUICK-FactSet, lenders that actively reach out to meet the growing needs for financial services in the region rank higher. 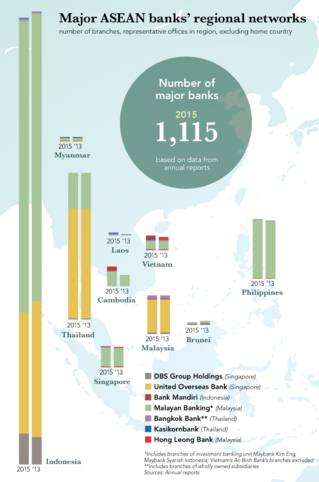 DBS Group Holdings, Singapore's state-linked bank, took the top spot on the list. It announced on Oct. 31 plans to buy the wealth-management and retail businesses of Australia's ANZ in five Asian markets for 110 million Singapore dollars ($77.8 million) over book value, in an effort to strengthen its foothold in these markets.

In Indonesia, for example, DBS's customer base will jump from 85,000 to close to 500,000. Right now, its business in the country centers on credit cards and branchless electronic banking. Indonesian authorities thwarted the Singaporean bank's earlier expansion drive, blocking its bid to acquire a local bank in 2013.

For years, the Association of Southeast Asian Nations has been working to create a single market encompassing its 10 members. With the official launch of the AEC last year, there has been some success in facilitating regional trade and investment through the scrapping of tariffs and other deregulatory steps.

That looks like a special case. According to financial data analyst Dealogic, Western banks remain dominant in arranging Southeast Asia's M&A deals, with only Malaysia's Malayan banking(Maybank) making it into the region's top five advisers, year to date.

Liberalization of the financial sector has been slow, too. Piyush Gupta, chief executive at DBS, calls banking the "most protected industry" in the region.

QUALIFIED WELCOME Under the ASEAN Banking Integration Framework, the pillar of the region's financial integration efforts, any two countries can make bilateral deals allowing qualified banks to operate in each other's markets on the same terms as local banks.

Malaysia has been a leader in taking up the "Qualified ASEAN Bank" initiative, inking agreements with Indonesia, Thailand and the Philippines. But since Malaysian banks are already active in these markets, some regulators are reluctant to push ahead with implementation, worrying that the deal could be unfavorable to their own banks.

Indonesia's Financial Services Authority, the OJK, has said it will not allow any more Malaysian banks to enter the market until there are equal numbers of Indonesian banks operating in Malaysia. Malaysian banks have been steadily expanding in the region, focusing on densely populated but underbanked markets like the Philippines and Indonesia.

During the Asian financial crisis, when many Asian banks sold off foreign assets, Maybank acquired a 60% stake in PNB Republic Bank and renamed it Maybank Philippines. It currently operates some 80 branches. In 2008, Maybank bought PT Bank of Internasional Indonesia for 8.6 billion ringgit ($2 billion at current exchange rates), and in 2011, Kim Eng Holdings, a Singapore-listed brokerage with a regional platform for 4.2 billion ringgit.

Two years after the Indonesian acquisition, Maybank turned the local unit into a full-fledged Islamic bank, seeking to attract customers in the Muslim-majority country and capitalizing on Malaysia's experience in operating banks based on a profit-sharing model rather than making money from interest payments. The unit was rebranded as Bank Maybank Indonesia last year.

With or without bilateral agreements, Malaysian banks are expected to continue expanding regionally, given sluggish growth at home.

At least one other Malaysian lender, RHB Bank, has not given up on entering Indonesia. The country "remains an attractive market as part of our aspiration to derive 20% of our profit from overseas in the next four years," an executive of the bank reportedly said in August. The company had proposed buying a majority stake in Bank Mestika Dharma in 2009, but the introduction of a 40% cap on foreign ownership in 2012 cut the plan short.

Also in 2012, CIMB attempted to take over Bank of Commerce, a midsize lender in the Philippines owned by San Miguel. Talks fell through in 2013.

In the first half of 2016, earnings from regional units accounted for about 20% and 25% of pretax profit at Maybank and CIMB, respectively. That is down from nearly 40% a few years ago, due to a weaker ringgit and an economic slowdown in the region.

DIFFERENT STROKES Thai lenders are focusing on less developed economies such as Cambodia, Laos, Vietnam and Myanmar that are closer to home. A slow recovery in Thailand's domestic economy has dampened loan growth, forcing banks to look elsewhere for business.

Kasikornbank, the country's fourth-largest lender by assets, has been rapidly reopening branches it was forced to abandon during the Asian financial crisis. It restarted a branch in Laos in 2014 and is scheduled to re-enter Cambodia by the end of the year.

Neighboring Myanmar is also attracting interest. The country, which recently opened up after more than 50 years of isolation, has issued 13 licenses to foreign banks over the past two years.

Bangkok Bank, Thailand's largest bank by assets, was one of the first nine foreign banks to obtain a license in Myanmar. President Chartsiri Sophonpanich foresees a first-mover advantage in underdeveloped economies. Bangkok Bank has had a representative office in the country since 1994, and built up its local network even during the period of military rule. "We have always had confidence in the country and we believe in the potential of Myanmar," Chartsiri Sophonpanich told the Nikkei Asian Review in a recent interview.

Having been upgraded the office to a branch in June 2015, it is now working with both Thai clients and other foreign nationals interested in investing in Myanmar.

Meanwhile, banks in underdeveloped markets are working to build their customer bases before liberalization lets in larger rivals from abroad. Their strategies focus on digital technology.

In Indonesia, where 60% of the adult population lacks a bank account, Bank Rakyat Indonesia in June launched its own satellite. The bank hopes to use the satellite to support its operations across the far-flung archipelago.

BRI and other Indonesian banks are also paying more attention to financial technology. Top lender Bank Mandiri is pushing its smartphone-based electronic money, Mandiri e-Cash, which can store up to 5 million rupiah ($375) and functions like a bank account. Although many Indonesians do not have accounts, there is more than one mobile phone subscription per person.

Bank Central Asia, one of the largest banks in the region by market capitalization, is also concentrating on its home market in Indonesia. BCA President Jahja Setiaatmadja said the key to its success is "a focus on a growing market ... which is our country."

"The toughest competition is in Indonesia. If we're not well prepared in our home country, outsiders can come in and control the business," Setiaatmadja told a local newspaper in October.

Banks in the Philippines, where around 70% of the population is unbanked and the economy is growing at nearly 7% annually, have similar views. Local lenders such as BDO Unibank and Ayala-led Bank of the Philippine Islands are building their domestic operations to pre-empt regional rivals tempted to move in.

In 2014, the Philippine government changed its rules to allow 100% foreign ownership of local banks. After the liberalization, larger foreign banks began buying stakes in midsize Philippine lenders. The most notable were Taiwan's Cathay Financial Holdings' 22.7% investment in Rizal Commercial Banking and Bank of Tokyo-Mitsubishi UFJ's purchase of a 20% stake in Security Bank.

"We have long been a leading financial institution in Myanmar and are prepared to represent the country alongside our international industry peers," said U Than Cho, senior managing director of KBZ Bank.

The move not only allows it to grab a slice of the growing investment pie in Myanmar, but it is also expected to bring its business standards closer to those of its global counterparts. "KBZ Bank had to undergo stringent due diligence procedures and demonstrate significant transparency as part of the [overseas] license application," the bank said in a statement. It is aspiring to set up shop in Singapore, ASEAN's financial hub, as well.