BANGKOK/TAICHUNG, Taiwan Taiwan's Giant Manufacturing, the world's largest bicycle maker, is looking to expand in Japan and Southeast Asia, hoping to secure future growth amid the slowdown in China, its CEO said.

"Beginning last year, this year, and next year, the China market will be down," said Tony Lo, CEO of Giant, in an interview with the Nikkei Asian Review in Thailand, adding that he does not expect the Chinese market to bottom out until next year.

Giant encountered headwinds in China and reported a 41.7% drop in net income of $707.6 million New Taiwan dollars ($22.18 million) for the three months ending in September, announced on Nov. 11. The company's revenue declined 11.4% to NT$15.15 billion for the same period. For the first nine months of 2016, the bicycle titan saw declines in both top- and bottom-line growth, and is likely to suffer its first year-on-year sales slide for the full year since 2009.

As China posted its slowest growth in a quarter of a century, Lo said his company is searching for new opportunities, especially in Japan, where most people ride for transportation but cycling for sports and fitness is less well-developed. The same is true for other economies, such as Thailand, Malaysia and Cambodia.

In Japan, where Lo sees the most potential, he pledged to increase Giant's brick-and-mortar stores from only about 25 currently to at least 200 in three to five years.

"We see very rapid growth in Southeast Asia although the revenue contribution is still low," said Lo. "It took us 30 years to develop the culture of cycling in Taiwan, and in China, it took us 20 years. I think it will take us around 10 years for Southeast Asia to pick up this cycling trend."

Europe, North America and China together accounted for more than 70% of the company's revenue of NT$60.4 billion for 2015. Meanwhile, Japan only contributed 5% of the bike maker's sales and Southeast Asia less than 1%.

Hidden in the agricultural town of Taichung near the Taiwanese coast and surrounded by paddy fields, Giant makes all the premium bicycles with price tags over $2,400 at its home base. As a company veteran of more than 40 years, Lo has witnessed Giant's advance from a tiny contract bike manufacturer back in the 1970s to the world's No. 1 brand in the bicycle industry, with a presence in 80 countries and over 12,000 dealers.

LOCAL TALENT The Giant way to go global successfully is all about trusting local talent. "Our philosophy is to only hire local people," Lo said. "In Japan, we look like a Japanese company and in the U.K., we would look like a U.K. company. We would have staff for sales, retailing, and research and development from that particular country. We are not trying to export products to a country but to execute our business strategy in a local way." 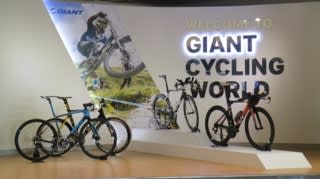 Giant's latest bikes are displayed in the lobby of the company's headquarters in Taichung, Taiwan. (Photo by Cheng Ting-Fang)

Another key policy that has helped Giant thrive as a global leader for decades is an open secret: Almost all executives promote cycling by riding themselves.

Lo said Giant is not only trying to sell bikes but to create a "cycling culture" and strives to offer customers a complete cycling experience. He practices what he preaches. In September, Lo led a group on a 583km tour in South Korea. He cycled in Bangkok for another 23km as soon as he arrived at the Southeast Asian capital in October to attend a forum hosted by Nikkei Inc.

"I am now 67 years old and I just finished my ninth time cycling around Taiwan for 900km. I take the trip as a self-health check every year," said Lo, with a gleam in his eyes. "Cycling is something that you can enjoy all your life. ... Our mission is to help people enjoy cycling and live healthily."