Ahead of regional elections, government sweetens the pot with spending promises

Voters line up at a polling station to cast their ballots in a state assembly election in India's northern state of Punjab on Feb. 4.   © Reuters
YUJI KURONUMA, Nikkei staff writerFebruary 9, 2017 12:00 JST | India
CopyCopied

NEW DELHI Indian Finance Minister Arun Jaitley gave his annual budget speech in parliament on Feb. 1, becoming the lead actor in a two-hour performance. However, the script was written and the play directed by Prime Minister Narendra Modi, whose intended audience was not the lawmakers in the chamber but the public.

"There [will] be zero tax liability for people getting income up to 3 lakhs (300,000 rupees) per annum," Jaitley said. "I appeal to all citizens of India [earning up to 500,000 rupees a year] to contribute to nation building by making a small payment of 5% tax."

The prime minister ordered Jaitley to include these plans in the draft budget for fiscal 2017, which begins in April. "This budget had Modi's approval stamps written all over it," a senior official at the prime minister's office told the Nikkei Asian Review the day after the speech.

Modi presided over preliminary meetings with Jaitley and top Finance Ministry officials in attendance. They met eight times, starting Dec. 30, to draw up the draft budget. Previously Modi merely sketched out his key economic policies, giving the finance minister a free hand to draft the budget. Only two meetings took place during the drafting of the fiscal 2016 budget. This time around Modi took charge, coming up with ideas and crafting the budget with advice from Jaitley and ministry officials.

PUBLIC RELATIONS In his speech, Jaitley gave some specifics, pledging to raise rural spending by 24% over the previous year's initial target and spending on infrastructure by 25%. There is some sleight of hand: Publicly available data show that spending on both sectors will rise 11% from the actual fiscal 2016 budget. The finance minister used preliminary figures to make the increase appear larger than it is. These gestures appear aimed at making up for the confusion and inconvenience caused by the government's sudden decision to abolish 500- and 1,000-rupee bank notes last November. The proposed income tax reductions can be seen as consolation money from the Modi government.

Pulling high-denomination bank notes from circulation was intended to squeeze people who hide their money from the tax authorities, but poor people are also feeling the pain. Most people do business in cash and there are few bank branches in rural areas. Many people living in the countryside trekked for hours to swap their old bank notes for new ones.

There are regional elections coming in five states between February and March. These include the country's largest state, Uttar Pradesh, home to 200 million people, and Punjab, the country's breadbasket. Although Modi's ruling Bharatiya Janata Party has a majority in the lower house of parliament, it is a minority in the upper house. To strengthen its hand in the upper chamber, the ruling party needs a series of victories in the regional elections. Hence the eagerness for a voter-pleasing budget.

This is a double-edged sword, however. If the government spends massively to win the elections, the financial market and business will conclude Modi's reforms have stopped. That would put downward pressure on the rupee and hamper many of the prime minister's policies aimed at achieving sustainable growth. To avoid this, the draft budget maintains one of Modi's reform priorities -- cutting the fiscal deficit.

Jaitley said the government aims to hold the deficit to 3.2% of gross domestic product in fiscal 2017 and cut it to 3% in fiscal 2018. But here, too, there is less than meets the eye. Before, the government had said it would reach the 3% goal in fiscal 2017. Nevertheless, the rupee rose against the dollar immediately after the draft budget was unveiled, as did stock prices.

GIVE THEM THE BUSINESS Jaitley's speech included industrial policies, such as consolidating government-affiliated oil companies and allowing the private sector to use some land set aside for airports through public-private partnerships. He also presented a plan to end the requirement that the Foreign Investment Promotion Board approve foreign direct investment in some sectors. Naushad Forbes, President of the Confederation of Indian Industry, called the plan "laudable." 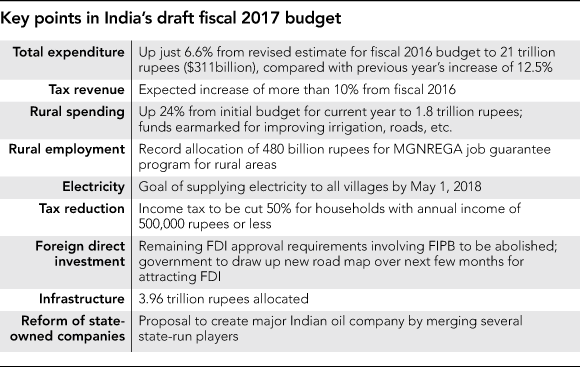 The budget comes into force once it passes the lower house. Since the BJP has a majority in the chamber, this year's budget is likely to be implemented in April without revisions. The question is how it will affect the economy.

Domestic demand depends largely on personal spending and capital expenditure. The latter has been sluggish. Gross fixed capital formation -- total capital spending by the public and private sectors -- fell year-on-year for three straight quarters through July-September 2016. This was the main reason the Central Statistics Office cut India's inflation-adjusted economic growth forecast for fiscal 2016 to 7.1%. Real GDP growth in fiscal 2015 was 7.6%. Growth in government investment in fiscal 2017 will not be much faster than in the current fiscal year. Domestic demand is thus unlikely to expand unless private-sector capital spending grows.

The outlook for personal spending is uncertain because scrapping high-value currency notes has caused consumption to fall. Sales of motorcycles in the final two months of 2016 were down 16% on the year, for example.

But the Finance Ministry is optimistic. Its economic survey released Jan. 31 said real growth may fall 0.25 to 0.5 percentage point in the second half of 2016 from the baseline forecast for a 7% expansion. The ministry also predicts real growth in fiscal 2017 will remain almost flat, at between 6.75% and 7.5%. If the tax cuts work as planned, personal spending may stay robust.

The confusion over demonetization began to subside around January. Lines in front of banks have become visibly shorter. Anjan Ghosh, chief rating officer with ICRA, said the income tax reduction is "a mild consumption stimulus," adding that it "should support consumption in the middle income group, enabling entry-level vehicle purchases."