While work is ongoing to more than double the capacity of its only liquefied natural gas terminal, located in the cental province of Rayong, from 5 million tons to 11.5 million tons by mid-year, Tevin said that further expansion plans are already in the pipeline. 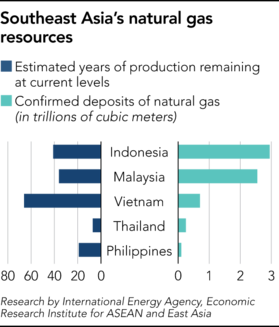 A second terminal will be built nearby that can handle 7.5 million tons a year, bringing the total receiving capacity to 19 million tons, nearly four times the current capacity.

The project has been approved by the government, and an environmental assessment is underway. "We aim to start construction in the next three years, which will take around four to five years, and bring it online in 2023 or 2024," Tevin said.

PTT recently agreed on a 15-year contract to buy 1.2 million tons of LNG annually from Malaysia's Petronas, alongside existing deals with Qatargas, Royal Dutch Shell and BP. It is looking for long-term suppliers in Australia, North America and Africa as well. The company also plans to step up spot procurement, which accounts for a third of its imports. Tevin aims to use all 19 million tons of PTT's planned capacity by 2030.

The state-run enterprise is the sole LNG importer in Thailand, Southeast Asia's largest buyer of the fuel. The country boosted LNG imports by 50% last year to 3 million tons to substitute for domestic production -- its proven natural gas reserves are on course to run out in seven years at current output levels. Tevin's 2030 target of 19 million tons is a quarter of what Japan, the world's top LNG buyer, currently imports annually.

In addition to supply contracts, PTT is eyeing production of its own outside Thailand. Subsidiary PTT Exploration and Production holds an 8.5% interest in the Rovuma Offshore Area 1 project in Mozambique. The block is among the world's richest gas fields, with annual LNG output projected at 12 million tons. Based on these numbers, PTT would be entitled to about 1 million tons a year -- a substantial contribution to Thailand's energy supply, around 5% of the 19 million tons targeted for 2030.

PTT gained its stake through the 2012 acquisition of British oil company Cove Energy, for which it beat out Shell with a bid of roughly 1.2 billion pounds ($1.5 billion at current rates). Other participants in the project include U.S.-based Anadarko and Japanese trading house Mitsui & Co. A final investment decision could come this year, and production is expected to begin as early as 2021.

"LNG is a buyer's market right now," Tevin said, referring to the decline in resource prices, "but we'll make every effort to make [the project] happen along with the other operators."

PTT is eyeing a return to aggressive investment in development and other upstream operations after having cut back in light of such factors as the slump in crude oil prices. It recently confirmed sufficient natural gas and oil resources in an Algerian block in which China's CNOOC holds an interest. Planned production capacity is 50,000 barrels of oil equivalent per day and proposals are being prepared to be submitted to the Algerian government early this year.

Studies for an oil sands project in Canada, which had earlier been deferred, are also expected to resume. As for new projects, Tevin expressed interest in exploration in Asian countries with abundant reserves, such as Vietnam, Malaysia and Myanmar.

The company is looking for growth abroad in its downstream operation too. This year it plans to spin off and privatize its retail business, including the 1,500 gas stations and Thailand's largest coffee shop chain Cafe Amazon, giving it more flexibility to branch out. Currently, there are roughly 200 PTT gas stations outside Thailand in neighboring countries such as Laos, Myanmar and Cambodia. Tevin plans to double the number in the next four to five years.

The retail company PTT Oil and Retail will be listed on the Thai stock exchange by the end of the year. PTT will keep a majority stake, but since the Finance Ministry controls only 51% of PTT, the government's share in PTTOR will be diluted to below majority.

Tevin, who took office in September 2015, describes PTTOR's privatization as "the most major change initiated during my time as CEO."

By becoming private, PTTOR will be able to compete equally with its rivals that are not subject to government decisions or special rules. It will promote transparency of its business with "clearly no privileges as a state-owned enterprise."

Back in 2010, when PTT was bidding to acquire the Thai arm of French retailer Carrefour, there was pressure from the public and the government that a state enterprise should not be competing with private companies in its noncore business. The pressure forced PTT to withdraw from the bid.

Regarding the latest Rolls Royce scandal, in which individuals of PTT and PTTEP allegedly accepted bribes from the British engineering firm, PTT is now collecting facts and data in cooperation with the government's anti-corruption committee, Tevin said.

According to the U.S. Department of Justice, Rolls Royce paid $11 million in corruption money to its intermediaries in Thailand to bribe PTT group officials between 2003 and 2013.

From now on, PTT will request its suppliers, especially big businesses, to eliminate the use of intermediaries as much as possible. If a PTT official gets in touch with a middleman, such as getting introduced to a new business, all meetings will be put on record.

He added: "We already have a no-bribery, no-gift policy. But we need to thoroughly implement this and make it our culture to accept nothing."