Safe but costly shinkansen a tough sell, but Beijing's terms a turnoff for some BANGKOK Thailand and Malaysia are set to start talks on the construction of a 1,500km high-speed railway that would connect the two countries' capitals and enhance regional connectivity. If it goes forward, the project would also set the stage for another battle between Chinese and Japanese infrastructure companies.

The Bangkok-Kuala Lumpur route makes up a large section of a mooted pan-Asia railway network, an idea former Malaysian Prime Minister Mahathir Mohamad floated at an Association of Southeast Asian Nations summit in 1995. The network would run from Singapore to the southern Chinese city of Kunming, passing through Malaysia, Thailand, Myanmar, Cambodia, Vietnam and Laos.

Much of the region's existing railways are old and not suitable for high-speed trains, though modernization work is underway to improve the mobility of people and goods in hopes of boosting the regional economy.

"ASEAN cities should be connected by high-speed rail," Arkhom said, adding that, unlike air routes, a railway connection "can promote cities along the railway line."

BRINGING IN BEIJING The concept of a regionwide rail network chimes closely with Chinese President Xi Jinping's Belt and Road initiative, which aims to create an economic corridor from Asia to Europe by developing overland and maritime routes.

Chinese involvement in regional transport networks is on the rise. A railway line between Kunming and the Laotian capital of Vientiane is now under construction. This will connect with another line that China is involved in: a high-speed link between Nong Khai, just across the border in Thailand, and Bangkok.

It is easy to imagine Beijing jumping at the chance to participate should Thailand and Malaysia seek help for the planned high-speed railway. 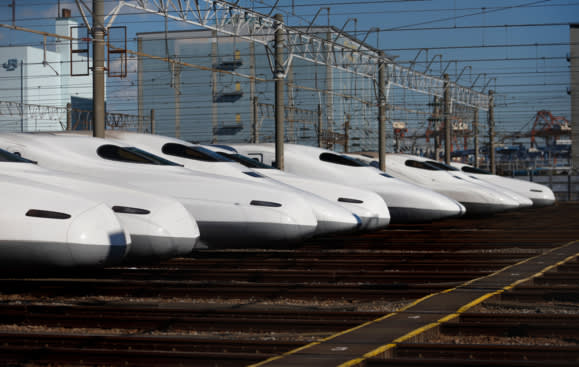 Japan's shinkansen trains have a reputation as being safe but pricey.   © Getty Images

But Japan is also eager to export its shinkansen bullet train technology. Japanese companies have already signed one high-speed rail deal in Thailand, in addition to a deal in India, and shinkansen trains have been up and running in Taiwan since 2007. In 2015, however, Japan lost out to China in the bidding for Indonesia's high-speed rail project.

Japan and China are also currently vying for contracts for the planned Singapore-Kuala Lumpur line, which will be the first cross-border high-speed railway project in Southeast Asia. The Singaporean and Malaysian governments have agreed for the 350km long railway to start operations by 2026. The proposed Kuala Lumpur-Bangkok route would extend the line all the way through the Malay Peninsula. That route is currently served by low-speed trains that run on 1-meter gauge tracks. High-speed trains would require a new set of 1.4m standard gauge tracks to be built, Arkhom said.

"But if we cannot put in much investment, we will just go on our existing 1-meter gauge," he added. As a first step, Arkhom said, Thailand will look into electrifying the diesel trains that run between the southern Thai city of Hat Yai and Kuala Lumpur this year. "We only have limited resources," he said.

"VERY EXPENSIVE" Thailand's two high-speed railway projects already in the pipeline -- one Japanese-backed and the other Chinese -- have been plagued by funding trouble.

For the shinkansen project, Arkhom said Thailand is planning to propose that the Japanese side shoulder part of the investment burden through a joint venture. Based on Japanese studies, the proposed cost for a 670km route connecting Bangkok with Chiang Mai, in northern Thailand, is estimated at around 500 billion baht ($14.2 billion), which Arkhom describes as "very expensive." The China-backed railway project, linking the Laotian border and the Thai capital, covers a longer distance of 873km but is set to cost just 379 billion baht. "[The plan from] the Japanese team is based on Japanese standards but ... [the railway] will not be in Japan, and we are not as rich as the Japanese," Arkhom said, arguing that Japan should compromise on standards other than safety, to "make it happen in this country."

Construction is planned to take place in two phases. The first, linking Bangkok and Phitsanulok and covering 380km, will start in 2019. Work on the latter half is scheduled to begin a year later. The entire route is planned for completion by 2023.

Thailand last year said it would finance the project itself, focusing just on the 250km section between Bangkok and the northeastern city of Nakhon Ratchasima, after failing to agree on loan interest rates with China.

Arkhom said the remaining route covering 620km is still on the table. "We have to keep this project alive as promised, although there may be some delays."

Negotiations for Chinese loans are also continuing. The latest agreement is that China will lend money to purchase materials imported for use on the Bangkok-Nakhon Ratchasima section. The interest rate, however, is still higher than those offered by such financial organizations as the Asian Development Bank, Arkhom said, with the latest offer at 2.3% for loans in either yuan or U.S. dollars.