Pangestu and Nellor: The world is getting RCEP all wrong

The Majestic Maersk, one of the world's largest containerships, is moored at the Yangshan Deep Water Port in the Shanghai Free Trade Zone.   © Reuters
February 23, 2017 10:00 JST | China
CopyCopied

The Regional Comprehensive Economic Partnership appears to have been hijacked by pundits developing a "U.S. vs. China" narrative to explain the state of play in global trade. However, it is simply wrong to position RCEP as a Chinese-led competitor to the Trans-Pacific Partnership advanced as part of an American pivot-to-Asia strategy.

Consider this recent comment by Joshua Kurlantzick, senior fellow for Southeast Asia at the Council on Foreign Relations. He wrote: "Only days after [Donald] Trump's election, leaders from Australia, Malaysia and other nations that promoted the TPP changed course and embraced a rival China-led agreement known as the Regional Comprehensive Economic Partnership, which Beijing has been pushing for years. RCEP, which pointedly excludes the U.S., would allow China much more influence to set regional trade rules and norms."

Every proposition in that statement is incorrect. Australia and Malaysia did not change course; they have been party to the RCEP talks since 2011, two years before the expanded 12-member TPP group began comprehensive discussions. RCEP is not China-led; it is a framework that Indonesia, as chair of the Association of Southeast Asian Nations, introduced in 2011. Lastly, RCEP does not exclude the U.S. or any other interested country; the framework explicitly says that the partnership is open to anyone willing to meet its terms.

RCEP covers ASEAN's 10 members plus six other countries with which the bloc has reached free trade agreements: Australia, New Zealand, China, India, South Korea and Japan. It was introduced with several goals in mind. One purpose was to restore ASEAN centrality to a process of parallel discussions with the "plus six" partners. The negotiations around the separate agreements varied widely and reflected different degrees of ambition. RCEP was meant to bring these disparate discussions into a single framework, based on principles that could be used to bring about best practices by raising the ambition of the weaker individual agreements.

RCEP was designed to be consistent with multilateral trade reform. The framework says that agreements should be consistent with World Trade Organization rules and best practices as well as transparent. Moreover, by explicitly providing for open accession, the framework recognized that regional agreements should be one of the pathways to securing a stronger multilateral trade and investment system. 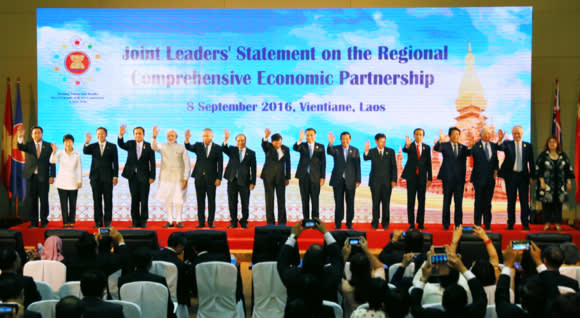 RCEP is designed to give its 16 members a framework for ongoing discussions on trade and investment issues.

RCEP was also designed to be more "fit for purpose" in a rapidly changing world than traditional trade agreements. It is not a single negotiating effort with a beginning and an end, like the TPP, but rather a framework within which current trade agendas can be agreed, different stages of development can be recognized and unanticipated future issues can be addressed.

The evolutionary approach and recognition of different levels of development have served ASEAN well. For instance, the ASEAN Economic Community may have started with low ambition, but it went through different stages in which the process deepened, widened and accelerated. Often, cooperation in the bloc experienced a boost in response to crises and the need for new sources of regional growth. As members' confidence increased, new issues were incorporated, such as e-commerce.

ROOM FOR BOTH In sum, RCEP is neither China-led nor a TPP rival. The TPP and RCEP are different models and need not be in conflict. They could coexist in a constructive way. The TPP is a single undertaking on which agreement was required on a defined agenda. RCEP is an ongoing framework for discussion of trade and investment issues providing for incremental agreements that are open to all.

With the TPP shelved and headwinds growing -- in the form of increased protectionism and nationalism -- there is a need for ASEAN and East Asia to refocus. The openness of the trading system during much of the last three decades has benefited the region's growth and development and lifted large numbers out of poverty. To support continued development for the young and productive populations of countries like Indonesia and India, further reforms and an open global trading system are in Asia's interest.

Despite the economic slowdown in China, the emerging and developing countries of Asia are still growing more rapidly than the rest of the world. Asia is not caught up in the anti-globalization sentiment afflicting Europe and the U.S. Asia remains more optimistic about the need for globalization and continued reforms to ensure that jobs are available. The challenges facing Asia are more to do with ensuring equitable and inclusive development.

TAKE THE LEAD This is the moment for Asia to rise to the occasion and ensure the openness of the world trading system. In this regard, Asia could continue unilateral reforms and use RCEP as a platform to provide leadership by example.

How can we ensure that RCEP will be credible and sufficiently ambitious?

The RCEP members are very diverse, in terms of their levels of development and economic systems. Participants will have to find creative and flexible ways to achieve more ambitious targets. The goal is to complete the negotiations by year-end: If there is a collective push to achieve this, not just Chinese impetus, then Asia will be able to provide much-needed leadership during these challenging times and address disruptions posed by digital technology.

Given the development gaps within the region, a crucial centerpiece of RCEP or any other Asian agreement is economic cooperation. This is the only way to ensure equitable development among and within members, as well as build confidence for continued reforms.

Such cooperation could include capacity building, support for infrastructure and experience sharing. Recent initiatives from China, such as the Belt and Road Initiative and the Asian Infrastructure Investment Bank, can be part of this too, but they will need to be finely targeted to be effective.

The time has come for Asia to take the lead. RCEP, with its single-P emphasis on partnership, is a key platform that can contribute tremendously to ensuring that the global trading system remains more open than closed.

Mari Pangestu is a professor of international economics at the University of Indonesia and adjunct professor at Columbia University's School of International and Public Affairs. She previously served as Indonesia's minister of trade. David Nellor is a Jakarta-based consultant who was previously a senior adviser at the International Monetary Fund.