Honda rolls out a self-balancing motorcycle 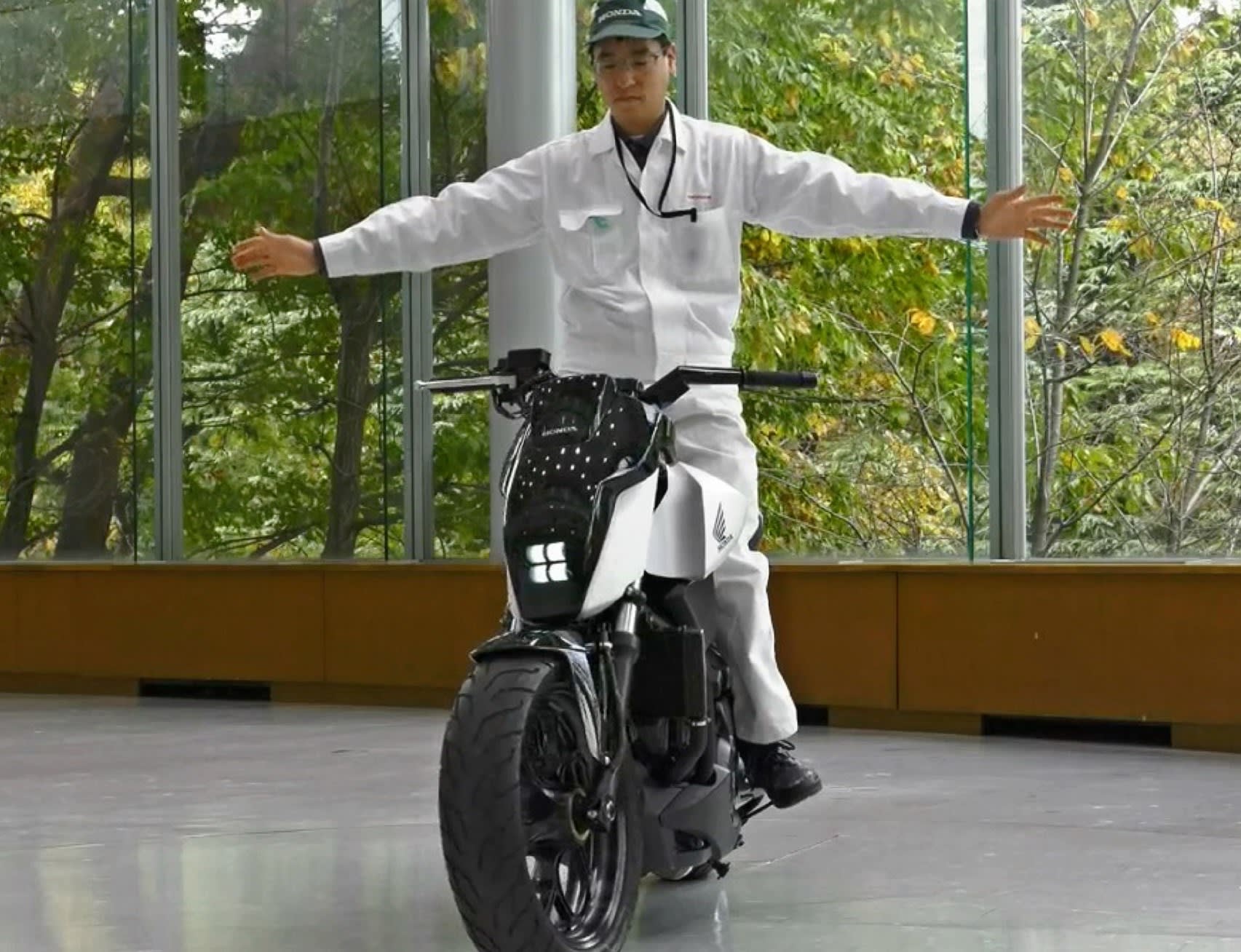 A motorcycle equipped with Honda's new system can keep itself balanced even at a stop. (Courtesy of Honda Motor)
TOMOKO WAKASUGI and TAKEMI NAKAGAWA, Nikkei staff writersMarch 2, 2017 10:00 JST | Japan
CopyCopied

TOKYO Amid the rapid advances in motorcycle technology, Honda Motor is pushing the envelope even further with a self-balancing system that could pave the way for a whole new kind of ride.

Participating in the International Consumer Electronics Show in Las Vegas in January for the first time in 10 years, Honda stole the show with its self-balancing motorcycle. The prototype, which utilizes what Honda calls the Riding Assist system, was developed using technology the automaker accumulated through its Asimo series of humanoid robots and other projects.

Riders often have difficulty balancing motorcycles when riding at low speeds or coming to a stop. In Japan, many people struggle to control heavy bikes. As a result, electric bicycles and minicars have eaten into the motorcycle market. Honda began pursuing self-balancing motorcycle technology to eliminate such difficulties and "enable more people to enjoy riding motorbikes," said Makoto Araki, an engineer at Motorcycle R&D Center, part of Honda R&D.

In addition to Asimo, engineers at the center also drew on technology developed for the Uni-Cub, a futuristic seat-type electric scooter, and other products.

Kazushi Akimoto, the center's chief engineer, who has been involved in robotics projects, and Arai began working together to develop a self-balancing bike. 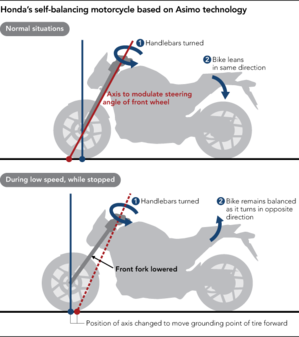 Normally, a motorcycle leans in the direction the front wheel is pointed. When the Riding Assist system is engaged, the bike leans in the opposite direction and is kept upright through imperceptible adjustments. This self-balancing mechanism is the "very principle that enables Asimo to stand on its own," Akimoto said. The robot can stand because the movements of its legs and torso are balanced.

"We concluded that it should be possible to make a motorcycle self-balancing by moving its tires to change the point at which they contact the ground and making adjustments to the steering," Akimoto explained.

The prototype is extremely simple, as it adds only three parts to an ordinary bike: a system to lower and raise the front fork, a motor to modulate the steering angle of the wheel and a device to disconnect the handlebars from steering movements.

Encouraged by the positive reception the Riding Assist system received, Honda is working to mass-produce self-balancing motorcycles as soon as possible.

TOMORROW'S RIDE Motor-assisted bicycles were first developed in the 19th century. In the more than 100 years since, motorcycle manufacturers have competed fiercely to improve the performance, design and eco-friendliness of their products while also cutting costs. But there have been no major changes to the basic construction of a motorcycle -- two wheels and an engine to rotate them.

Makers are now challenging that convention with the help of next-generation technologies.

In 2016, to commemorate its 100th anniversary, German automaker BMW showcased a self-balancing motorcycle as a concept vehicle. Although details of the design have not been made public, the bike relies on the gyro effect, which keeps a spinning top from falling over. With its futuristic design, the bike adopts a self-driving system that the company says will help prevent accidents, making helmets a thing of the past. Self-balancing motorcycles could make riding easier for elderly and other riders, but that is just one of the technology's potential applications. "It could become a fundamental technology for introducing driving-assistance systems similar to those used in four-wheel vehicles," said Atsuo Ota, senior researcher in charge of electric devices for motorcycles at Honda R&D, suggesting that the automaker plans to use Riding Assist for developments similar to self-driving cars.

Parts makers are jumping on the bandwagon. Germany's Continental plans to develop technology that allows a motorcycle to safely follow the vehicle in front of it and brake automatically. The company will utilize radar sensor technology designed for automobiles and hopes to roll out the new tech by 2020.

The future of motorcycles, however, is not limited to autonomous-driving systems.

Kawasaki Heavy Industries has begun developing an artificial intelligence-equipped bike that "converses" with its rider and adjusts engine output and braking performance to match his or her preferred driving style. The company hopes to develop practical AI technology within a few years.

"We will have to consider joining hands with people who have technologies and cultures unavailable to Honda, based on the spirit of open innovation," said Hiroyuki Nakata, chief engineer at Honda R&D.

Once self-driving cars become a reality, motorcycles, too, will likely change radically. For motorcycle makers, their future depends on being able to stay ahead of the curve and lead innovations.