Tranquil spaces can lift the spirit, but they need financial savvy to survive

TOKYO Japan's mixture of ancient and modern may be a cliche to old hands. But to the visitor, it is striking. As one walks around Tokyo, the two most common structures are convenience stores and shrines. In the shade of centuries-old Edo-era temples are 7-Eleven convenience stores, and FamilyMarts can be seen framed by torii, the ceremonial entrances of Shinto shrines.

The border between the secular and spiritual can be startlingly porous. Komyoji temple is an unassuming two-story structure only a few hundred meters from the teeming entrance of Kamiyacho subway station, in a bustling Tokyo neighborhood. But inside, it feels 300 years distant.

The main altar is on the second floor. A gold-painted, wooden statue of the Amitabha Buddha is surrounded by lacquered altar tables, candles, incense jars and copies of sutras. A balcony overlooks the temple's cemetery, where breezes bring the scent of fresh flowers laid before many of the 600 gravestones. In the background, the iconic Tokyo Tower soars into the sky. 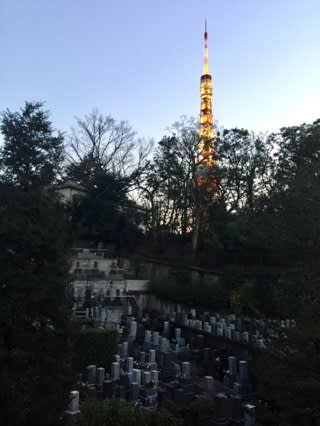 It is to this temple that a 37-year-old monk known as Shoukei belongs. There is little in his appearance -- shaved head, indigo blue tunic, baggy trousers -- that indicates anything out of the ordinary, but Shoukei is far from typical. Nominated as a Young Global Leader at the World Economic Forum in 2013, and a graduate of the Indian School of Business, this Buddhist with an MBA is leading the effort to rescue Japanese temples from their moribund present and make them relevant to Japan's stressed-out, overworked and aging population.

The Japanese tend to have an ambiguous relationship with religion. Although a clear majority identify as atheists in surveys, most are nonetheless comfortable joining religious rituals such as visiting shrines during festivals. These rituals depend less on religious belief than on the occasion. It is common for someone to be welcomed to the world as a baby with Shinto rites, married in a Christian ceremony and buried with Buddhist rituals.

LIVING BETTER Funerary rituals are therefore the Japanese Buddhist monk's stock in trade. "When people think of Buddhism they think of death, but what about life?" Shoukei said. He believes religion should be about helping people to understand their purpose and to live a better life. It was these concerns that first led him to Buddhism. A philosophy graduate of the University of Tokyo, Shoukei was ordained in the Jodo Shinshu school of Mahayana Buddhism in 2003 when he was 23 years old. The cafe at Komyoji was the first of Shoukei's ventures to help the temple maintain its financial footing.

He found that the temple community is primarily concerned with ceremonies, rather than philosophical pursuits. "Temples should be a repository of our history and culture, passing the baton of our civilization's foundations to future generations," he said. But as social conditions rapidly change, temples are failing to adapt.

Traditionally, temples in Japan have been led by one priestly family, based on the principle of primogeniture. The cremated remains of neighborhood families are entombed on its grounds. These families contribute regular donations for the temple's upkeep, which, along with fees for graveyard plots and maintenance, are what keep the temples financially afloat.

But in modern Japan, an exodus from the countryside to the cities, coupled with the increasing number of childless couples and people opting for secular funerals, have meant that tens of thousands of temples are in danger of closing down within the next decade or so. Primogeniture adds to the crisis, since it is unclear what happens to a temple when the priestly family in charge has no son to take over. 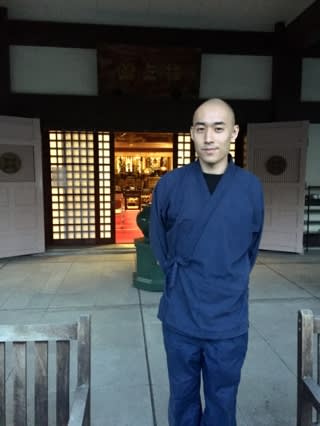 Shoukei does not come from a temple family. He grew up in Hokkaido, where his father ran a company that manufactured machine parts for robots. The head priest at Tokyo's Komyoji temple, which Shoukei eventually joined, did not have any sons, which is probably why an outsider like Shoukei was accepted into the temple.

It also might explain Shoukei's open outlook. The young man quickly realized that a temple funded entirely by revenue from graves and funerals could not survive. "With so much social fragmentation, we needed to change our focus from families to individuals. And we could not take anyone's loyalty for granted," he explained.

CAFE SOCIETY His first venture was a cafe on Komyoji's second-floor balcony. Kamiyacho is a bustling business district, and the balcony overlooks the grassy graveyard, making it a pleasant green space in what is otherwise a concrete jungle. About 30 to 40 office workers from nearby buildings have made it a habit to bring their lunch to the temple cafe during their work break. Shoukei said that opening up the space to local people, regardless of their religious inclinations, has helped restore the temple as a social center of the neighborhood. It has created a "third space" for people in the area, one that is neither office nor home.

By 2010, Shoukei had spent seven years at Komyoji. It became increasingly clear to him that he needed more business skills if he wanted to help Japan's temples prosper. He decided to apply for an MBA program at the Indian School of Business in Hyderabad. He chose India because it was the birthplace of many spiritual gurus, and he felt a deep "soul connection" to the country. "I knew I would probably have only one chance to live abroad, so I wanted it to be somewhere that mattered to me," he said.

Shoukei was both the first Japanese and the first monk to study at ISB, but he found the experience enlightening. In India, religion infused meaning into people's daily lives in a way it no longer did in Japan. And the classes in marketing, strategy and finance proved valuable.

After returning to Japan, Shoukei began to conduct temple management seminars across Japan. He usually holds six per year and over 400 priests have attended so far. The seminars use different temples as case studies, and students must present a temple renewal plan to graduate. The ideas generated include ways to raise revenue and relevance by offering meditation courses and temple stays, supporting volunteer activities, and hosting music and theater productions.

High-tech graveyards, where urns are stored in lockers and made available on conveyor belts to relatives who access them with smart tags, have also started to combat the space crunch in traditional cemeteries.

He said that materialism cannot be a lasting end in itself. "Why are people working themselves to death?" he asked, referring to karoshi, the Japanese term for "death by overwork." He flashed a tranquil smile. "It is only at the temple that people will be able to rediscover the experience of living."