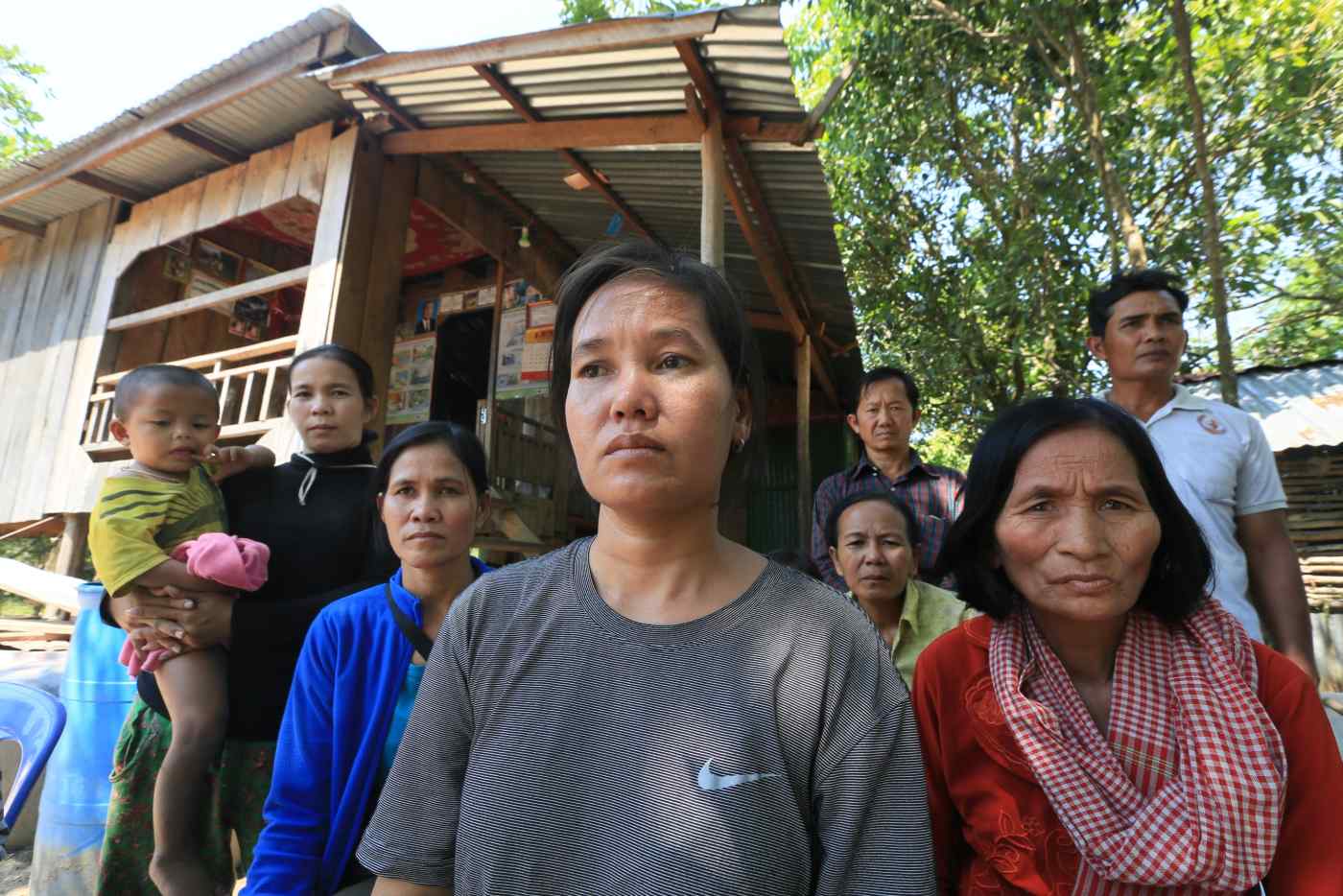 PHNOM PENH On the morning of Feb. 14, about 100 villagers had gathered on a street near the official residence of Cambodian Prime Minister Hun Sen.

They tried to march to the residence to hand the prime minister a petition asking for his help in recovering their land, but they were forcefully removed by a security force guarding the premises.

"They grabbed me like a pig," said one of the protestors, 40-year-old Nom Vannary, showing her bruised arms.

She and other villagers from Prek Chik, a village in the southwestern province of Koh Kong, have been engaged in land disputes with a local sugar plantation and processing company for nearly a decade. Two days after the failed protest, they showed the Nikkei Asian Review how parts of their farmland in the village have been enclosed by the company. Nom Vannary shows a scar on her arm, after beaten by security guards. (Photo by Ken Kobayashi)

According to Housing Rights Task Force, a nongovernment organization supporting the villagers, a district court ruled that the Cambodian government's concession to the company of an area of land including the village's fields is legal and effective.

A sub-decree signed by the prime minister in 2009 defined the conceded area as being inside a different village called Chouk. The sugar company then obtained a document from the provincial government saying the villagers' lands are part of Chouk, not Prek Chik. The court's ruling was based on the sub-decree and the provincial document -- the latter of which the villagers and the NGO say is false.

One of the villagers provided her national ID card, which clearly states her home address is in Prek Chik, but the court apparently ignored such evidence.

MISSING PIECES For the past quarter century, Cambodia has maintained continuous rapid economic growth, with its gross domestic product expanding an average of more than 7% annually over the past two decades. Per capita GDP jumped from $250 in the early 1990s to more than $1,100 in 2015. 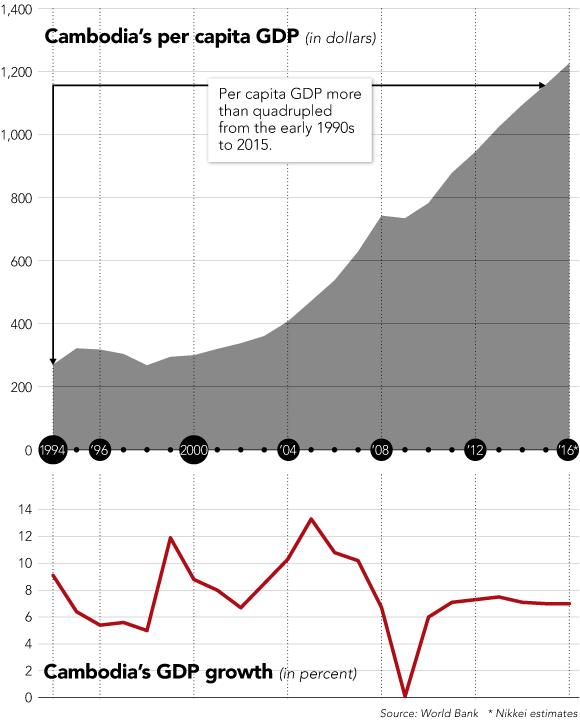 Basic living-standard indicators have improved. Life expectancy at birth, for example, is approaching 70 years, compared to 54 years in 1992 and 31 years in the late 1970s. The ratio of the population in poverty, defined as those living on less than $3.10 a day based on 2011 purchasing power parity, has dropped to around 20% from 67% in 1994.

But other indicators paint a darker picture.

According to the latest World Bank report on the Cambodian economy, the share of the population that, though not impoverished, is economically vulnerable has been increasing since the early 2000s, while very few people are moving up into the middle class. This, the report says, is "partly because of limited human capital and other assets such as land."

Less than half of middle and high school age children are enrolled in school. Access to electricity remains limited to well below 50% of the total population, by far the lowest among less-developed Southeast Asian countries and a further setback for school children.

Despite the years of economic growth, many government and social institutions are failing in their duty to protect citizens' basic rights and security, as seen in the Koh Kong court ruling. One reason for this is the lingering influence of the Khmer Rouge, which ruled the country from 1975 to 1979. During this time, the regime abolished private ownership of property and destroyed related public records, in addition to dismantling laws and other institutions.

Today, registering property, including automobiles and real estate, with the government is still not common. Most landowners, both urban and rural, lack proper titles to their lands, leaving them vulnerable to sudden claims of ownership by either the national government or powerful businesses.

At the same time, due to pervasive corruption, few Cambodians trust either law enforcement or the judiciary to safeguard their rights and assets. Judges are basically in the pocket of the ruling Cambodian People's Party, while many lawyers work for whoever can pay the most. As a result, most people avoid bringing lawsuits.

Preap Kol, an executive director with the Cambodian office of global corruption watchdog Transparency International, said corruption is "the root cause of almost all social problems in Cambodia." 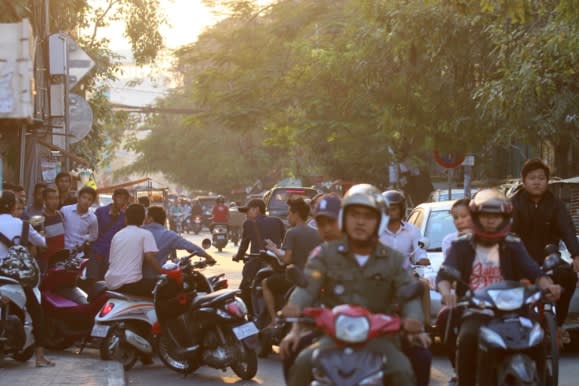 Several Phnom Penh residents have said they avoid going to public hospitals when they fall ill because they would have to pay a bribe to receive even low-quality care. "When we get sick, we just go to a pharmacy to buy medicine. That's why there are so many pharmacies on the streets," one of them said.

For private businesses, too, corruption is unavoidable.

A 45-year-old Phnom Penh businessman who ran a construction company until recently told the Nikkei Asian Review that it takes a bribe of around $1,000 -- on top of official fees -- to obtain each necessary license and permit.

In a road-building project, the construction company typically must go along with government officials' orders to inflate the overall project cost by submitting a "padded" material procurement estimate. In reality, the company buys only what it needs to complete the project, and the official and the company pocket the remaining money.

For irrigation projects, government officials have been known to embezzle as much as 40% of the inflated official cost. "Irrigation and dams are lucrative public works for officials because all the evidence sinks under water when the work is done," the businessman said.

The international community has given $19 billion in official development assistance to Cambodia since the Paris Accords of 1991. Given the widespread corruption in the country, it is almost certain that a significant portion of this has been embezzled by government officials and their cronies.

Most publicly listed corporations from developed economies would find it difficult to do business in such an environment due to strict compliance and accounting requirements in their home countries.

Transparency International's Kol said Chinese companies and businesspeople have an advantage in this area because their activities are not subject to such strict oversight back home. "That is a part of the reason why the Chinese business presence in Cambodia is outgrowing that of other foreign businesses," he said.

Cambodia ranked 156th out of the 176 countries in Transparency International's Corruption Perception Index 2016. It came 131st out of the 190 countries in the World Bank's Ease of Doing Business ranking last year, ranking just 183rd in the construction permits category.

Nevertheless, there are some signs of improvements in both government transparency and private-sector development.

The Ministry of Commerce introduced a mandatory online business registration system in December 2015, which takes the human factor out of the process. Although the system has been quite slow to catch on due to its clumsy user interface, it is expected to eventually reduce at least one form of corruption in administrative procedures.

The Ministry of Public Works and Transport, meanwhile, launched online vehicle registration and driving license exam systems this January. The new system should help reduce the number of unregistered cars on the country's roads, as many -- if not most -- used-car buyers skip registering their vehicles to avoid paying bribes to government officials.

The Ministry of Education, Youth and Sport started a strict crackdown on cheating on national exams in 2014, bringing an end to the country's epidemic of academic bribery.

LOOKING AHEAD Cambodia's economic growth has largely depended on the growth of its garment and shoe exports, supplemented by construction and tourism.

As the country moves into the lower-middle income bracket, garment factory wages will inevitably rise and international aid taper off. For further growth, the country needs to foster a variety of industries that do not depend on government spending or aid from outside.

The Young Entrepreneurs Association of Cambodia, founded in 2009, now has over 100 members, including founders and chief executives of fledgling companies. One member said that most of his peers try to keep a distance from corrupt government officials and maintain their own values. "We are different from the traditional chamber of commerce, which is mostly run by corrupt oknha [local tycoons]."

"Today we hear people complain about corruption almost every minute. Taxi drivers, noodle vendors, all sorts of people do. This is a huge change from a few years ago, when very few people said anything about it," Kol said. He thinks social media is playing a big role in spreading information and changing perceptions.

Upcoming elections -- provincial polls are set for this June and national elections are scheduled for July next year -- will be the first to take place in Cambodia's new social media-saturated environment. The question is whether politicians are prepared to face voters who now know just how much they have been missing.