China's Greek investment is making waves in the Aegean

Heavy investment in ports and other infrastructure raises EU eyebrows PIRAEUS, Greece China is pouring money into Greece's infrastructure sector, viewing the cash-strapped country as a strategic gateway to Europe.

From the Greek government's perspective, Chinese investment offers hope for keeping the economy afloat. The European Union, though, is increasingly alarmed at Beijing's growing influence.

About 10km southwest of Athens, the flags of China and Greece flutter outside the headquarters of the Piraeus Port Authority. Some 16 million passengers pass through the port, the country's largest, each year. China Cosco Shipping, China's largest shipping company, in April 2016 agreed to purchase a 67% stake in the port operator from the Greek government.

Greece is required to cut government spending and privatize state-run businesses under the terms of its EU and International Monetary Fund bailouts. It has been relying on such help to cope with its debt crisis since 2010. Austerity measures, however, have prolonged the country's economic slump, keeping it locked in a vicious cycle.

Foreign investment may be the best hope for breaking that cycle. And China has thrown Greece a lifeline as part of its Belt and Road Initiative -- Beijing's plan to build an economic zone stretching all the way to Europe and Africa by land and sea.

Cosco has been at the vanguard of the march to Europe since it acquired operating rights for the Port of Piraeus container terminal in 2008. The company hired more than 1,000 new workers and invested 600 million euros ($639 million at current rates) to introduce state-of-the-art cranes and construct a new quay, among other projects.

The big push is paying off. The port's container-handling volume surged more than fivefold in seven years, totaling 3.47 million twenty-foot equivalent units, or TEUs, in 2016. 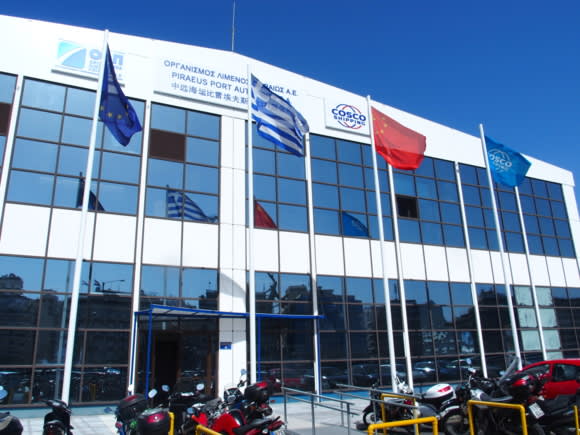 The Greek and Chinese flags fly at the headquarters of the Piraeus Port Authority.

When the terminal was still state-run, the Port of Piraeus did not even crack the global top 100 in terms of container volume. Today, it ranks among the world's 50 biggest container ports.

"WIN-WIN DEAL" At one point, European companies showed interest in taking over the facility. But by the final round of bidding, Cosco was the only player still in the game.

Under the 368.5 million euro purchase agreement reached last April, the Greek government initially sold Cosco a 51% stake. The additional 16% is to be transferred provided the Chinese company invests 300 million euros in the facility over the first five years.

"This time, it was a win-win deal for both sides," said Nektarios Demenopoulos, an official at the Piraeus Port Authority.

According to Greek media reports, the port authority's management team will soon announce new investment plans. The pillars are expected to be a new cruise ship terminal -- aimed primarily at wealthy Chinese tourists -- and a vessel repair center. One Cosco source said investment over the next five years will "exceed 600 million euros."

Greece's expectations for Chinese investment are growing ever higher, and Beijing is only too happy to oblige.

Greek Prime Minister Alexis Tsipras is likely to attend a Belt and Road summit in the Chinese capital in May. There is speculation that he might hand Chinese President Xi Jinping a wish list of priority projects.

Even Greeks who oppose the privatization of state-run businesses are starting to wave the white flag, recognizing that China has overwhelming financial resources.

"We must adapt to reality," said Giannis Lagoudakis, the mayor of Perama, the Piraeus suburb that is home to the port. He had previously called for keeping the port in the government's hands. Now, he is lobbying the port authority's new management to award expansion contracts to local companies.

George Tzogopoulos, a lecturer at the Democritus University of Thrace specializing in Chinese diplomacy, stressed the importance of Greece for China. "Greece is a cornerstone of China's strategy toward Europe," he said. "Therefore, China has strengthened its presence in Greece carefully and gradually."

That strategy is starting to raise alarm bells as China looks beyond Greece, to the rest of Europe.

Beijing has also reached into the European railway business. China Railway Group, a construction company, has embarked on a project that will result in a 350km rail line linking Serbia with Hungary -- an EU member.

These moves reflect China's desire to expand its political influence and cultivate new markets for its products. But the Financial Times reported recently that the European Commission, the EU's executive arm, has launched an investigation into whether the Serbia-Hungary railway runs afoul of an EU law requiring open bidding for large-scale transport projects.

Some in the EU warn that China, through its massive state corporations, could gain excessive influence in central and Eastern Europe.

Such concerns clash with calls in Greece for closer ties with China, including efforts to increase the number of Chinese tourists to the country from the current 50,000 a year.

Greece once stood at the brink of leaving the eurozone, after clashing with the EU over its financial crisis. Differences of opinion over China could be seen as another example of the union's fraying bonds in the wake of Britain's vote to withdraw.