Traditional instrument is enjoying a resurgence with a new generation 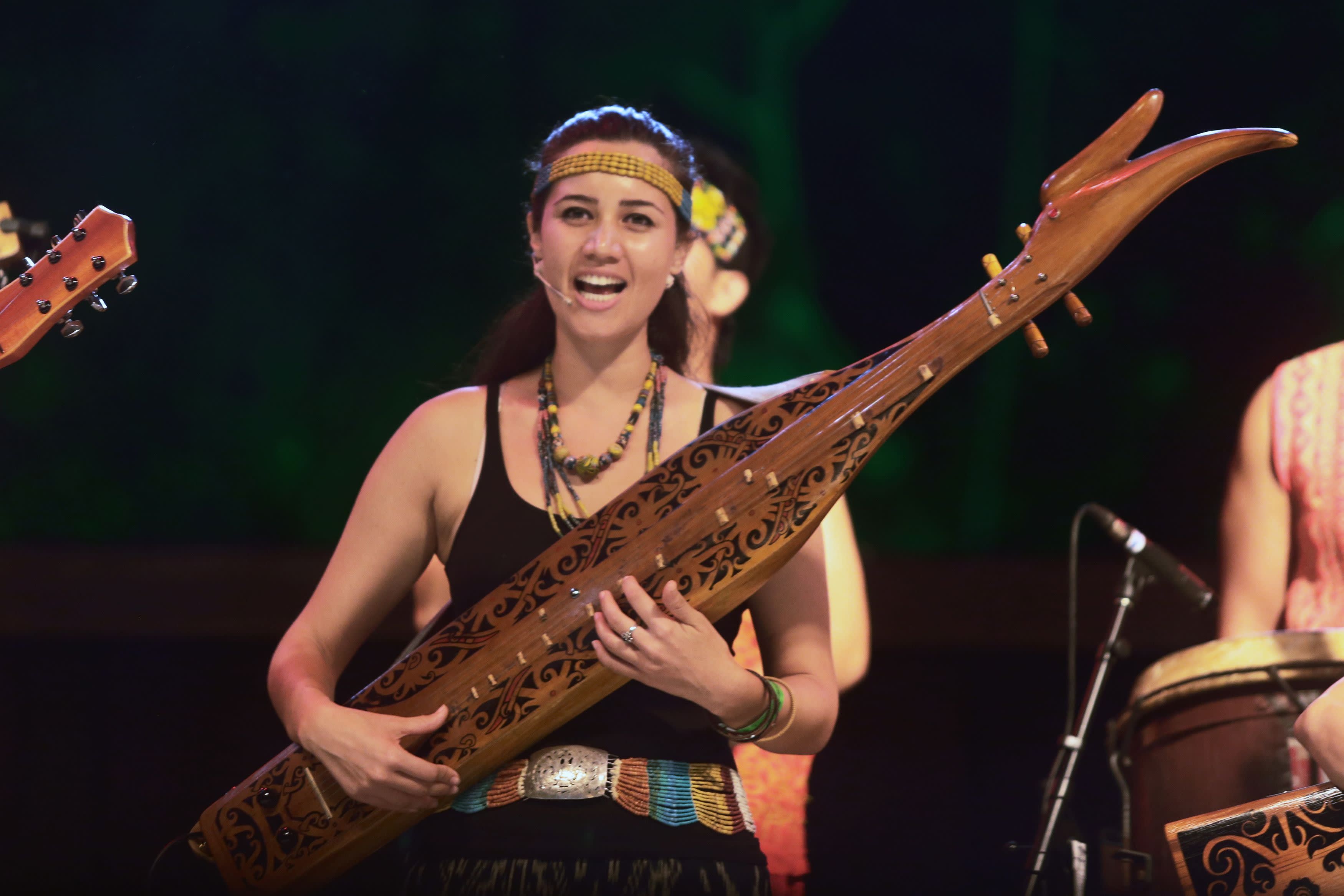 One rarely sees the sape being played, let alone at a children's storytelling session, but Murang, 27, often uses the heavy wooden instrument to accompany her renditions of traditional songs, keeping alive the music of her ancestors.

"These sorts of small, intimate sessions are the best," Murang said, perched on a high stool and surrounded by colorful beanbags and mats at the Kuala Lumpur gallery. The songs used to be sung by firelight, during evenings in the communal longhouses of Sarawak, a Malaysian state on the island of Borneo.

The sape, carved from a single piece of wood measuring more than 1 meter, is a traditional stringed instrument played by indigenous people living in the mountains near Sarawak's Baram River. It is enjoying a resurgence in Malaysia, where the few remaining makers of traditional instruments cannot keep up with demand.

"In the last five years, I've noticed a much bigger takeup of the sape," said Murang, who is frequently asked to recommend sape teachers. The musician draws the tree of life, an iconic motif of the upriver indigenous people, in her family longhouse. (Photo by Anderson Kalang)

Her first album, "Flight," featured five traditional songs sung to sape accompaniment, and quickly sold more than 1,000 copies after its release last year. Since 2015 she has performed in London, Paris, the Netherlands and the U.S., as well as at the Rainforest World Music Festival in Kuching, the capital of Sarawak, and the George Town Festival in the Malaysian state of Penang.

George Town Festival director Joe Sidek, who invited Murang to join the festival's opening show in 2016, said he is intrigued by her talent. "It's fascinating to see a young person go on a journey to learn an instrument that very few young people would take up, and make beautiful music from it," he said.

STARTING OUT Murang began studying the sape, and learning the old songs, as a teenager. Part-European, she grew up in Sarawak, and says her identity was formed by her descent from the Kelabit people, who form one of the smallest ethnic groups in the state. The Kelabit traditionally lived in longhouses among the isolated mountains of central Borneo, but many now live and work in cities.

Murang said the Kelabit's hold on their culture weakened during her father's generation, when many began leaving their villages for the cities. In her father's remote village of Long Peluan, then several days' walk from the nearest town, children would leave home for boarding school at the age of 12. Most never returned, except during school holidays.

"At that time, there was a lot of emphasis on mainstream education, English and so on, and they also did not spend a lot of time with their parents. There was no emphasis on their culture," she said. The upriver settlements had also converted to Christianity, and many of the old songs were gradually dropped -- especially those about love affairs and animal sacrifices, which came to be considered inappropriate.

BREAKING TRADITION When Murang began learning the sape, her teacher -- master sape player Matthew Ngau Jau -- was initially hesitant about teaching her. Traditionally, girls did not play the sape, or even touch it, because they were thought to bring bad luck. Ultimately, however, the importance of the instrument's heritage finally convinced Murang. "We certainly didn't realize the significance at that time," she said.

Recording the music presented unique challenges. The pieces do not have titles, singers have their own versions, and it is common for lyrics to be changed as the songs are sung. The songs also have no fixed endings -- typically, they finish when the singer stops. 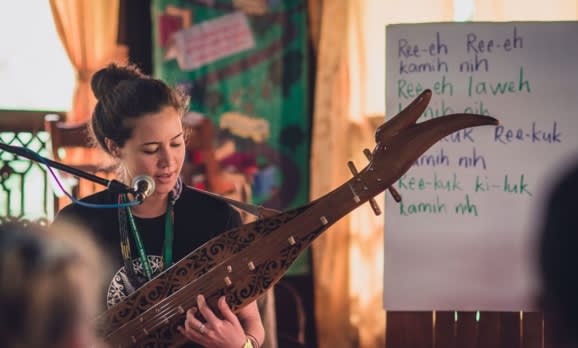 Murang plays the sape at a children’s workshop at the Rainforest World Music Festival in Sarawak. (Photo by Awanawang)

Murang's cousin, a music producer, crafted the melodies into recognizable structures, with permission from the elders who taught the tunes. The sape provides the main accompaniment, but instruments such as the cello are also featured. "Fusion music is more often pop or rock in nature, but I didn't want that. I want to retain a certain emotion, a certain nostalgia, a call for people to remember life in the longhouse and nature," she said.

Murang does not categorize her work as conservation, or even as traditional. Her approach is that of an artist, rather than that of a conservationist or academic. She describes her music style as contemporary and indigenous, and as a reflection of an evolving Kelabit culture.

"We have lost a lot of the old values as we focus on material growth, and I include myself," she said.

Murang is now planning to learn other traditional instruments such as the pagang, which is made of bamboo, the lutong, a sape intended for women, and the jaw harp. These, she said, do not get as much attention as the iconic sape, but are just as important to her people's heritage and culture.