SEOUL/JEJU, South Korea Around 20 wind turbines spin at the Sinchang Wind Power Complex, off the western coast of Jeju, a popular resort island in South Korea. 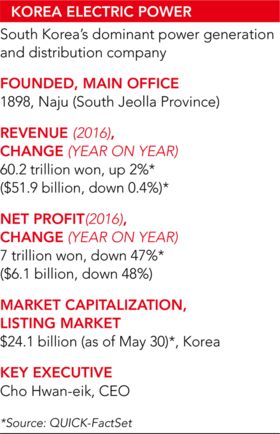 The turbines, run by a subsidiary of Korea Electric Power, better known as Kepco, are part of a project to produce all power on the island, which is serving as a test bed for energy technologies, from non-carbon energy sources by 2030.

It is also part of a broader effort by state-owned Kepco, the country's dominant power producer, to increase its capacity in renewables, which include wind power and solar energy. According to the company, it wants renewables to make up 11% of generating capacity by 2029, up from 6% last year. The new administration of President Moon Jae-in has set an even more ambitious target. It wants 20% of the country's electricity to come from green sources by 2030 to reduce South Korea's dependence on nuclear power and coal.

The energy ministry said on May 30 that it would temporarily suspend in June eight coal-powered plants that are at least 30 years old, before shutting them down completely by the end of Moon's five-year term in 2022. The announcement came two weeks after the new president ordered the suspension of 10 older coal-powered plants to reduce air pollution. Two of them were excluded from the suspension to ensure a stable supply of power to the country's southwest.

Moon is also hoping to phase out nuclear power due to safety concerns, although the time frame is unclear. He has already promised not to build any new nuclear power plants and to halt construction on two plants currently being built.

The announcement hit Kepco's share price hard, as investors worry about the company's operating costs. Kepco's share price has fallen by 13.8% from its year high on March 23 to 42,250 won on May 30, while the benchmark KOSPI index has risen by 8% over the same period, hitting a record high of 2,355.30 on May 26.

With less nuclear and coal power available, Kepco will have to rely more on liquefied natural gas, which will squeeze profit margins. Nomura analyst Cindy Park estimates that Kepco's net profit will decline by 6% if there is a 6.5% increase in LNG power generation to offset a 5% fall in coal power, for example.

"The Moon Jae-in government's policy to cut coal-powered generation and increase LNG generation has been weighing on Kepco's stock price recently because of worries over higher fuel costs," said Shon Ji-woo, an analyst at SK Securities. "Investors are concerned that generation from expensive LNG will increase, while that from cheap coal will diminish."

COST OF CHANGE Kepco relies heavily on coal and nuclear power, with coal accounting for 29% of generation and nuclear 22% as of last December, according to the company. Sean Hwang, an analyst at credit ratings agency Moody's, said the temporary closure of the coal-fired power plants, "which aims to curb the country's airborne particulates, is a credit negative for Kepco because a reduction in coal-fired generation means increased reliance on more expensive gas-fired plants, thereby lowering operating cash flow." 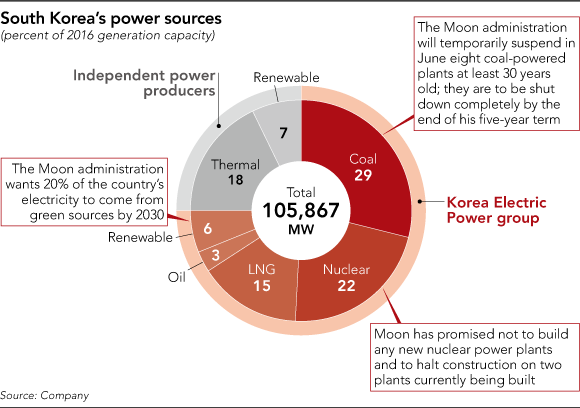 Poor performance in the first quarter also contributed to the decline in the share price. The company posted 15.1 trillion won ($13.5 billion) in sales in the January-March period, down 3.4% on the year, while net profit attributable to shareholders tumbled 59.3% to 869.5 billion won. 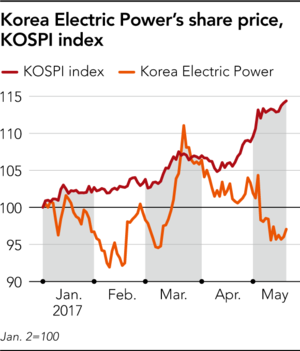 Analysts said this is largely due to increased purchases from independent power producers, as well as rising energy prices. "Kepco increased power supplies from outside the company, resulting in reducing operating profits by 754.3 billion won," said Kang Seong-jin, an analyst at KB Securities. "Prices for coal and oil also increased, hiking fuel costs by 15.8%."

Paik Un-gyu, an energy engineering professor at Hanyang University in Seoul who devised Moon's energy policy, said Kepco needs to change to cope with the switch from nuclear to renewables.

"Kepco should lead big renewable energy projects alongside small and medium-size enterprises. The company also should change the structure of the power industry by adopting platforms based on the 'internet of energy,' rather than distributing and selling electricity," said Paik, referring to the use of digital technology to make energy use more efficient.

Paik said Moon's energy policy "reflected social demands for renewable energies based on the need for clean air and public safety." The policy was based on a review of energy policies in the U.S., Germany, the U.K., France, Japan and China. Analysts said Kepco will be under pressure to adopt such changes quickly due to its state ownership and role as the country's main power utility. The government owns 51.1% of Kepco, including 32.9% held by the state-run Korea Development Bank.

"Kepco is likely to invest in developing renewables and retrofit its existing coal-fired power plants to meet stricter environmental regulations. The government will continue to want Kepco to implement the country's energy policy," said Hwang.

TIME FOR ACTION In response to the government's recent action on coal-fired plants, Cho Hwan-eik, Kepco's chief executive, held an emergency meeting with the heads of 5 affiliates on May 19 to plan how to cut particulates from coal-powered plants by half, from 174,000 tons in 2015 to 87,000 tons by 2022. Kepco said it would invest 7.5 trillion won over the next five years to improve equipment and emission measurements.

But the company is waiting on the government to come up with a long-term plan, especially regarding the ambitious renewables target, which goes beyond Kepco's own ideas. "At this moment, we don't have any specific plan for an energy policy, which is determined by the government's energy-supply plan," said Kim Hyung-kwan, a Kepco spokesman. The energy ministry said the new government has set a clear target -- for 20% of all power generated in the country to come from renewable sources by 2030. One government energy official said the new guideline presents a dilemma, since the need for an environment-friendly policy must be balanced against the supply and demand situation -- and take into account economic efficiency.

If the government plan regarding greener energy is to be implemented, Kepco will want to pass on the higher cost to customers, as renewables are more expensive than coal or nuclear. Paik hinted that electricity bills, which are among the lowest in the region, may rise. But he also stressed any price hike would be kept to a minimum.

The new administration's energy policy throws into doubt South Korea's earlier effort, led by Kepco, to export nuclear technology and reactors. The company was running 36 energy projects in 24 countries as of March, including an $18.6 billion nuclear deal signed in 2009 for four reactors in the United Arab Emirates. Kepco is designing and building the reactors. It is also supplying nuclear fuel and providing technical support and training.

Kepco has also been in talks with Japanese electronics company Toshiba about buying its 60% stake in U.K. nuclear power company NuGen. Paik said Moon's advisers did not discuss the future of the overseas nuclear deals, while Kepco said it is still discussing NuGen with Toshiba.

Critics say Kepco is ripe for reform. Its employees are well-paid and enjoy job security, reflecting the company's near monopoly over South Korea's power industry. Kepco is the most sought-after employer among state companies for university graduates and other job seekers, according to a recent survey by Saramin, an online job search company.

A HISTORY OF CHALLENGES Kepco is often called the "workplace of God" because of its favorable working conditions. The average Kepco employee salary was 79 million won in 2015, according to the finance ministry, more than twice the national average. Employees are guaranteed jobs until age 60, while most South Korean companies try to retire workers when they are still in their early 50s. But the new energy policy may force Kepco to rethink its generous employment practices.

Things have not been all smooth sailing for Kepco. It has had to confront a number of challenges since it was founded in 1898 as Hansung Electric Company and managed by two American engineers. It survived the Korean War and played a key role in the country's rapid modernization that began in the 1960s.

In 2001, Kepco's grip on the power market was loosened when the government allowed other companies to generate electricity under a liberalization program. Since then, these independent power producers, which include Posco, SK and GS, can sell power through the Korea Power Exchange. They accounted for 25% of total generating capacity in 2016, and the government hopes to increase their share to 34% by 2029.

Kepco also adopted a decentralized structure, creating six affiliates responsible for power generation in separate regional markets, while the parent company focused on the distribution of electricity. But Kepco is not enthusiastic for further liberalization.

Analysts said another problem with Kepco is that it is bureaucratic, behaving like a government ministry despite being a commercial enterprise. Government officials often land top management jobs at Kepco after retiring from the civil service. 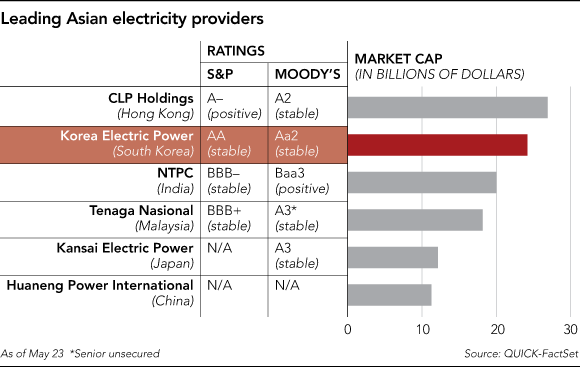 The 64-year-old Cho, for example, was a veteran bureaucrat, serving as vice minister at the Ministry of Commerce, Industry and Energy before his appointment as Kepco chief executive in 2012. His predecessor was forced to resign over a scandal. Cho has been credited, however, with improving the company's performance, which is why he is in his third term as CEO. That term ends in March 2018.

Other key posts are often given to lawmakers who lost elections, or to retired heads of government agencies. The company's auditor, Lee Sung-han, is a former head of the National Police Agency with little knowledge of the energy sector. Cho Jeon-hyeok and Lee Kang-hee, former lawmakers, have been outside directors at the company since 2014 even though they lacked experience in the industry.

Kepco has also been accused of acting arrogantly toward the public. Several years ago, the utility clashed with residents of the village of Miryang over the building of power lines. The villagers, many of them elderly, alleged that Kepco sought to buy the support of residents, dividing the community. The company also called in the police to remove local protesters.

Moon's election is not all bad news for Kepco: The new president is likely to oppose moves to privatize the company, an idea that had been discussed by previous conservative administrations. Rather, he believes government agencies and companies, including Kepco, should play a bigger role in tackling social problems.