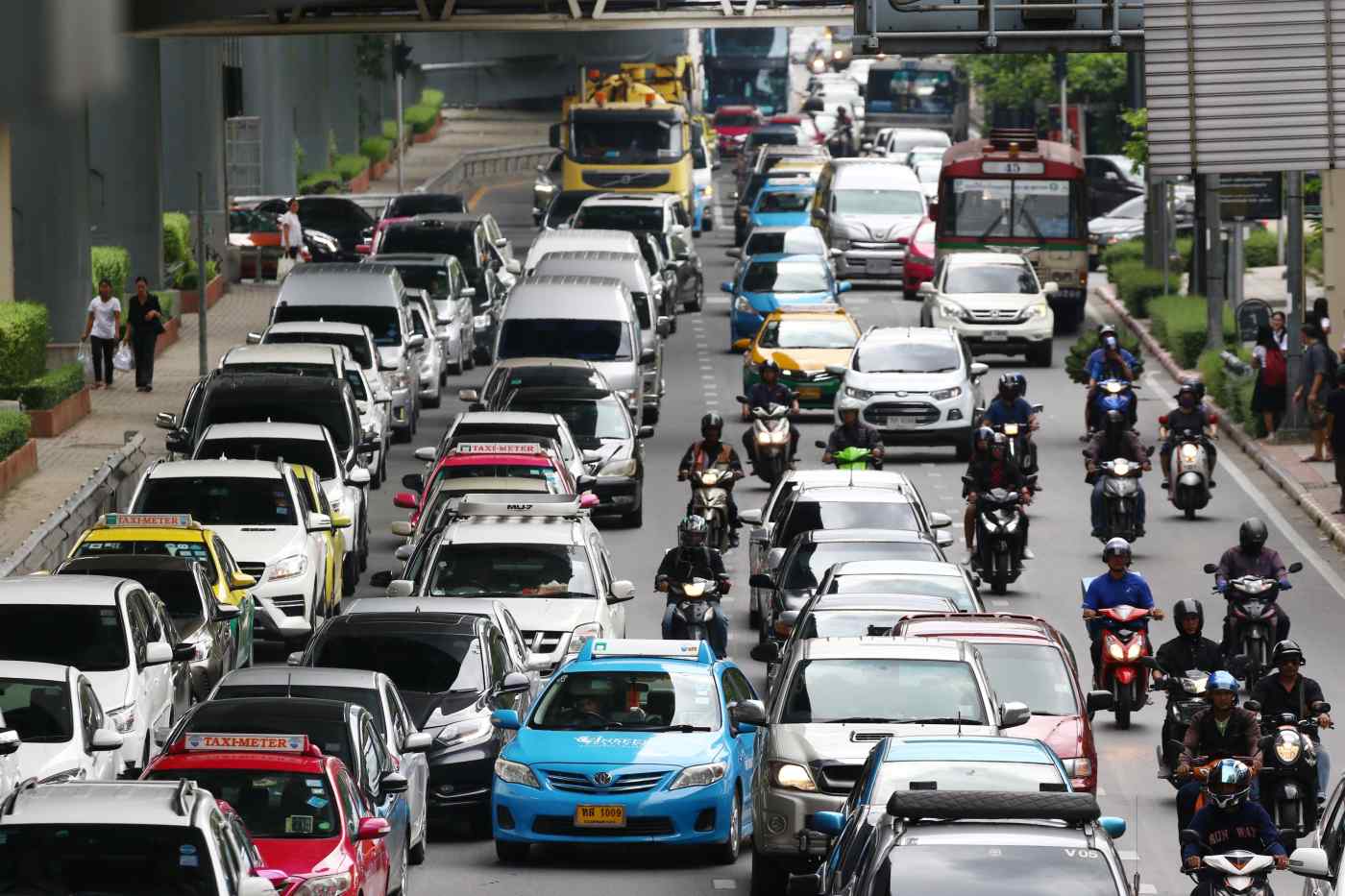 BANGKOK To get an idea of just how dramatically Asia's auto industry is changing, one need only look at Southeast Asia and India, where Chinese newcomers are looking to make inroads even as traditional heavyweights bow out.

Take the recent surprise out of Malaysia.

On May 24, DRB-Hicom announced that it will sell a 49.9% stake in Proton Holdings, the maker of Malaysia's "national car," to Zhejiang Geely Holding Group of China. The Malaysian automotive conglomerate had spent nearly a year searching for a foreign partner to help turn the long-struggling Proton around before settling on Geely, which also owns Volvo Cars of Sweden.

Syed Faisal Albar, DRB-Hicom's group managing director, and Geely Holding Group chief financial officer Li Donghui attended a signing ceremony in Putrajaya, Malaysia. "We understand that Proton is very much loved by Malaysians," Li said, promising to retain the Proton badge. He then revealed an ambitious plan for the company: to nearly quadruple annual production capacity to 3 million vehicles by 2020, of which 500,000 will be made in Malaysia.

Not everyone was happy with the news. Former Prime Minister Mahathir Mohamad said he shed tears over the sale of the carmaker he founded in 1983. "I am sad," he wrote in a blog on May 25. "Proton can no longer be national ... my child is lost."

OUT OF THE SHADOW The auto markets of Southeast Asia and India have long been overshadowed by China's, the world's biggest, but their rapid expansion is now making them the center of global attention. About 3.2 million cars were sold in Southeast Asia in 2016, while about 3.8 million were sold in India in the 12 months through March. Combined annual sales in these markets are double the figure for Germany, Europe's largest market, and they are only expected to rise as their populations grow larger and richer.

Geely is not the only Chinese automaker that has its eye on Southeast Asia. State-owned SAIC Motor has been producing vehicles under the MG brand in Thailand since 2014 in partnership with local conglomerate Charoen Pokphand Group and is now building a plant with annual production capacity of 200,000 vehicles. Geely, for its part, is looking to save time and effort by buying Proton, which already has an established brand and output capacity.

Having effectively shut themselves up in the massive domestic market for decades, Chinese automakers are now getting restless for global expansion.

"Geely aims to be a mainstream carmaker in the world, so it's not realistic for us to sell in China alone. We need to go abroad and this goal will remain unchanged," said Gui Sheng Yue, chief executive at Geely Automobile, the Hong Kong-listed arm of Geely Holding, on May 25.

Four Chinese automakers were in the global top 20 in terms of vehicle production in 2015, according to the International Organization of Motor Vehicle Manufacturers, a Paris-based international trade association. SAIC, ranked 13th, was the largest among Chinese producers, rolling out 2.26 million vehicles and surpassing Daimler of Germany and Mazda of Japan. Geely, which was founded by entrepreneur Li Shufu, just missed the list, coming 21st with an output of around 1 million units.

Chinese automakers have a far larger presence if their partnerships with foreign manufacturers in China are taken into account. Including sales through joint ventures with Volkswagen of Germany and General Motors of the U.S., Shanghai-based SAIC sells nearly 6.5 million vehicles a year, putting it well ahead of the likes of Honda Motor or Nissan Motor.

UNASSAILABLE OPPONENTS Henry Ford released the Model T in 1908, marking the birth of the mass-market automobile. Since then, only the U.S., Japan, South Korea and a handful of European countries have produced automakers capable of competing globally. For Chinese carmakers looking to join that exclusive club, the nearby markets of Southeast Asia are the perfect beachhead from which to launch their global offensive.

Newcomers may have good reason to think twice before seeking a slice of that pie: Japanese companies control some 90% of the Southeast Asian market. And while many of the region's 600 million people are familiar with Toyota Motor's Camry, few could likely name an SAIC or Geely model -- the result of Chinese makers' relentless focus on their home market.

Geely, however, is undaunted. "[Geely and DRB-Hicom] aim to build Proton into the most competitive brand in Malaysia and a leading brand in Southeast Asia," Geely said in a statement. To do that, the carmaker must first revamp Proton's stale image. The brand is losing ground even at home, where rival Perodua, backed by Toyota subsidiary Daihatsu Motor, leads the market by a comfortable margin.

As it pursues its ambitions in Southeast Asia, the Chinese automaker would do well to heed the harsh lessons GM learned in another fast-growing market.

In India, Japanese companies control about half of the market. Combined with South Korea's Hyundai Motor, that figure rises to more than 60%. Despite the presence of well-established rivals, GM was determined to make inroads in the country, introducing the Chevrolet Spark in New Delhi in April 2007. At the time, then-Chairman and CEO Rick Wagoner said the company needed to be a leader in emerging markets if it was to be a leader in the global industry.

The following year, the American automaker nearly quadrupled its annual output capacity in India to over 225,000 units. This was an extremely aggressive decision, given that it controlled just 3% of the local market.

Wagoner's ambitions proved no match for competition from Hyundai and Japan's Suzuki Motor, and on May 18, GM announced that it will stop selling cars in India by the end of this year. "The increased investment originally planned for India would not deliver the returns of other significant global opportunities," Executive Vice President Stefan Jacoby said in a statement. "It would also not help us achieve a leadership position or compelling, long-term profitability in the domestic market."

GM, one of the world's three largest automakers by unit sales, is now narrowing its focus. It plans to stop producing sedans in Thailand and concentrate instead on SUVs. At the same time, it is moving more of its resources into North America and China, which account for more than 70% of its global unit sales.

Volkswagen is also focused on extending its strengths. China's JAC Motors has received regulatory approval to jointly produce electric vehicles with the German automaker. This marks Volkswagen's third partnership with a Chinese peer, while it has made few, if any, inroads in Southeast Asia.

DIGGING IN As GM found out, established players will not cede market share without a fight. Toyota already commands 50% of the Indonesian auto market, the biggest in Southeast Asia, and more than 30% of Thailand's, the second largest, on a group basis. The company is now revamping the way it develops cars in the region. On April 3, Toyota's development company in Thailand changed its name to Toyota Daihatsu Engineering & Manufacturing, marking the launch of a joint project between Toyota and its subsidiary Daihatsu, a leading maker of mini-vehicles. The aim is to develop small, inexpensive cars for emerging markets.

"We would like to learn and receive technical assistance from Daihatsu on making good-quality vehicles at affordable prices and also on developing human resources who have both the knowledge of Toyota and Daihatsu car-making," TDEM President Tatsuro Takami said in a statement.

Nissan, which has been trailing other Japanese carmakers in Southeast Asia, invested in Mitsubishi Motors, which has a formidable presence in the regional market, in October 2016, adding it to its global alliance with Renault of France. As a result, the alliance's market share in Southeast Asia is estimated to have increased to around 10% from 4.5%. Nissan and Mitsubishi plan to introduce common parts and platforms and integrate logistics in a bid to close in on Toyota and Honda.

Hyundai, second largest player in India, plans to bring in Kia Motors, a company under its umbrella, to boost its share of the local market.

Kia said on April 27 that it will spend some $1.1 billion to build a plant in the state of Andhra Pradesh with an annual production capacity of 300,000 vehicles. The plant is slated to start operating in the second half of 2019 to churn out compacts and SUVs for domestic sale.

THE NEXT BATTLEFIELD It is too early to say whether Chinese players will succeed in their new markets or whether they will go the way of GM. Geely currently sells more than 95% of its cars at home. Its SUVs, priced at just 100,000 yuan ($14,500), are especially popular there, with unit sales jumping 50% to about 766,000 last year. If it can transfer its know-how for making cheaper vehicles to Proton, it has a fair chance of reaching those Southeast Asian customers who cannot afford a Japanese car.

Success in Southeast Asia, however, may ultimately have less to do with conventional manufacturing ability and more to do with the transformation that environmentally friendly vehicles are bringing to the industry.

In 2015, China overtook the U.S. as the world's largest market for electric and plug-in hybrid vehicles, with sales totaling some 340,000 units, according to the China Association of Automobile Manufacturers. The Chinese government's aggressive promotion of electric vehicles has spurred domestic automakers to accumulate relevant technologies.

Interest in eco-friendly vehicles is growing in Southeast Asia, too. The government of Thailand has recently drawn up measures to promote companies producing electric vehicles in the country.

But even in Thailand, the regional leader in electric vehicle adoption, the acute shortage of public charging facilities means the technology is unlikely to catch on with the general public anytime soon.

Nevertheless, Chinese automakers may want to wait until electric vehicles take off before trying to crack Southeast Asia's auto markets. The hold that conventional carmakers have on the region may prove to be just too strong to break.