ASEAN exports and consumption are up, but for how long?

Positive outcomes depend on good government policy and regional security

SINGAPORE/MANILA One weekend in late May, car dealerships in Singapore's Queenstown were packed with families and middle-aged couples hunting for new cars. Brochures in hand, a 50-year-old businessman had been visiting showrooms of upscale brands such as BMW and Volvo, looking for a second auto.

Singapore limits the number of cars people can own, and purchasing one, regardless of type, is costly enough. But owning two means you are living large. "I can't afford a BMW unless I have some money to spare like I do now," the man said. "I will decide which car to buy the next time I come to the showrooms."

Such signs of increased consumption are becoming more common in Southeast Asia. After remaining sluggish for years, the region's economies are finally heating up. Of the six major economies of the Association of Southeast Asian Nations, Thailand, Indonesia, Singapore and Malaysia saw gross domestic product for January through March grow at a faster pace than their full-year figures for 2016.

Malaysia experienced a robust 5.6% growth while Thailand grew 3.3%. Both are better than the previous quarter. In the Philippines, GDP expanded 6.4% and in Vietnam, 5.1%. Although their growth was slower than their 2016 full-year results, they remain two of the fastest-growing economies in Southeast Asia.

Sales of automobiles -- an indicator of personal spending trends -- rose in March from the same month last year in all six ASEAN majors. Combined sales stood at 317,000 cars, the highest for March in four years.

Personal spending accounts for 70% of the Philippines' GDP. Helping drive this are remittances from the approximately 10 million Filipinos working abroad. They put extra money into the pockets of people like Lian Buan, who works at an online news distributor and is grateful to have parents working in Britain. Inbound money rose 11% on the year in March, marking a monthly record high. 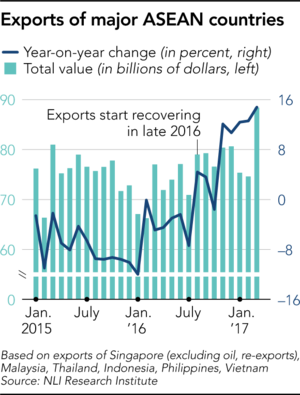 SURGING EXPORTS In Indonesia, which accounts for about 40% of ASEAN's population and GDP, consumption is strong in smaller cities such as Banjarmasin in South Kalimantan Province, home to many resource-related companies.

Since OPEC and some non-members began to cut production in January, oil prices have stabilized while natural gas and coal prices have started to recover. The higher resource prices contribute to export growth by value, helping Indonesia power the region's economy.

Electronics are also pushing up exports. Since the start of the year, U.S. chipmaker Micron Technology's factory in Singapore has been increasing production of a new type of semiconductor for smartphones and other consumer devices, helping lift the nation's exports for the January-March period 15.2% on the year. Exports of integrated circuits, personal computer parts and disk media from Singapore rose 21.5%, 21.6% and 10.3%, respectively. The same trend can be found in Malaysia and the Philippines. Malaysia's total exports by value jumped 21.4% on the year in the same quarter. Electronics, which make up 37% of the total, logged an 18.4% increase from the same period a year ago.

According to NLI Research Institute, the value of combined exports from the six major ASEAN economies in March grew 14.8% on the year, marking five straight months of double-digit expansion. This contrasts sharply with the 21-month export decline they experienced between November 2014 and July 2016.

Behind the region's growing exports is an expanding world economy. Even if the U.S. Federal Reserve raises its key interest rate in mid-June, it will not be enough to significantly reduce the cheap money flooding the market. The huge money supply will continue to stimulate investment and consumption, leading to more orders for Southeast Asian factories.

Exports from the five major ASEAN economies to the European Union is evidence of this, growing 21.4% by value in March on the year. This marked the highest growth among their main export destinations. Exports to East and Southeast Asia rose 20.1% to $42.5 billion and accounted for 57% of the total, buoyed by the Chinese economic recovery.

China's real-term economic growth in the first quarter of 2017 rose 6.9% year-on-year, exceeding the government's 2017 target of around 6.5%. Many economists owe this to President Xi Jinping's pump-priming measures, giving him bragging rights about the improved economy during the Communist Party's National Congress later this autumn.

The Asian Development Bank projects that the region's real economic growth rate, which was 4.7% in 2016, will rise to 4.8% in 2017 and to 5% in 2018. Based on the robust first-quarter figure, some economists see this year's growth possibly exceeding the ADB's forecast.

But Arup Raha, chief economist at Malaysia's CIMB Group, remains cautious: "Export growth has been strong, in part due to Chinese demand, but also due to higher commodity prices. Neither is likely to continue given that China's growth is credit-fueled and unlikely to maintain its current pace."

Future U.S. monetary policy could prompt another money drain from Southeast Asia and cause the region's stock markets and currencies to dive. China's growth may sputter if the government scales back public-sector investments after the National Congress. And if resource prices start to fall again, resource-rich nations such as Indonesia and Malaysia will suffer.

Security is another concern. In late May, Philippine President Rodrigo Duterte declared martial law in the southern part of the country. A recent bomb attack in Jakarta may have been carried out by sympathizers of the Islamic State group.

Such sudden changes in government policy coupled with security problems will affect decision-making for companies.