Multinationals in Asia: Expedia books a trip to the soaring Asian market

Online travel pioneer wants to double its share in the region via tech, takeovers 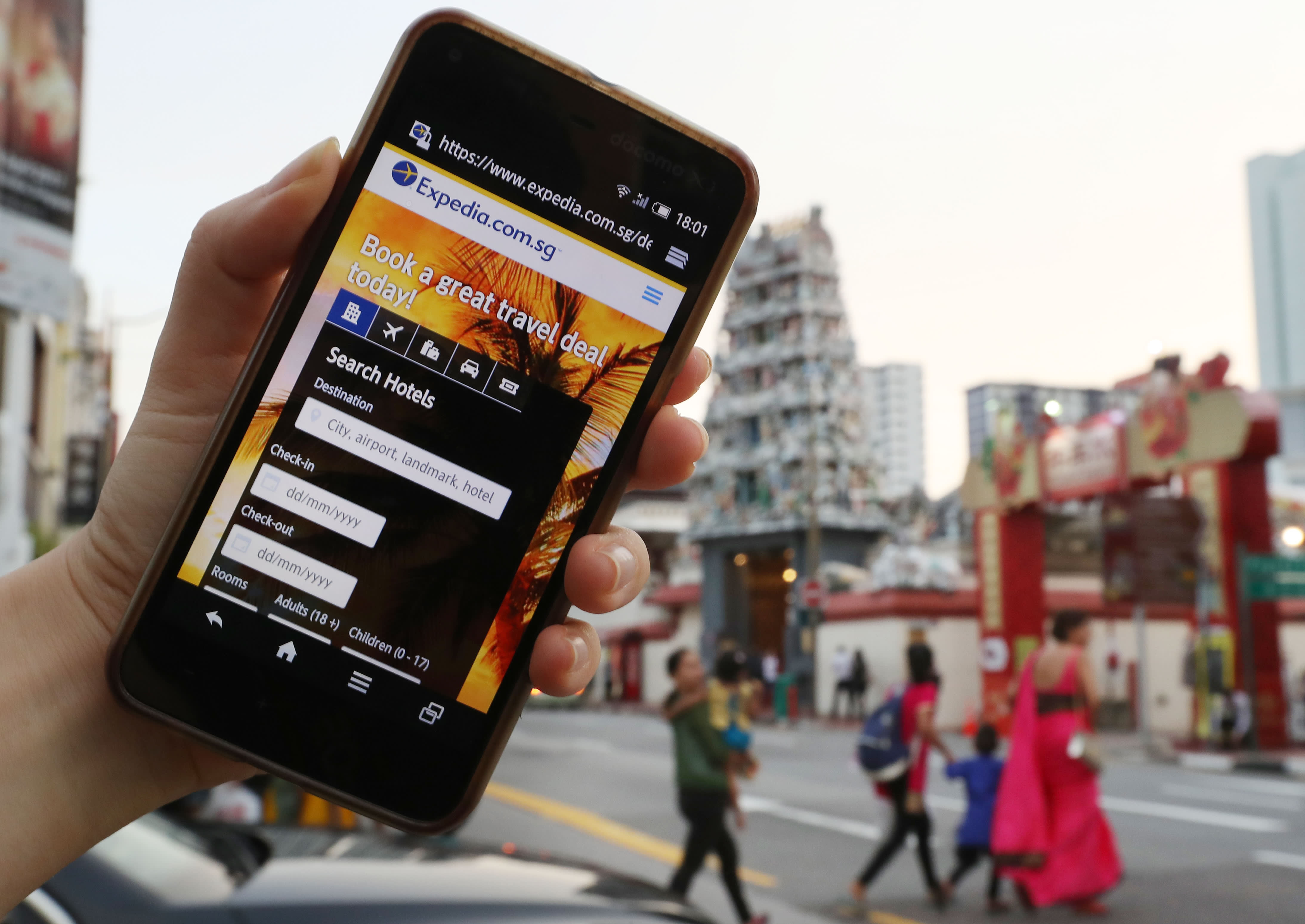 SINGAPORE Dressed casually in a pair of jeans and black jacket, Dara Khosrowshahi spoke with a friendly smile, but with determination in his eyes. "The U.S. used to be the driver of our global strategy and other areas would follow," he said. "But Asia is now driving our strategy." 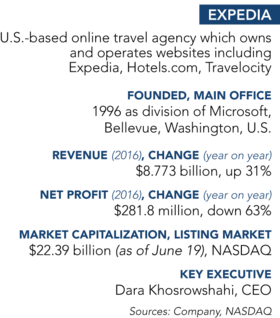 The CEO of Expedia, the world's largest online travel agency, was recently in Singapore for the opening of the U.S. company's first "innovation lab" in Asia. "Our target is to at least double our share of the online travel marketplace in Asia [from the current 5%]," he told the Nikkei Asian Review. "I think we are on our way." 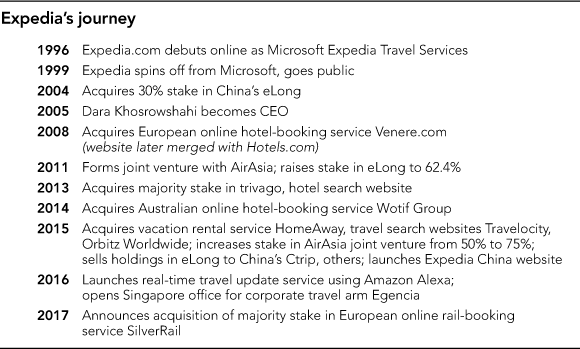 Since it first went online 21 years ago, Expedia has helped change the way people plan their travel, not least by making booking trips faster and more convenient. Launched by a small division of Microsoft, Expedia now runs more than 200 travel-booking websites in over 75 countries, offering 385,000 accommodation options and access to nearly 500 airlines. According to Phocuswright, a travel industry research company, Expedia controlled 35% of the global online travel agency market in terms of gross bookings in 2016.

To put distance between itself and U.S. rival Priceline Group, which controls 33% of the global market, Expedia began a $6 billion splurge in 2014, acquiring reservation websites Orbitz, Travelocity and Wotif, as well as Texas-based vacation rental service HomeAway.

The acquisitions have helped Expedia diversify its revenue streams. Sales from online bookings -- mostly commission fees paid by hotels and airlines -- made up 80% of revenue in 2016, down from 88% in 2014. Takeover and integration expenses hit Expedia's bottom line, with net profit declining 63% on the year in 2016. Despite the profit slide, investors are smiling. Expedia's share price has risen about 30% since January, reflecting hopes that the company will trounce its rivals. Analysts have mostly been positive, with U.S. brokerage Cantor Fitzgerald reiterating its "buy" rating in a recent report.

Expedia's portfolio reads like a who's who of travel websites, including Hotels.com, Trivago and lastminute.com in Australia. These brands serve a vast global customer base, making Expedia hugely attractive for hotels trying to lure guests from outside their domestic markets. And the company's sheer size gives it better bargaining leverage and more capital for technology. In 2016, its splashed out $1.2 billion on technology, up 49% on the year.

Investors may be happy, but Khosrowshahi is still looking for ways to grow, with the company "aggressively investing" to capture a larger piece of the surging Asian travel market. According to the United Nations World Tourism Organization, the number of Chinese outbound travelers increased 6% in 2016. Their spending also increased, rising 12% on the year to $261 billion, continuing the trend of double-digit growth since 2004.

The spending uptick was seen regionwide, rising 28% among Vietnamese, 16% for Indians and 11% among Thais.

Expedia has good reason to focus on Asia, where there is no dominant player. With the exception of China, where domestic operators hold sway, the markets are a mix of local and global players. No single company controls more than 23% of the market in any major Southeast Asian country, according to Euromonitor.

"MOBILE OR NOTHING" The CEO said there are two keys to winning in Asia: knowing Asian consumers and adopting a mobile-first attitude. Tech-savvy, selfie-snapping Asians comprise the world's largest number of smartphone users. According to the GSMA trade group, the number of mobile subscribers in the Asia-Pacific region is expected to reach 2.7 billion this year, over half the global figure.

Expedia already serves many of them. The company runs its own Expedia-branded websites in 14 Asia-Pacific markets, including Australia, China, Thailand and Singapore, most of which have larger traffic volumes coming from mobile users. Globally, the mobile ratio is 45%.

A survey conducted by digital research company Criteo shows that 39% of 1,100 respondents in India, Singapore, Australia, Taiwan, Vietnam and Indonesia primarily use smartphones for booking travel, and 38% book while on the go. "It's mobile or nothing in Asia," Khosrowshahi said.

The company's new Expedia Innovation Lab is where it gets to know Asians better and tailor technology to them. In a small office at its regional headquarters in Singapore, the company conducts tests using sensor technology to understand how people feel when using Expedia. Expedia uses sensor technology to understand how consumers in Asia interact with its website and services. (Photo by Nozomu Ogawa)

Sensor pads applied to a subject's face detect reactions as they browse the Expedia website on a PC. An engineer observes on a display in another room, watching eye movements along with a graphical display of facial muscle movements. A jump in the graph indicates a change of emotion, such as frustration over a fully booked hotel, or excitement over a breakfast photo.

The goal is to understand users' needs and frustrations regarding online travel booking. The test will soon be conducted with subjects using a smartphone. Expedia plans to also perform the tests in such markets as South Korea and Japan.

To drive its Asia-first mobile strategy, the company wants to nearly double its engineering staff within the next five years to 10,000, with a "significant portion" hired locally, according to Khosrowshahi. The company is also employing cloud services in the region to speed up connection times for Asian consumers, who want services to be "super, super fast."

The CEO thinks new technology will change the way people travel, emphasizing that the three Ms -- mobile, messaging and machine learning -- can transform Expedia into a palm-size personal travel coordinator. "You can start creating contextual products and interaction with consumers on [an] individual basis," he said.

For example, Khosrowshahi said, Expedia could add functions that provide real-time travel information on mobile devices. The technology could detect a user's location at an airport and send notifications regarding baggage pickup areas and boarding gates, or suggest dining options based on their habits. Expedia is already rolling out services via Amazon's Alexa intelligent personal assistant feature in the U.S., and will begin testing in Asia this year.

RIDING THE TIGER As Expedia doubles its share of the Asia-Pacific online travel market from the current 5% over the next five years, Khosrowshahi expects the region to account for "well over a third" of the company's total bookings. This would increase the gross number of bookings from its non-U.S. businesses from the current 36% of the total to about 66%.

But the company realizes that investing in technologies is not enough to succeed in the region. That is why Expedia is also keen to strengthen its Asia-specific services through partnerships and possibly acquisitions.

Outside Asia, the company is known for its aggressive acquisitions. Since Khosrowshahi took over in 2005, Expedia has acquired a number of online travel-related companies, including car-rental and rail-booking services. "Acquisitions and strategic alliances are playing a central role in Expedia's development," noted Euromonitor's Geerts.

But given Asia's diversity, Expedia cannot win by simply employing successful models from its home market, which is why Khosrowshahi is pushing for more strategic alliances in the region.

Expedia has already made a powerful one with Malaysian budget carrier AirAsia. In 2011, they created AAE Travel, which operates travel-booking website AirAsiaGo. As an official third-party online distributor for the airline through the venture, Expedia is allowed to bundle AirAsia flights with hotel stays for big savings.

Still, partnerships and takeovers do not guarantee growth. Expedia has in fact done little shopping in the region. Chetan Kapoor of Phocuswright pointed out that most of the local travel websites in Southeast Asia are still trying to build up their customer bases and are therefore offering massive discounts. Profits have yet to materialize, which may be working against companies like Expedia. "Asia-Pacific is ... a region where Expedia has yet to achieve a strong market share, especially after the sale of eLong in 2015," noted Geerts. In 2015, Expedia sold its majority stake in Chinese online travel agent eLong to Ctrip, the largest player in China. ELong's poor earnings had been hurting the U.S. company's bottom line.

Although Expedia struck a partnership agreement with Ctrip, its footprint in China has been limited so far -- especially given that Expedia's largest rival, Priceline Group, owns around 9% of Ctrip. Expedia launched its own Expedia China website the same year it divested from eLong, but its market share remains tiny. 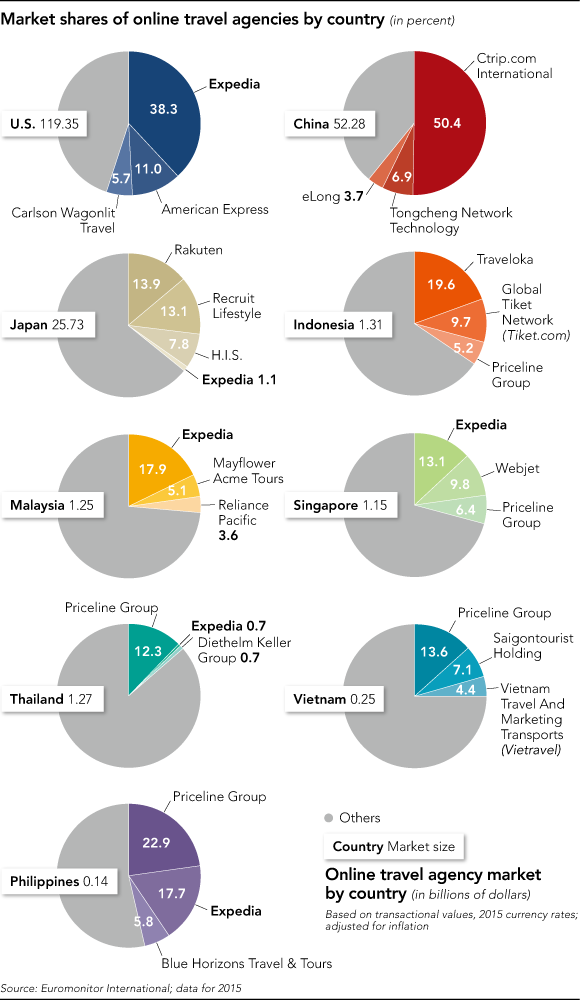 Priceline also has a stronger foothold in emerging Southeast Asian markets, thanks to the acquisition of Singapore-based online hotel-booking service Agoda in 2007. While Expedia has a larger market share in developed markets such as Japan, Malaysia and Singapore, Priceline is winning in Indonesia, Vietnam, Thailand and the Philippines, according to Euromonitor.

The industry is seeing new entrants from peripheral sectors, too. Airbnb is swiping guests from the hotel industry, and travel review site TripAdvisor is adding instant-booking features. Piling on is Google, which is enhancing its travel-related services and could roll out direct-booking functions. This could prove a huge disruption to Expedia and others.

Still, the CEO is optimistic, especially about Asia. He is confident that turning his cadre of bright young engineers loose on the region's growing numbers of middle-class travelers and smartphone users will combine to lay the foundation for a new travel business model.

"The combination will allow Expedia to [go] back to where we came from: a travel agent who knew us, who knew our family, what kind of hotels we like," Khosrowshahi said. "I think that is going to be pretty darn exciting."