At 50, ASEAN is reaping the rewards of economic integration BANGKOK The Association of Southeast Asian Nations marks its 50th anniversary on Aug. 8. Over the decades, its purpose has shifted from fighting communism to fostering economic cooperation. ASEAN's rules and infrastructure facilitate trade and help companies widen their value chains. We look at the latest developments in "ASEAN-style management" to understand the dynamism of the region and its challenges.

At Toyota Alabang, a Toyota Motor dealership in the suburbs of Manila, Neil Ramos sizes up the models on offer. Ramos, a local restaurant owner, is thinking about buying a new car to drive his 7-year-old daughter to and from school. His first choice is likely to be the Fortuner, an SUV that Toyota developed for emerging economies. It sells for around 1.5 million pesos (about $30,000), a reasonable price for someone in the Philippines' upper-middle class.

Toyota cars sent from Thailand’s Laem Chabang Port are exported to other ASEAN countries (L). Customers check out cars at the Toyota Alabang showroom in the suburbs of Manila on July 19(R). (Photos by Nozomu Ogawa)

The Fortuner is made in Indonesia, but another model on display, the Hilux pickup truck, is made in Thailand, while the Vios subcompact sedan is produced in the Philippines. That Toyota Alabang, which sold 6,700 vehicles last year, can offer cars made in so many different countries is a testament to how far economic integration has come in the Association of Southeast Asian Nations. And as Ramos said, "If it is a good brand, it doesn't matter where the car is coming from."

HERE AND THERE Making vehicles in different countries means making their parts in different countries, too. If Ramos changes his mind and decides to buy a Hilux, Toyota in Thailand, which has assembly plants there, will order about 2,000 parts to produce the pickup. Some of those parts will arrive from Yazaki (Cambodia) Products, a group company of Japanese autoparts supplier Yazaki.

Yazaki Products is located in the southwestern Cambodian province of Koh Kong in an industrial park looking out on the Gulf of Thailand, about 2km from the Thai-Cambodian border. The company, which supplies Mitsubishi Motors as well as Toyota, has been producing wire harnesses since 2012. Several thousand people work for Yazaki, making the company one of the largest employers in the area. Its workers are young, averaging just 22.7 years old.

Making wire harnesses, which consist of hundreds of cables and terminals, is labor intensive. Yazaki chose Cambodia because it was looking for young workers with lower wage levels than their older, more experienced counterparts elsewhere. The minimum wage in Cambodia when the company brought the factory online was $61 per month, about 20% of the level in Thailand.

But the choice to follow lower wages came at a price, at least initially.

"It was troublesome at the beginning because many workers showed up late or were absent from work without providing advance notice," said Yukitoshi Ota, a director at the company. "No one knew any of the rules for working in a factory."

Yazaki appointed more than 10 Thai employees with over 20 years of experience to train Cambodian workers. Now, the factory is catching up with the 50-year-old plant run by a subsidiary in Thailand.

It takes 10 hours for a truck to bring parts and raw materials to the Cambodian factory from Thailand and then deliver the completed wire harnesses to assembly plants in Thailand. But even factoring in the time and cost needed to make the round trip, producing wire harnesses in Cambodia is less costly than in Thailand. The auto industry has been a major driving force behind ASEAN's industrialization. Automakers in the region churn out 4 million vehicles a year, not far behind South Korea, the world's sixth-largest car producer. Thanks in part to the bloc's progress in lowering trade barriers, autoparts and vehicles now regularly cross national borders. This freedom of movement has helped the industry's complex supply chains expand into developing countries such as Cambodia and Laos, which joined ASEAN later.

ACROSS BORDERS Toyota, the largest carmaker in the region, produced 1.1 million vehicles there in 2016, accounting for 12% of its global total. It assembles vehicles in nine plants in five ASEAN members. 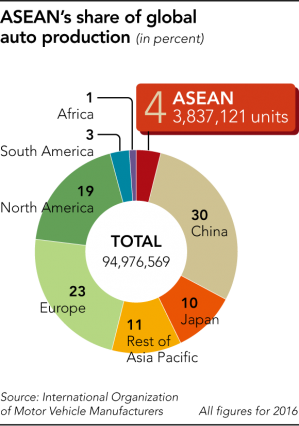 In addition to economies of scale, TAP also benefits from the Philippines government's special economic zone policy, which encourages exports. The company, which exports 95% of its products, enjoys a special corporate tax rate of 5% rather than the usual 30%. If Ramos chooses a Hilux, which uses a manual transmission made in the Philippines, it would mean that part will cross the ocean once to be installed in the pickup and then again when it returns to the Philippines as part of the finished vehicle.

Some parts produced by Yazaki in Cambodia and TAP go to the Ban Pho plant in Thailand run by Toyota Motor Thailand. According to Kazuhiro Ishikawa, senior division coordinator of the plant's administration department, the plant assembles 650-700 vehicles a day --- the Hilux and the Fortuner --- using about 5,000 kinds of parts and preassembled units. Workers assemble an engine and transmission at Toyota’s Ban Pho plant in Thailand on July 6. (Photo by Nozomu Ogawa)

Transmissions with the maker code 811W-A, indicating they are made by TAP, are stored in a corner of the plant's parts warehouse. In the production line about 10 meters away, engines and transmissions are put together. Wire harnesses made by Yazaki in Cambodia are then attached to engines. The Hilux can be called "the ASEAN vehicle," as about 95% of its parts are procured from within the bloc.

Japanese carmakers control more than 80% of the ASEAN auto market, and they are the only ones with such complex supply chains in the region. Their strategy of setting up production bases in as many countries as possible suits member countries that are eager to attract manufacturing jobs.

German brands Mercedes-Benz and BMW are leaders in the luxury auto segment in ASEAN, but their production volume in the region is small, so local parts procurement is not cost-effective for them.

The Ban Pho plant is both the end point of Toyota's regional parts procurement network and the starting point of its supply network of assembled vehicles. Laem Chabang Port, Thailand's largest port, is located about 80km from the plant. Toyota's vehicle yard can accommodate up to 11,000 vehicles while they wait to be loaded onto ships bound for other countries.

On July 7, the Polaris Leader, a car carrier chartered by Japanese shipping company Nippon Yusen, arrived at the port. The ship has a carrying capacity of about 5,000 vehicles and takes two days to get to Singapore, and a day and a half more from there to Jakarta.

A GROWING WEB Complex as they are, auto supply chains in ASEAN are still growing and evolving.

Mitsubishi plans to start mass-producing its new seven-seater passenger vehicle in September at a recently opened plant in Indonesia. Toshimi Soeda, assistant director of purchasing, and his coworkers started scouting parts suppliers in 2013. This involved sending engineers to audit the quality control and production management of potential suppliers. Over the past four years, Soeda's team has selected more than 100 local suppliers that will provide 65% of the parts for the new vehicle.

"We will find out the real capabilities of these parts makers after mass production begins," Soeda said.

When malfunctions or other problems occur, he and his team send a task force to find out why. Such efforts to strengthen supply chains are vital given automakers' growing reliance on local procurement. As ASEAN prepares to scrap in principle all intraregion tariffs in 2018, Myanmar, Cambodia, Laos and Vietnam will likely play an even bigger role in car companies' sprawling supply chains. Thailand, on the other hand, is expected to focus increasingly on factory automation and innovation.

Jayant Menon, lead economist for trade and regional cooperation at the Asian Development Bank, said the Philippines, Vietnam and Indonesia, all highly populous countries, might emulate Thailand and concentrate on the automobile industry, with its massive potential for creating jobs. If that is the case, supply chains will likely become even more complicated.

Auto is not the only industry set for major changes. As ASEAN's economic integration continues to deepen, companies of all kinds will find greater opportunities but also new challenges.