SIKAO, Thailand Fisherman Sittichai Bohmung lounges on a remote pier beside a ramshackle waterfront village in this southern Thai district and recalls the time last year when a group of retired generals from Bangkok and businessmen from China came calling.

"I didn't believe it when I heard they wanted to see me," said Sittichai, 48, as the crimson rays of an Andaman Sea sunset silhouetted the bays and inlets he has navigated since childhood. "Someone had told them how well I know this coastline and they hired me to take them out in my boat and be their guide. They even asked for my opinion about their plan."

The plan the generals and businessmen had in mind is one of the most ambitious and transformational infrastructure projects ever contemplated in Asia -- construction of a $28 billion, 135km shipping canal across Thailand's narrow Isthmus of Kra to link the Pacific and Indian oceans.

An Asian equivalent of the Suez or Panama canals, the Kra Canal would slice through the Malay peninsula some 800km south of Bangkok and about 200km north of Thailand's border with Malaysia, linking the Gulf of Thailand and the Andaman Sea at roughly the same latitude as the resort island of Phuket.

The canal would bypass the narrow, piracy-prone and strategically sensitive Strait of Malacca, the world's busiest trade route, which links China, Japan and other East Asian nations with the oil fields of the Middle East and major markets in Europe, Africa and India. The distance saved for ships passing between the Indian and Pacific Oceans would be at least 1,200km, or up to three days' sailing time. Equally significant, it would provide an alternative to a strait through which a record 84,000 vessels passed last year -- a figure that is rapidly approaching capacity. Although Thailand's Prime Minister, Gen. Prayuth Chan-ocha, has said that the Kra Canal is not on his ruling junta's agenda, the Nikkei Asian Review has confirmed that some of the country's most influential figures -- including retired military chiefs, politicians, academics and leading businessmen with close links to China -- are urging him to change his mind. They believe that the canal can be funded in large part through China's multibillion-dollar Belt and Road Initiative and 21st Century Maritime Silk Road infrastructure projects.

A group of retired generals has formed an organization called the Thai Canal Association for Study and Development, which last year worked alongside researchers from Beijing's Peking University and a little-known Chinese company to survey the proposed route. Although not part of China's Belt and Road Initiative, the Chinese company has provided funding for the Kra study, according to Pakdee Tanapura, a Bangkok businessman and long-time campaigner for the canal.

Should Prayuth agree to conduct a feasibility study, experts say a 450-meter-wide, 26-meter-deep canal capable of carrying the world's biggest oil tankers, container ships and bulk carriers could be operational within five years.

Canal supporters intend to argue their case at an international conference in Bangkok in September that will be co-sponsored by King Mongkut's Institute of Technology Ladkrabang, a leading Thai university. Prayuth's economic guru, Deputy Prime Minister Somkid Jatusripitak, has been invited to make the opening speech. 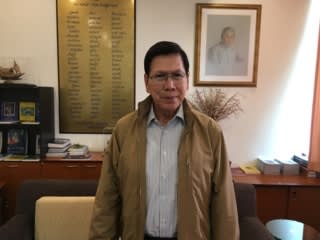 Gen. Pongthep Tesprateep, Chairman of the Thai Canal Association for Study and Development and Secretary-General of the General Prem Tinsulanonda Statesman Foundation (Photo by William Mellor)

ASKING SUPPORT "We hope the people will send a message to the government to pick up this project," Gen. Pongthep Tesprateep, a former army chief of staff who chairs the Thai Canal Association, told the Nikkei Asian Review in an interview. "It is a project that is very good for our country and the whole world, but until now has been left under the table gathering dust."

Since retiring from active military duty in 2005, Pongthep, 72, has served as secretary-general of the General Prem Tinsulanonda Statesman Foundation, a charitable foundation set up by Gen. Prem Tinsulanonda, a former prime minister who presides over the Privy Council, an elite body that advises Thailand's king.

Pongthep, assisted by another retired general, former army Director-General of Civil Affairs Pradit Boonkerd, runs the canal association from the offices of the Prem foundation, although he said he is acting in a personal capacity. "We are retired officers, we have time, we are just like normal people," he said with a self-deprecating smile.

Even so, Pongthep and Pradit's fellow canal advocates include a number of prominent Thai elder statesmen, among them former Prime Minister Thanin Kraivichien, who in 2016 wrote an open letter to Prayuth in support of the canal, former Supreme Commander Gen. Saiyud Kerdphol and Adm. Supakorn Buranadilok, president of the Royal Thai Navy Advisory Group. The Thai-Chinese Culture and Economy Association of Thailand -- a Bangkok-based organization with close links to Beijing and which is headed by former Thai Deputy Prime Minister Bhokin Bhalakula -- is also campaigning for the canal. In recent speeches in China, Bhokin has called for the canal to be considered for inclusion in Beijing's Belt and Road Initiative. He told the Nikkei Asian Review that Chinese officials have expressed support, but are waiting for Thailand to approve the canal formally. "They respect Thai sovereignty and do not want to force Thailand to accept Chinese ideas," he said.

Canal promoters say they do not want China to be the only source of investment, and are trying to convince other countries, such as Japan, South Korea, India and most of Thailand's neighbors in the Association of Southeast Asian Nations, that they would benefit from a canal. The hope is that all these countries, as well as the U.S., will take part in an internationally funded special economic zone centered on the canal.

"If the right interest groups were aligned, could this get done? Of course," said Jonathan Hillman, director of the Reconnecting Asia Project at the Washington-based Center for Strategic and International Studies. "It could be a game-changer in the region, strategically and economically."

According to a Thai-language book published by the canal's promoters, the waterway would cost $28 billion. A surrounding special economic zone would cost another $22 billion, but the combined project would eventually create some 2.5 million jobs, according to the book -- enough to employ one in four of the roughly 10 million inhabitants of southern Thailand. The estuary of the remote Galasai River on the Andaman Sea would become the entrance to the Kra Canal. (Photo by William Mellor)

REVIVING ECONOMY For Thailand, construction of the canal could help revive an anemic economic performance since Prayuth seized power three years ago. Although Thailand is Southeast Asia's second-largest economy, The World Bank estimates that its output will expand by just 3.3% between 2017 and 2019 -- the weakest growth among developing Southeast Asian nations.

By canal supporters' estimates, 30% of shipping from the Strait of Malacca could move north to the Kra Canal. The canal would also attract vessels too big to pass through the strait, which are presently forced to take longer routes to and from East Asia via the Sunda or Lombok straits. Using the Kra Canal instead of the Lombok Strait would save 3,500km and six days' sailing time.

Still, the project faces serious obstacles, including exclusion from Prayuth's list of priorities. "Those who want to initiate the Kra Canal have to push forward the project in the next government," he said last year. "I won't do it now because I have a pile of urgent work to finish." Public support for the canal is also far from unanimous, with proponents and opponents arguing about the security implications of the waterway, which would divide most of the overwhelmingly Buddhist country from three insurgency-plagued and largely Muslim southern provinces. A canal could also fuel tensions within ASEAN because it would bypass and take business from regional shipping hubs such as Singapore. "The challenge is that it would likely benefit Thailand and cut into Singapore's incumbent advantage," CSIS's Hillman said. A lone fisherman holds his meager catch at the beach in Songkhla Province where the Kra Canal would exit into the Gulf of Thailand. (Photo by William Mellor)

Then there are the technical challenges. Although the Isthmus of Kra is just 45km wide at its narrowest point, the proposed route would be three times as long to avoid inland mountains. That would make the canal 58km longer than its counterpart in Panama.

However, the challenges are surmountable, according to Harald Wagner, a former World Bank consultant who has worked on canals in Europe and now teaches civil engineering at King Mongkut's Institute. Unlike the Panama Canal, the Kra route would be at sea level and require no elaborate system of locks. "Technically, it is easy to solve," he said.

The canal's western entrance would be at the estuary of the Galasai River, between Krabi and Trang provinces on Thailand's Andaman Sea coast. The route would bypass the sensitive Thale Noi bird sanctuary wetland before exiting into the Gulf of Thailand on a lonely beach between the cities of Nakhon Si Thammarat and Songkhla.

In mid-June, villagers at Taborn, a district of 8,000 people straddling the canal's proposed eastern exit point, met at their community hall to be blessed by saffron-robed Buddhist monks and to discuss their future. Asked whether they supported the canal's construction, the audience responded with a sea of raised hands.

"The people here aren't worried about the canal being built," district headman Pramot Saengarun, 63, said later, as he squatted under a shade tree. "What they are more worried about is that it won't happen."