TOKYO The Japanese word for music, ongaku, is written with a pair of Chinese characters. The first means "sound," the second, "fun." But there is nothing fun about a raging dispute between the country's dominant music copyright collective and a group of instrument makers and private music schools.

The Japanese Society for Rights of Authors, Composers and Publishers, or Jasrac, sparked the conflict when it announced last year that it would begin charging schools for the use of music under its management. Organizations and companies, including the Yamaha Music Foundation and Kawai Musical Instruments Manufacturing, which run such schools, decided to fight.

They banded together in February to form the Group for Protecting Music Education and filed a lawsuit, arguing Jasrac has no right to collect the fees. Jasrac, which issues licenses and collects royalties on behalf of composers, songwriters and other copyright holders, saw the private music schools as the last educational institutions operating beyond its reach. It already takes fees from dance academies, singing schools and the like.

Nevertheless, Jasrac was met with public outrage, especially on social media. It did not help that the organization already has a reputation for being greedy.

Its 15 offices around the country inform businesses and other parties they are obliged to pay for copyrighted music, then monitors them to ensure they are paying enough. In one instance, a performer of ancient Japanese court music was reportedly asked to pony up.

Jasrac said it merely wanted to ensure the performer was not playing contemporary songs, but that did little to change its reputation for overzealous enforcement.

Another case involved a college entrance ceremony this year in which the president of Kyoto University quoted Bob Dylan's "Blowin' in the Wind" in a speech. When Jasrac spotted a transcript of the speech on the university's website, it asked for compensation.

It eventually retracted the request, but its reputation took yet another hit.

LEGAL COMPLEXITIES Jasrac's track record surely contributed to the indignation over the music school decision, but it was always going to be a tough sell. After all, many schools primarily serve children, and anything that raises the cost of children's education is bound to meet resistance.

At the heart of the matter is the interpretation of "performing rights" under Article 22 of the Copyright Law -- the basis for Jasrac's claim.

Article 22 stipulates that the author of a work has "the exclusive right" to give a stage performance or musical performance of the work with the purpose of having it "seen or heard directly by the public." Jasrac claims students constitute "the public," and that teachers performing protected songs without permission -- in other words, without paying fees -- are violating copyright.

The Group for Protecting Music Education, on the other hand, insists students do not constitute "the public," and that Article 22 only applies to performances meant to convey a work's artistic value. Performances for the purpose of teaching fall outside the law's scope, the group says.

"It's a difficult issue," said Yukihiro Terazawa, partner at the law firm Ito & Mitomi/Morrison & Foerster. "I think Jasrac has the upper hand in its interpretation of 'the public,' as there are similar legal precedents.

"But on the purpose of the performance, there are no such precedents. Normally, Article 22 is thought to be referring to performances at places like concerts. Playing music [at schools] is not done with the intent of amazing someone, and [the group's argument] holds some water."

Disputes are nothing new for Jasrac: Its establishment in 1939 followed a battle earlier that decade between Japanese broadcasters and a German teacher named Wilhelm Plage, who acted as a representative for European collectives in Japan.

Plage went about collecting fees from broadcasters and orchestras that played Western music, but an attempt at a price hike proved a step too far. Japanese users objected that the fees were unreasonably high. National broadcaster NHK refused to pay, and stopped playing Western music for a year.

The German teacher went on to create his own collective, prompting a concerned Japanese government to pass a law giving Jasrac the sole right to serve as intermediary between copyright holders and licensees.

To this day, Jasrac controls about 98% of the music copyright fee business. NexTone, the other company in the business, provides little competition.

"Jasrac didn't build its network [of copyright management and collection] in a day, it was built on its dominance over 60 years or so," said Yuji Arakawa, chief operating officer at NexTone. "It's important [for us] to take away market share, but at the end of the day, we are working for the good of the rights holders. If offering Jasrac competition causes the organization to change for the better, it will benefit the holders."

MORE, NOT MERRIER Yet, in the complex world of copyright management, competition might hinder the development of the music industry. 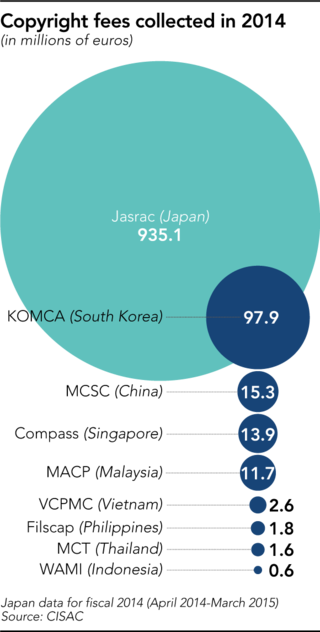 "Asian countries tend to have multiple copyright collectives," said Hideki Nogata, manager of Jasrac's international relations department. "For example, in Thailand, they have nearly 30. When you look at the karaoke shops in Japan, the reason they have so many songs on their list is that there has only been one window for negotiation, Jasrac."

Nogata continued: "When you have a single, reliable copyright collective, new uses for music can be born, but in Asia, it hasn't got to that stage yet." He also noted that it is still common in many Asian countries to buy out the rights to music. Musicians are often pressured to give up their ownership for a lump sum -- taking away their opportunity to earn royalties later on.

All this helps explain the stark differences between Jasrac and its Asian peers: In 2014, the Japanese collective raked in 935 million euros ($1.1 billion at the current exchange rate) in copyright fees, versus 15.3 million euros for China's MCSC, 1.6 million euros for Thailand's MCT and 615,000 euros for Indonesia's WAMI.

Variations in market size aside, Jasrac's figure is a testament to its dedication to the mission of redistributing money to composers and songwriters.

Jasrac believes that adequate returns give creators the incentive to produce more. This cycle of creativity fuels the growth of Japanese music.

"There is nothing but merit" in Jasrac taking care of copyright issues, said Yashikin, a composer at F.M.F. "When I receive statements [from Jasrac], it's kind of surprising to know that I am receiving royalty payments from places I wouldn't have imagined.

"For someone like me, who makes a living as a composer, every little penny counts," he added.

The Group for Protecting Music Education acknowledges Jasrac's position. But Wataru Miki, managing director at the Yamaha Music Foundation and chairman of the group, still prefers a more relaxed approach.

"I think what is happening now is that people are opting against playing music [for fear of being charged]. Jasrac might be getting the money, but I think Japan is headed in the direction of not playing music anymore," Miki said.

The dispute is expected to drag on. In the meantime, it is spurring debate on Japan's copyright rules, which are often criticized as out of date.

"Japan's Copyright Law is based on a 'rules' approach, where there is less room for interpretation by the courts, compared to the law in countries adopting a 'standards approach,' such as U.S. fair-use law," explained Terazawa of Ito & Mitomi/Morrison & Foerster.

"The standards approach identifies principles a court should follow in determining whether a particular use is a fair use, and thus increases the law's flexibility, and gives more discretionary power to the court. This flexibility allows each case to be decided based on its own facts."

Some would like to see the fair-use doctrine, which permits the unlicensed use of copyright-protected works in certain circumstances, adopted in Japan.

"The ... legal battle with Jasrac falls under the jurisdiction of the judiciary," Miki said. "The Agency for Cultural Affairs, the administrative authority, is also handling the music school matter. Fair use is in the realm of legislative authority. All three branches of the government are involved."

Miki sees this convergence as an opportunity.

"If all three powers can face up to the problem of copyright, then I think the Japanese music industry will develop in a positive way. It will also set a good precedent for other Asian countries."