Batchuluun has earned a comfortable living from his herd of over 1,000 cashmere-producing goats in Mongolia’s Gobi Desert. (Photo by Tim Ferry)

NOMGON SOUM, Mongolia In the Mongolian Gobi Desert, Batchuluun's herd of more than 1,000 goats produces valuable cashmere wool that enables him to support a family of five in a traditional ger, or tent. It is equipped with solar panels, a TV and smartphones, and a Kia Frontier truck is parked out front.

But the nomadic herder is most proud that he is passing on this traditional way of life to the next generation. His middle son dropped out of school to return to the ger and take up herding.

"Our herding culture is thousands of years old in Mongolia, and I am very happy that he will continue," he said.

Proud though he is of his traditional lifestyle, it is threatened by its own success. The cashmere trade that underpins the herder economy is leading to widespread pasture degradation and desertification, putting the long-term sustainability of the industry in doubt. Some 70% of Mongolia's pastures, which make up over 70% of the country's landmass, are showing signs of degradation, according to research by the Wildlife Conservation Society Mongolia, while 2% are severely degraded.

"The main reasons for pasture degradation are livestock density per area and too little movement in summer," said botanist Bolor-Erdene Lkhamsuren, a rangeland specialist with WCS. 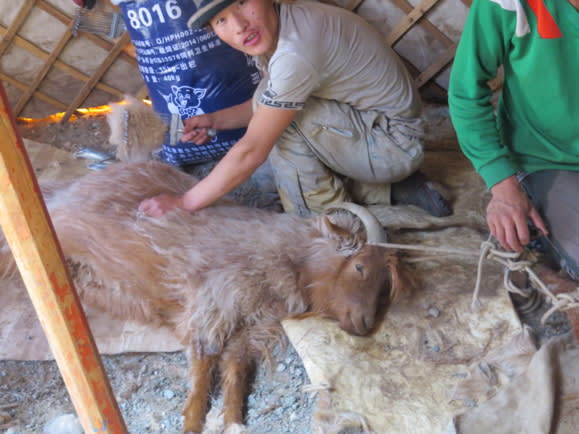 A worker on a farm in Mongolia's Omnogovi Province uses a comb to gather fine cashmere fibers from the hair of a bound goat. (Photo by Tim Ferry)

Mongolia is the world's second-largest producer of raw, or washed, cashmere. Exports of raw and processed cashmere amounted to nearly 9,000 tons in 2015, according to a report by Mongolia International Capital Corp. -- a compound annual growth rate of 36.3% since 2006. Herders generally sell their cashmere to dealers, who this spring paid anywhere from 65,000 to 100,000 tugrik ($26-$41) a kilogram, according to Mongolia's National Statistical Office, depending on the month and region. More than 25.5 million goats are being raised in the country.

Several nongovernmental organizations are involved in educating herders on better pasture management techniques and the value of focusing on product quality rather than quantity.

INCENTIVE TO CHANGE WCS Mongolia recently concluded its second annual direct buy of cashmere at the Nomgon soum (an administrative district) center in Omnogovi Province, in which it offered an incentive payment about 15% above the market price in exchange for a pledge by herders to engage in more sustainable practices. The incentive payment is "to demonstrate the concept that you can get paid more if you make the effort and do certain activities differently," said Onon Bayasgalan, coordinator of the WCS project.

The results of the sale were promising, and in only its second year the program attracted around 100 herders. Many more are looking to join next year.

One of the sustainable practices is adhering to a pasture use agreement, a pact made among groups of herders to prevent overgrazing and degradation. Nearly all of Mongolia's territory is public land, and herders are free to move their camps and herds as they see fit. But herders are also tightly regulated by tradition, with families claiming priority in recognized winter and summer camps. Herders move their herds from two to 20 times a year, depending on the rains and available fodder, and many say they are seeing degradation.

Through an established cooperative in the region, the WCS team helped to organize herders into groups of 10 families to map out their traditional pastures and coordinate more effectively. "Pasture rotation is the main solution," said Onon.

Pasture use agreements are also being deployed by other NGOs, including France's Agronomes et Veterinaires Sans Frontieres and Switzerland's Green Gold, as well as the Sustainable Fiber Alliance, a local community organization set up by Una Jones, a Mongolian who witnessed environmental devastation during the country's transition from socialism to a market economy in the 1990s. But the reach of these groups is limited, and even in regions where they are operating, not every herder will join.

NGOs envision a day when independent auditors will certify herders as engaging in sustainable practices for higher prices, akin to the "Fair Trade" system for coffee and other goods, but this remains years away.

Some herders, including Batchuluun's neighbor, Dalaisaikhan, suggest a tax on herds over a certain size. "If there is a tax on goats over 500 head, that would be good for Mongolia's economic development and would serve to limit herd sizes," Dalaisaikhan said, even though his own herd numbers more than 700 head.

Much of Mongolia's cashmere is exported for use in production overseas, despite ongoing regulatory reforms and investment in the local textile and apparel industries. An estimated 70-90% is sent to textile and garment mills in neighboring Inner Mongolia, a Chinese autonomous region, which receive state subsidies and produce 70% of the world's cashmere garments.

BUILDING VALUE However, recent legislation now prevents raw cashmere from being exported before it has undergone at least minimal processing, helping to build up a larger local processing and manufacturing industry. Several local cashmere apparel makers have achieved sizable international sales of locally produced clothing, including Oyuna, which contracts its designs to local manufacturers, and the Gobi Corp., a vertically integrated Mongolian manufacturer that operates outlets around the world. A worker collects washed cashmere at a cashmere processing factory in Ulaanbaatar.   © Reuters

U.S.-based startup Naadam Cashmere takes a different approach to sustainability by buying directly from herders in Mongolia in exchange for exclusive access to their cashmere. According to Matt Scanlan, chief executive and co-founder of Naadam, "No amount of nonprofit work will replace buying cashmere for business. We want to build a sustainable market."

The value of Mongolian cashmere apparel exports increased to $9.6 million in 2016, according to research by MICC, up nearly 200% since 2009, although still a small slice of the $4.3 billion global cashmere apparel industry as measured by Bain & Co.

Desertification is not the only threat to Mongolian herders' livelihoods. Global climate change has increased the severity of the dzud -- intense cold fronts that kill large numbers of animals. Early snows last winter, following an unusually dry summer, are estimated to have killed up to 6% of the livestock in affected regions. An outbreak of the infectious disease peste des petits ruminants, also known as sheep and goat plague, is also said to have impacted herds.

Jones said the SFA is working on building resilience into herder communities to help them withstand these impacts. "We support herding families and communities in how to identify risks and how they can be managed during difficult winters," she said.

Jones, who founded the SFA after research in Mongolia and Europe on cashmere supply chains, said she aims to bring together herders, manufacturers and environmentalists. "We want to increase the availability of sustainably produced cashmere to the world market that safeguards the livelihood of herding families and promotes high-quality cashmere fiber," she said.