Bank Indonesia tightens its rules as e-money takes off JAKARTA Leading Indonesian e-commerce startups have had to partially suspend e-wallet operations until they are granted a license by the central bank as the growing popularity of e-money services attracts greater regulatory scrutiny.

These include Tokopedia, which recently announced it will raise $1.1 billion from Alibaba Group Holding and other investors; Shopee, a unit of Singapore-based Sea, which recently filed for an initial public offering in New York; and the popular Bukalapak local platform. 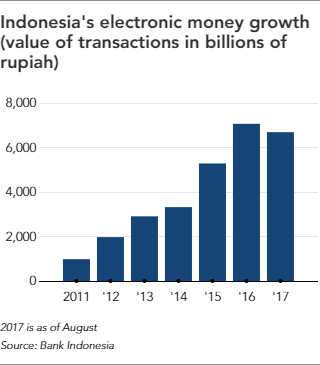 "During assessment of the licensing application, related parties are not allowed to offer top-up facilities for their customers," Pungky Wibowo, the central bank's director for electronification and financial inclusion, told local reporters. He said Bank Indonesia had to ensure "consumer protection."

"We've decided to expand our TokoCash service by submitting the application," William Tanuwijaya, Tokopedia's chief executive, told the Nikkei Asian Review. "We're planning to allow the use of TokoCash outside the Tokopedia platform," he said. Those plans may include fare payment for U.S. ride-hailing app Uber, according to some reports.

Tanuwijaya said TokoCash has received "very positive" responses since its launch in March. People can make purchases and pay bills with it, and bypass more common but lengthier procedures that use ATMs. Credit cards continue to be unpopular with Indonesians.

Bukalapak hopes that once it gains a license its customers will feel comfortable storing up to 10 million rupiah ($742) -- the legal limit -- in their BukaDompet e-wallets. Shopee declined to comment.

Only a tiny fraction of transactions use e-money at present, but the system has seen double-digit growth in the last few years. By August, e-money transactions had already reached 6.6 trillion rupiah -- 94% of 2016's figure, according to Bank Indonesia. Headquarters of Bank Indonesia in Jakarta (Photo by Ken Kobayashi)

Under Bank Indonesia regulations, companies are required to obtain a license when they have 300,000 users, or if the business has turned over more than 1 billion rupiah. But many companies have yet to obtain licenses because the regulatory details are still evolving.

It is unclear when services can restart. A prolonged suspension would hinder the growth of e-commerce companies in a country where less than half of adults have a bank account.

Go-Pay, the e-money service of Indonesia's popular ride-hailing app Go-Jek, launched in April 2016, has supported the company's expansion of its food and grocery delivery services. A Go-Jek spokesperson said the company has already obtained its license.

Bank Indonesia has been updating its regulations on financial technology to catch up with rapid developments in the field. According to its website, 25 e-money issuers have already been licensed.

The suspensions came as a surprise to some because the bank has generally been supportive of e-money as a means of promoting financial inclusion.