Alibaba tops Amazon's market cap as their rivalry heats up

SHANGHAIAlibaba Group Holding, locked in an intensifying battle with Amazon.com of the U.S., is strengthening its runaway lead in China and pushing harder for growth in Southeast Asia, India and other emerging markets.

On Oct. 10, the Chinese online shopping giant briefly topped Amazon in market value for the first time in about 28 months. Alibaba closed the day at $469 billion, only about $5 billion behind its Seattle-based rival, highlighting their close competition.

Alibaba Executive Chairman Jack Ma Yun unveiled on Oct. 11 a three-year, 100 billion yuan ($15.1 billion) plan to build a new research institute called DAMO Academy to study cutting-edge fields such as artificial intelligence and quantum communications. Ma said China has historically followed behind the likes of the U.S. and Russia, but suggested it was time the country blazed its own trail.

Alibaba's American depositary receipts rose to a record-high $184.7 on Oct. 11 after starting the year at just $88.

The e-tailer listed on the New York Stock Exchange in September 2014 to great fanfare with a record-breaking $25 billion IPO. But a year later, it was trading at just half its all-time high. At that point, Ma lamented in an interview with The Nikkei that it was difficult for U.S. investors, who had never used Alibaba's services, to understand the company's true potential. 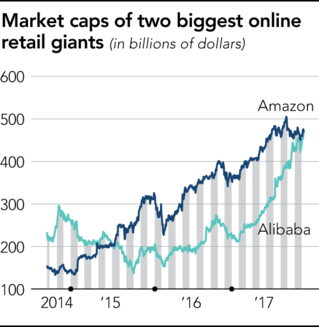 But two years on, Alibaba's ADRs have roughly tripled from those lows, largely thanks to its realization of two strategies: market dominance in China and growth in emerging economies.

TWOFOLD APPROACH At home, Alibaba uses its deep pockets to spend freely on startups in an effort to corner various markets. In July, it joined with other investors to pour $700 million into the bicycle-sharing service Ofo, for instance. It has brought a range of other services into its fold, including video and crowdsourced information sites and ride-hailing apps.

When a steep drop rocked the Shanghai stock market in summer 2015, Alibaba shares were sold heavily amid a wave of pessimism over the health of China's economy. But as those fears retreated, investors warmed to Alibaba, which dominates a Chinese market whose burgeoning middle class is on the way to exceeding the entire U.S. population. That in turn ushered in a rise in the company's ADRs.

China used to account for more than 90% of the e-retailer's sales, stoking investor unease about it depending too heavily on the country. But last year, Alibaba took control of Southeast Asian competitor Lazada Group. It is also working to advance its Alipay mobile payment system in countries such as India and Russia, part of a string of efforts to bolster operations abroad.

Amazon made $136 billion in sales in 2016, while Alibaba's revenue was about $23 billion for the year through March 31. But Alibaba's figure comes from fees such as those levied on sellers using its digital marketplace, so the numbers are not directly comparable.

Emerging economies like India and the countries of Southeast Asia are set to play a decisive role in their competition. While Alibaba and Amazon are running neck and neck in terms of market value, their actual markets are compartmentalized: Amazon largely focuses on developed regions like the U.S., Europe and Japan, while Alibaba is centered on China. But it is a matter of time before they collide head-on in emerging markets.

Their first outright fight for customers is emerging in Singapore. This summer, Amazon opened its first Southeast Asian distribution center there, while Alibaba has been advancing in the city-state through Lazada, which is based there.

In India, Alibaba offers sellers online wholesale services and has invested in local e-commerce enterprises. Amazon broke into the Indian market in 2013 and has been developing consumer-oriented online shopping there, claiming the No. 2 spot. It has also invested in local retail players with brick-and-mortar stores.