Companies cautious of returning despite economic pick up BANGKOK The combined net profit for Thailand's four biggest banks dropped 14% on the year for the July-September period. This marks the second consecutive quarter of declining earnings, despite recent government statistics that have shown promising signs about the country's economic recovery.

Bangkok Bank was the only lender that saw its profit rise, though only marginally, by 1.2% on the year to 8.16 billion baht.

Net profit at state-owned Krung Thai Bank slumped the most, by 32% on the year, mainly because of provisioning expenses. Impairment losses from loans and debt securities jumped 30% from the year-ago period.

During the second quarter ended June, Krung Thai set aside cash to cover all of its loans to Energy Earth, a Bangkok-based coal trader that filed for business rehabilitation with the Central Bankruptcy Court. The bank was Energy Earth's largest creditor, claiming a total of 12 billion baht in principal and interest, according to local media reports.

Pushed by Energy Earth's default, Krung Thai's nonperforming loans as of the end of September totaled 98 billion baht, the highest among the four banks, up 5.4% from a year earlier and a 13.8% increase year to date.

EXPORTS RECOVERY One key indicator of Thailand's recovery is exports, which advanced 12.2% on the year in September to $21.8 billion, marking the seventh straight month of growth. Exports to China gained 12% year on year.

On the back of improving exports, the central bank's monetary policy committee in September raised its gross domestic product growth forecast for 2017 and 2018 to 3.8%, from the previous 3.5% and 3.7%, respectively. 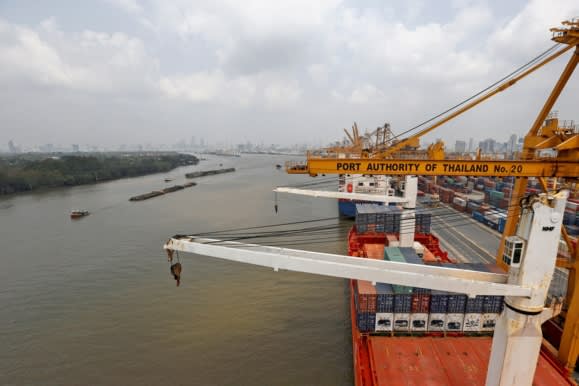 Cargo ships are loaded with containers in Bangkok.   © Reuters

Tanawat Ruenbanterng, a banking analyst at Maybank Kim Eng Securities (Thailand) said banks are waiting for the trickle-down effect to small and midsize enterprises from the larger companies.

"Banks are being very cautious in granting loans, even though they have plenty of liquidity," he said.

It is likely to take some time for Thailand's economy to make a full recovery. The one-year mourning period for the late King Bhumibol Adulyadej will come to an end this month, but that alone will not mean a brighter economy, according to Tanawat. The coronation ceremony of King Maha Vajiralongkorn Bodindradebayavarangkun could perk up the nation's mood, although the date has yet to be specified.

Meanwhile, Prime Minister Prayuth Chan-ocha has hinted that the much-awaited general election could happen in November 2018. "Governments tend to launch large-scale stimulus measures before elections, so we might be able to count on that," Tanawat said.

Shares in Krung Thai Bank and Siam Commercial Bank extended their losses on Oct. 19, while Bangkok Bank and Kasikornbank rebounded, although they could not wipe out the losses incurred over the previous two days.