TOKYO After repeated delays in rolling out Japan's first passenger jet in nearly five decades, Mitsubishi Aircraft now finds itself in danger of losing an order for 40 of the roughly 450 Mitsubishi Regional Jets it has so far agreed to sell.

Mitsubishi Aircraft's latest problem started with a major shift among U.S. regional airlines. In September 2014, the company took orders for 40 MRJs, including options, from Eastern Airlines following the carrier's reappearance in 2009 -- it had been one of the top four carriers in the U.S. before ceasing operations in 1991.

But Eastern ran into trouble again and was acquired in June this year by Swift Air, which announced plans to increase its fleet of Boeing 737 aircraft from 13 to about 18 -- but the new owner failed to mention the previously ordered MRJs.

This caused a major stir at Mitsubishi. "Maintaining the orders will be difficult," an insider familiar with the deal admitted.

Although a Mitsubishi Aircraft representative said the company "can't talk about individual contracts," it is likely that the order, worth nearly 200 billion yen, will be canceled. If so, Mitsubishi would have to shoulder much of the blame, as it has repeatedly failed to meet delivery deadlines, most recently pushing the promised delivery date of 2019 back even further.

Including basic agreements, the company has received orders for 447 aircraft. Mitsubishi's worst nightmare would be if a U.S. airline like SkyWest, which has ordered 200 of the aircraft, also canceled.

CHANGING PRIORITIES Development of the MRJ began in 2008 as the first made-in-Japan passenger aircraft since the YS-11 about forty years ago. ANA was originally scheduled to receive its planes in 2013, but the delivery date has been pushed back five times to 2020. 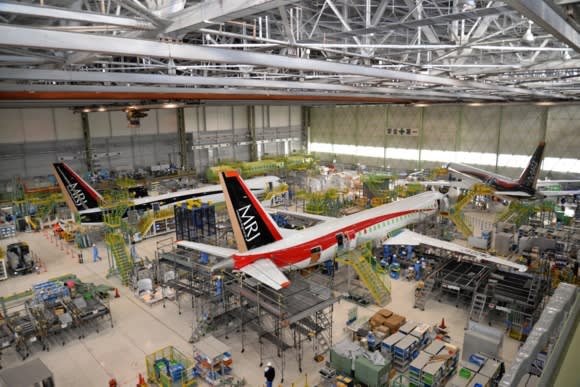 Mitsubishi Aircraft maintains that these delays mainly have to do with obtaining certification from the U.S. Federal Aviation Administration and similar authorities in other nations. But there is a more fundamental issue at play: Airlines are having second thoughts about the MRJ.

Fuel efficiency used to be airlines' top concern. But priorities have changed. "Right now, fuel consumption doesn't matter too much as long as [the aircraft] is not as big as a Boeing 747," said a former maintenance manager at a major airline.

The main attraction of the MRJ in 2008 was its 30% better fuel-efficiency over the competition -- a major advantage when crude oil prices were around $100 per barrel. But with crude now hovering at about $50, airlines are more interested in rollout costs than fuel efficiency.

Brazilian aerospace conglomerate Embraer, which ranks alongside Bombardier of Canada in terms of market share for regional jets with 100 or fewer seats, is adapting to the changing market. To compete with the MRJ, which has 70-90 seats, Embraer plans to introduce a more fuel-efficient E175-E2 in 2021 that uses the same Pratt & Whitney engine as the MRJ.

But for now, the company is pushing sales of its last-generation E-Jet, or E1. "At the moment, there should be no interest at Embraer about rushing the launch of the E2," said an industry source. 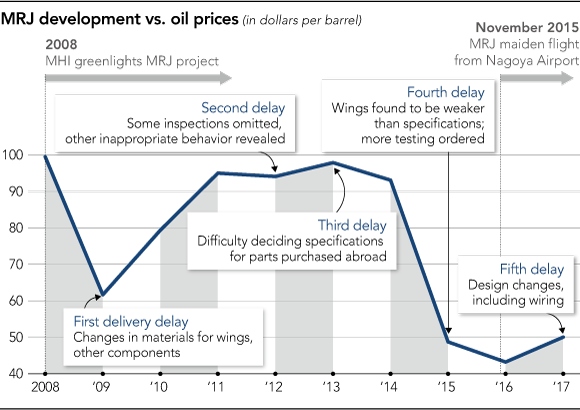 When Mitsubishi announced its fifth delay at the end of 2016, Embraer took advantage of the setback by pushing back the debut of its E2 to 2021. Embraer Civil Aviation Commercial Director Aryen Mayer confirmed that the company has received orders for nearly 300 jets and that development is on-schedule. The delay, he said, is designed to coincide with U.S. deregulation.

The catalog price for the MRJ is 4.7 billion yen, though based on past deals, the actual price will likely be around 3 billion yen.

"Embraer is selling its E-Jet at less than 2.5 billion yen," said a source at a Japanese manufacturer. The implication is that it makes sense for the Brazilian company to continue selling cheaper E-Jets rather than more expensive E2s if airlines are not overly concerned about fuel economy.

REALITY CHECK "Don't worry about getting orders," read a notice sent to Mitsubishi Aircraft sales staff just prior to the Paris Air Show in June, where Boeing and Airbus competed fiercely for customers.

Such confidence was hugely misplaced. Mitsubishi went to Paris with a working MRJ, but returned to Japan with no orders.

It often takes over a decade for new aircraft to become profitable. Mitsubishi Heavy Industries, which produces the MRJ, initially considered sales of 300-500 jets as the break-even point. Now, this will not be enough -- even at preferred prices -- to cover development costs, which observers estimate have ballooned to nearly 500 billion yen, roughly 300 billion yen more than MHI's initial estimate. 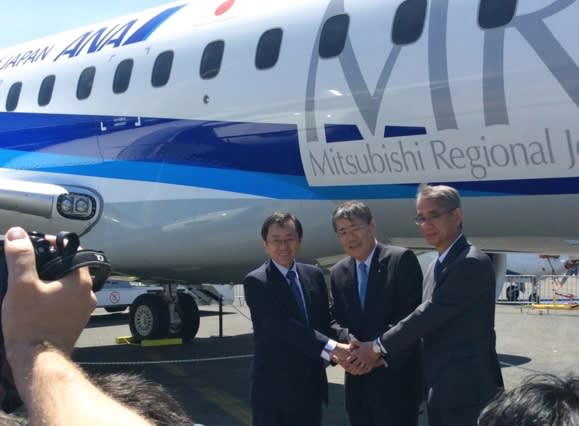 Mitsubishi Heavy Industries President Shunichi Miyanaga, center, went to Paris to debut the MRJ but returned home without obtaining any orders for the new jet. (Photo by Tomohiro Ichihara)

Debt at Mitsubishi Aircraft exceeded assets by 50 billion yen as of March 2017.

POOR CHOICE Development of the MRJ might have gone more smoothly if Mitsubishi Aircraft had made a different decision seven years ago. According to a former MHI employee on the development team, a Boeing executive had proposed using the Boeing 737 cockpit for the MRJ. The employee couldn't believe it when Mitsubishi refused.

The benefit of adopting the cockpit, which is used in the more than 9,000 737s sold as of 2017, would have been tremendous: Costs for training pilots and mechanics would have been significantly lower, and there would have been less reluctance to fly the new aircraft.

But Mitsubishi Aircraft executives brushed aside the proposal. "They insisted on developing everything themselves," the former employee said, still upset by the decision.

In addition to Bombardier and Embraer, China's state-run Comac is rapidly taking off with its ARJ21 jet. Although the aircraft was originally targeted at the domestic market, the company is reportedly partnering with Russia to obtain certification from other countries.

Even if its quality leaves something to be desired, the jet will be a strong competitor if China can bundle sales of the aircraft with economic assistance to developing nations.

MHI still believes it has a great product that will sell regardless of cost. The company has shown a similar confidence before, when it tried to raise prices to cover cost overruns in other troubled projects.

But with its numerous delays, the company now faces the prospect of having to redefine the MRJ in a market that has changed drastically since the jet's original conception. How Mitsubishi responds to this challenge will be crucial to determining the jet's commercial success.