National-level efforts are needed to ensure social stability and vitality Japanese language skills are vital for ensuring that foreign residents are able to integrate into and thrive in Japanese society. Indeed, many people from overseas have difficulty living in Japan precisely because they lack such skills. With Japan's foreign population increasing, overlooking this issue could have grave consequences for society as a whole. That is why Japan must improve its system for helping foreign residents learn the language.

There were 2.38 million foreign nationals living in Japan as of the end of 2016. According to the Ministry of Justice, most were from other Asian nations, such as China, which at roughly 700,000 made up the largest single group, South Korea, the Philippines and Vietnam. The number of foreign nationals attending elementary, middle and high school in Japan and needing help learning Japanese topped 30,000 in 2016, a rise of 27% in four years.

CENTRAL SUPPORT Responsibility for supporting foreign residents' language studies has long been left to local governments, and they have depended on volunteers to do the job. Volunteers are both scarce and aging, however. Public schools have instituted programs to help foreign students learn Japanese, but these are often short of the staff needed to run them.

The Committee for Localities with Concentrated Foreign Populations, made up of cities with relatively large numbers of foreign residents, met last month in the city of Tsu, Mie Prefecture, and demanded that the national government take legal responsibility for supporting Japanese language studies for foreign residents. "Instead of the current policy of having foreign nationals learn Japanese on their own, the government should start building a system that guarantees them the opportunities to learn the Japanese skills they need to live and work in Japan," the committee said.

The government has been slow to act, in part because of the lack of a comprehensive immigration policy, of which support for language study should be an essential part. 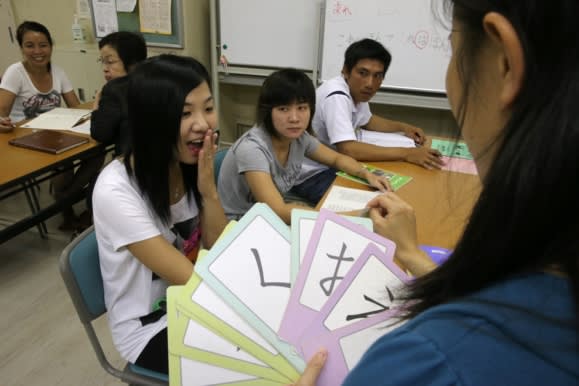 A nonprofit organization in Yokohama holds a Japanese language class for foreigners living in the region. (Photo by Kotaro Igarashi)

For example, the government could offer upgraded residential status for foreign nationals who improve their Japanese skills. Giving foreign children who are expected to stay in Japan permanently the opportunity to master Japanese will help nurture talented people capable of using their language skills to contribute to Japanese society.

Learning from past experiences of immigrants becoming socially isolated due to language barriers, Germany now requires foreign nationals to study German for a certain number of hours if they wish to remain in the country for an extended period. Considering our national budget and available personnel, Japan probably cannot afford to undertake such an extensive program. But admitting foreign immigrants haphazardly without addressing the language issue could invite social disruption. The government should consider language education support for foreign residents from the point of view of long-term social stability and vitality.