Super-charged solutions
The 2017 Nikkei Superior Products and Services Awards honor innovations that are not only hits in their own right, but also blaze trails for the technologies of tomorrow. The winner of the Nikkei Asian Review Award for Excellence is an electric scooter developed by Taiwan's Gogoro.

TAIPEI As the world looks to cut carbon emissions by phasing out internal combustion engines, Taiwan-based Gogoro is doing its part with sleek electric scooters powered by swappable batteries. 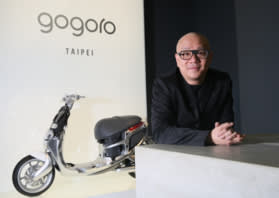 Gogoro co-founder Horace Luke, born in Hong Kong, drew inspiration for his scooters from the streets of Asia, which are often clogged by gasoline-powered motorbikes. He wanted a green-energy alternative, a cleaner future and growth opportunities.

"It's about the pollution issues in Asia, the build and manufacturing economy in Asia and the growth opportunities in Asia," Luke told the Nikkei Asian Review in an interview in late 2015. "These are the three major reasons why we chose Asia as an opportunity for us to get started."

Because of Luke's commitment to clean energy and the product's chic design, Gogoro is often referred to as the "Tesla of scooters." Before Gogoro, Luke was the chief innovation officer at Taiwanese smartphone maker HTC, overseeing product design.

Luke founded his startup in late 2011, soon after he left HTC. He shipped his first scooter in July 2015 and launched a second-generation line last year. Gogoro launched its second-generation product line in 2017. (Courtesy of Gogoro)

Gogoro sources most of its components from Taiwanese suppliers, though its batteries are provided by Tesla supplier Panasonic. The scooters are assembled in Taiwan.

"Taiwan has all the capability," Luke said in the 2015 interview. "We can find all the partners onshore. It's economically a lot better for us because we want to be a lot more agile, we want to move a lot quicker and we want to develop a lot more iteratively."

With Taiwan's government subsidizing electric scooter purchases, the Gogoro 2 can be had for as little as 38,800 New Taiwan dollars ($1,315). So far, Gogoro has sold over 50,000 scooters, most of them in Taiwan. It has also set up more than 500 battery stations on the island.

About 900,000 scooters and motorcycles are sold in Taiwan every year.

Gogoro has expanded into Paris and Berlin by partnering with Coup, a Bosch subsidiary, in a scooter-sharing endeavor. Soon it will roll out a similar service on the southern Japanese island of Ishigaki, Okinawa Prefecture, about 300km from Taiwan. There, it will get help from Japanese conglomerate Sumimoto Corp., also an investor in Gogoro. The partners plan to bring the electric scooter to other areas in Japan this year.

"Southeast Asia will become our next target market as there are many scooter riders in the region," Gogoro Marketing Director Chen Yen-yang said.