It's a mixed bag as prospects look good for 2018, despite December dips The Nikkei ASEAN Manufacturing Purchasing Managers' Index, an indicator of business conditions in the manufacturing sector, slipped to 49.9 in December from 50.8 in November, its first contraction since July. A reading below 50 indicates contraction, and a figure above shows growth. Sluggish figures for the seven Southeast Asian countries surveyed by Nikkei contrasted with others in Asia, including Hong Kong, India, and Taiwan where results hit multi-year highs. "The Nikkei survey data showed that output growth slowed and new orders failed to expand for the first time in five months," said Bernard Aw, principal economist at IHS Markit, which compiled the survey.

Eight of 12 sub-indexes fell below the 50 mark, and employment declined after expanding the previous month. "ASEAN manufacturing sector is likely to have a disappointing start to 2018," Aw said, adding there was also little support from external markets.

In the regional bloc, Singapore saw the sharpest decline, dipping to 44.7 from 47.4 in the previous month. The Nikkei survey showed that export growth there "eased considerably," and purchasing activities fell for the first time in six months.

The indices for Malaysia and Indonesia declined to 49.9 and 49.3, respectively, following expansion in November. Both experienced reduced demand and higher raw material costs with a strengthening U.S. dollar.

Manufacturing continued to expand in the Philippines and Myanmar in December, but at slower rates. 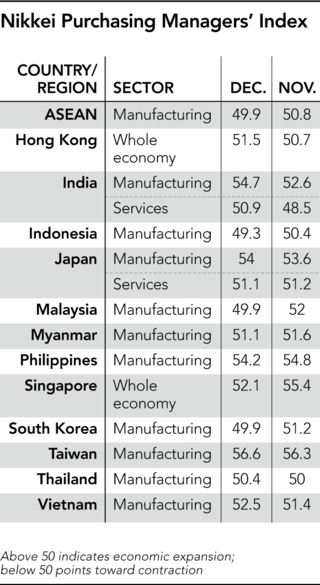 Vietnam emerged as the sole growth engine in the Association of Southeast Asian Nations after a slight slowdown in recent months, hitting 52.5 on the back of a rise in orders. "Overall, 2017 has been a positive year for [Vietnam's manufacturing] sector, with average PMI reading the highest since the survey began in 2011," said Andrew Harker, associate director at IHS Markit.

The dull ending to the year did not dampen optimism among Southeast Asian manufacturers for the future. An index for business confidence over the next 12 months hit a nine-month high in December.

Among other Asia-Pacific countries scoring better, Taiwan achieved its highest PMI in 80 months in December with strong orders from major handset makers. The index rose to 56.6 from 56.3 in November.

India's PMI rose to 54.7 from 52.6 in November, the strongest surge since December 2012 due to a sharp increase in output. However, some analysts believe Asia's third largest economy could face turbulence in 2018 due to delayed payments.

Beyond manufacturing, most businesses in Asia saw a solid end to 2017. The Nikkei Asia Sector PMI, which monitors business conditions in manufacturing, services, retail, construction, and other sectors recorded growth in 15 out of 19 sectors.