The region is predicted to lead global wage growth in 2018

TOKYO Asian workers are expected to enjoy the highest real wage growth in the world in 2018 thanks to solid growth and changes in the region's economic structure, while their counterparts in Japan and the West will see wages stagnate amid budding inflation.

Inflation-adjusted real wages are projected to grow 2.8% in Asia this year, compared with an increase of just 1.5% worldwide, according to a recent annual survey conducted by human resources company Korn Ferry, which tracks 20 million workers at 25,000 corporations.

But Asian workers shouldn't pop open the champagne just yet. The increase represents a slowdown from 4.3% a year ago, as economic growth in the region is expected to ease from last year's strong pace, amid expectations of higher interest rates and slower export growth. Inflation is also returning as a potential drag on consumer purchasing power.

WAGE LEADERS Leading wage growth in Asia are India, Vietnam and Thailand while Japan sits at the bottom of the league.

In India, real wages are expected to grow 4.7%, making the country the best performer for 2018. The South Asian nation continues to recover from major disruptions caused by Prime Minister Narendra Modi's demonetization -- the removal of high-value bank notes from circulation -- in 2016. 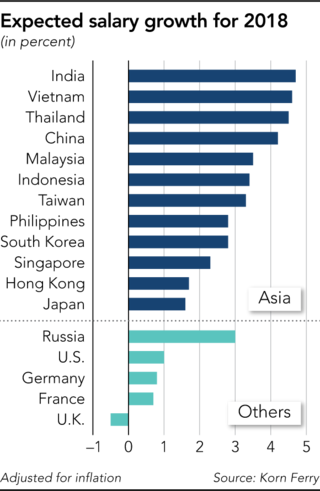 Workers in Vietnam are expected to see similar increases, as private consumption has emerged as an engine of growth along with manufacturing exports, even though concern remains about the country's rising private debt and signs of a property market bubble, HSBC said.

Thai workers are also in for a solid raise as the country continues to benefit from its position as a regional hub of manufacturing amid continuing global growth.

In China, real wages are expected to grow 4.2%, up from last year's 4%. Economists at Moody's Economy.com predict that China will maintain a proactive fiscal policy in 2018 as it pushes ahead with supply-side reforms, such as tackling overcapacity at state-owned enterprises and opening up to greater competition, while also attempting to contain financial-sector risks related to high debt levels.

In Japan, real wage growth is expected to slow to 1.6% from 2.1%. Companies are expected to offer raises of about 2% for the fifth straight year this year, responding to Prime Minister Shinzo Abe's push for higher pay, but budding inflationary pressure is likely to challenge Abe's hopes for faster growth in real terms.

Capital Economics downplays the risk, saying, "Inflation is likely to remain contained." It predicts oil prices will ease, while interest rate rises and slower export growth will put the brakes on the region's growth.

One thing is for sure: Advanced economies will not see wage increases large enough to offset emerging inflation. Korn Ferry projects wage growth of just 0.4% for Australia, 0.8% for Germany and minus 0.5% for the U.K.

There are many factors behind the wage stagnation in advanced economies. The International Monetary Fund cited reduced bargaining power of workers due to increases in nonunionized part-time workers and automation, as well as managers' expectations of low economic growth.