Steve Wynn's downfall could put his Macau casinos in play HONG KONG The future of the Asian gambling business built by U.S. casino tycoon Steve Wynn has been thrown into question after his resignation from management amid allegations of sexual misconduct.

Wynn's reputation for creating themed properties that could draw crowds of families and tourists, dating back to his development of landmark Las Vegas casino hotels such as Bellagio and The Mirage, won the favor of government officials in Macau in 2002 when the city ended its gambling monopoly.

Wynn Macau, also the name of Wynn Resorts' Hong Kong-listed subsidiary, has held its ground against five rival operators. It has a market share of 17%, according to UBS, even though it operates only around 10% of the city's gambling tables. Wynn Macau accounted for nearly two-thirds of Wynn Resorts' $1.06 billion in 2017 operating income.

The Macau concession, however, is set to expire in 2022. While seeking clarity on its renewal, Wynn also has been courting Japanese officials, hoping to win the right to develop a property there as part of the country's opening to casino gambling.

Just days before The Wall Street Journal published an investigative report on a "decades-long pattern of sexual misconduct" by Wynn, he had told analysts he expected Wynn Macau's operating rights would be extended without difficulty. 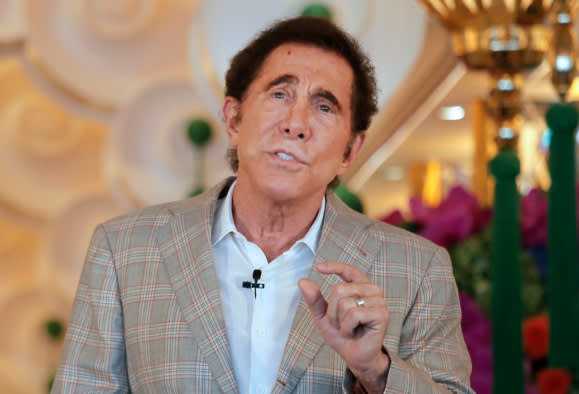 Steve Wynn speaks during a press conference in Macau in 2016.   © Reuters

"We have been given reason to have confidence that our businesses will continue after the initial concession expiration dates," he said on Jan. 22.

In discussing growth plans during the call, he said, "I think we're going to see Japan in the next 12 or 14 months sort of come into season." Wynn Macau's shares closed at a three-and-a-half-year high of HK$30 on Jan. 26.

Regardless of his resignation as chief executive and chairman of both Wynn Resorts and Wynn Macau, Wynn, who has denied the allegations of misconduct, remains a key shareholder, with control over a stake of around 15% in the Asian unit, according to Daiwa Capital Markets.

Hours after his announcement, the Macau government noted in a statement on Feb. 7 that major shareholders of concessionaries, as well as key staff, are "required to meet certain suitability requirements under existing laws" and that local regulators "would strictly monitor and enforce such requirements." It said Wynn Macau had been told to keep officials updated on investigations into Wynn's conduct.

Analysts are divided over the outlook for Wynn Macau. Wynn's resignation announcement "doesn't resolve uncertainty around whether outcomes here [in the U.S.] might potentially affect Macau in any way or increase risk to concession renewal there," wrote USB analyst Robin Farley in a client note.

Some dismiss the idea that the concession could be in jeopardy. "It would be ridiculous for the Macau government to take away the license because of the conduct of one individual," said one Hong Kong-based gaming analyst.

In a research note, however, Jamie Soo and Adrian Chan of Daiwa suggested Wynn could be required to reduce his interest in Wynn Macau, either through selling down his holdings in Wynn Resorts itself or by Wynn Resorts cutting its stake in Wynn Macau.

The Macau government may not be the only force involved. "We believe that the company [Wynn Resorts] is now a breakup/acquisition target," analysts at Nomura said in a report.

They suggested that Wynn Resorts would seek to return value to shareholders by separately selling its U.S. and Asian businesses, with Beijing nudging the company to sell control of Wynn Macau to a Chinese company. "Our view is that a mainland Chinese company would be favored so as to increase Chinese ownership of the valuable asset."

Wynn's hold over Wynn Resorts' stock is also at stake in the courts where years of legal battles continue with two of the company's co-founders: Japanese gambling tycoon Kazuo Okada and Elaine Wynn, the American billionaire's ex-wife.

Okada is seeking to reclaim his stake, which was forcibly redeemed by the company, while Elaine Wynn is trying to get back from Steve Wynn the right to vote her shares.

Amid this uncertainty, analysts have voiced confidence that Wynn Macau's operations will not be disrupted. "The quality of local management ... is outstanding," Nomura's report said. "Mr. Wynn has overseen little day-to-day operating control, so the company's market share should not be impacted." Matt Maddox, president of Wynn Resorts, has succeeded Wynn as chief executive of both the parent company and Wynn Macau. Hong Kong businessman Allan Zeman, a director of Wynn Macau, has become its non-executive chairman.

Yet while Wynn may not have been closely involved in daily operations, he has been at the center of the planning of new properties and of lobbying governments for operating rights.

In his call with analysts on Jan. 22, he said the company had been discussing plans for a second phase of the Wynn Palace with Macau officials and that he had just been conferring with staff that week about the project's design.

"Mr. Wynn's value to the company is unarguably profound as its chief visionary and diplomat," wrote analysts David Katz and Khoa Ngo of Jefferies in a research note. "As such, we do not believe the company can grow at the same trajectory nor can it maintain its cutting edge position."

The opening of casinos still faces considerable public and political opposition in Japan, a factor that may influence licensing decisions. In discussing the market's potential with The Nikkei in a September interview, Wynn said: "The size and the richness of the Japanese market [make it] the perfect [place] in which we can plant our flower."

Implicitly addressing Japanese concerns about legalization, Wynn, who earlier pursued operating rights in Singapore, noted that many places in Asia already have casinos. "If you build a beautiful resort, [visitors] will come to Japan for the resort. And then, if they want to gamble, they will gamble in Japan," he said.