The low-profile Makoto Shinkai is at the forefront of a new wave of anime filmmakers.

TOKYO At a special Christmas showing of "Your Name" held in Shinjuku on Dec. 23, fans of Makoto Shinkai's blockbuster anime were encouraged to celebrate the film by cheering, crying and singing together -- and many did all three at once.

The girls came dressed as Mitsuha, the high school heroine, and the boys as Taki, the handsome Tokyo teenager, who mysteriously switch bodies and then try to find each other.

"How many of you have watched the movie three times?" the event host asked the 350 fans. Almost all hands went up. "Five times?" Half the audience kept their hands up. "Don't tell me ... 10 times?" she asked. Fans of Makoto Shinkai's "Your Name" pack an auditorium in Tokyo's Shinjuku district for a special Dec. 23 showing. (Photo by Ken Moriyasu)

More than 20 people, young and old, male and female, kept their hands up, watching raptly as Shinkai appeared on stage.

The film, a visually stunning animation with an emotional story line, has captivated not only Japan, but also the rest of Asia. "Your Name" has topped the box office in Japan, China, Taiwan, Hong Kong and Thailand. As of mid-December, ticket sales in Japan alone came to 21 billion yen ($179 million), making it the second-highest grossing film of all time after anime master Hayao Miyazaki's "Spirited Away," which raked in $262 million in 2001. "Your Name" also earned $79 million in mainland China in the first 19 days.

One of the most striking features of the movie is its dazzlingly detailed background scenery, a hallmark of the 43-year-old filmmaker known as "Shinkai magic." For an opening scene that lasts barely two seconds, Shinkai and his team produced a photo-realistic portrait of Tokyo's Shinjuku district, hand-drawing thousands of buildings and countless windows. This stunning, hand-drawn view of Tokyo's Shinjuku district appears in the opening scene of "Your Name." (Courtesy of Toho)   © 2016 YNFP

QUEST FOR PERFECTION In anime production, the scenery and characters are often drawn separately. Only later in the process are the components combined. Many directors leave this labor to staff. Shinkai happily does it himself, considering it a crucial step in achieving perfection.

The journey of Mitsuha and Taki, as they journey across time and space to find each other, was inspired by a classic 10th-century poem. The "out-of-body" experiences in the film are also drawn from ancient Japanese literature.

Shinkai was born in Nagano Prefecture, north of Tokyo, where his family runs a 107-year-old construction company. After he graduated from Chuo University in Tokyo, his father had arranged for him to work at a housing manufacturer to learn how to run the family business. But Shinkai instead chose to join a game development company, Nihon Falcom. As he learned to create graphics, Shinkai began nurturing a desire to shoot his own films. After a long day at the office, Shinkai would work on his own animation projects until 3 a.m., snatching just a few hours of sleep before heading off to work again. 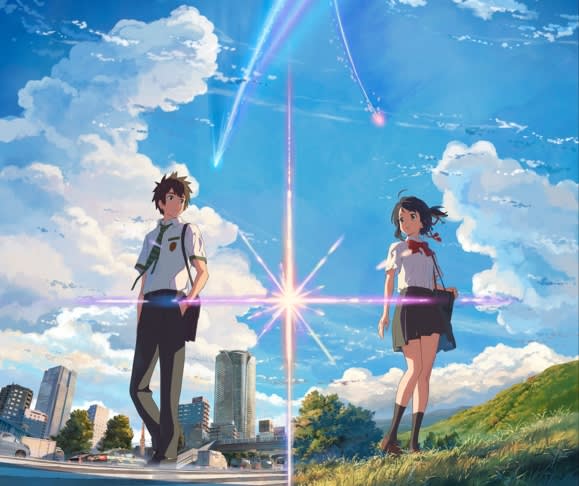 A still from "Your Name" featuring lead characters Taki, left, and Mitsuha   © 2016 YNFP

When he was 27, Shinkai single-handedly created a five-minute animation, "She and Her Cat." The midnight work paid off. He won an award, which gave him the confidence to quit his day job and focus on anime full time. In 2002, he made his commercial debut with "Voices of a Distant Star."

BREAKOUT SUCCESS Until "Your Name," however, none of Shinkai's films had grossed more than 200 million yen. The story of Mitsuha and Taki has propelled him into the stratosphere. Set to show in 92 countries and territories, the film has drawn almost universal critical acclaim, with some critics talking of a possible Oscar award.

"At 107 minutes, I think the movie is a bit too long," Shinkai -- ever the perfectionist -- told the Nikkei Asian Review. "The shorter the better, even by one minute." The bespectacled director says his goal is to provide engrossing entertainment. "I don't want people to look at their watches during this film," he said. He does not consider himself an "artist" by his definition ("those happy with their art regardless of the reception"), but rather a commercial anime director, constantly conscious of the audience.

"Your Name" is a refreshing entry in the animated genre, which has been struggling to find new story ideas lately.

At the Christmas event, Shinkai was asked how he felt about his box office success. "I thought that movies that bring in $80 million or $100 million were for Pixar, Disney and Studio Ghibli," he said, the last referring to Miyazaki's animation company. Shinkai said he began drawing cartoons after being struck by the beauty of a Miyazaki film while in elementary school, adding that nobody has influenced him more than the anime master. Yet he insists that he is nowhere near Miyazaki's league. The phenomenal success of "Your Name" will no doubt provide inspiration for his next project, a boy-meets-girl romance he hopes to finish within three years.

"I'd always thought [that kind of success] belonged to a different world, but now that we've topped $100 million, I think we can do it again," he said. "And I hope this will encourage many other directors to do the same."