TOKYO Myanmar is projected to post the fastest growth of any emerging Asian economy in 2017. Yet in many respects, its consumer market is still underdeveloped. This presents a golden chance for the country's largest retailer to extend its reach, according to the company's top executive.

"If we look at the distribution of basic commodities, such as soap and detergent, the distribution may be 100%," Win Win Tint, managing director of City Mart Holding, said in an interview in Tokyo in late November. "But for more advanced products like [fabric] softener and [hair] conditioner, distribution is limited to big cities -- maybe only 20% of the country. There is so much opportunity to grow."

City Mart is one of the few modern retailers in Myanmar, where small, traditional shops remain the norm. It runs some 40 supermarkets, as well as convenience stores, bookstores and other shops. Win Win Tint, who was in Japan to attend the Myanmar Economic Seminar organized by Nikkei, said the company's annual revenue comes to about $250 million.

On the subject of Myanmar's consumption outlook, she added: "We are starting from a low base. There is demand for all kinds of products all over the country." 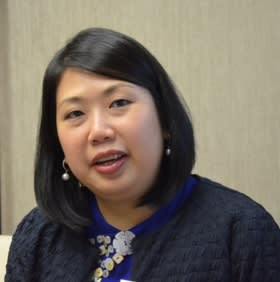 In the last five years, she said, lifestyles have been evolving and traffic congestion has increased. The result, Win Win Tint said, is a growing tendency to look for "the convenience factor" when making purchases.

Myanmar's income gap is widening, she said, but less-affluent people are also increasingly determined to catch up with the changes.

PRICEY PROPERTY Myanmar's per capita gross domestic product was about $1,200 in 2015, according to the World Bank -- a very low level by Asian standards. However, the Asian Development Bank predicts the nation's economy will grow 8.3% next year, outperforming the rest of the region. The ADB also forecasts 8.5% inflation for Myanmar in 2017.

Although high inflation is a short-term challenge, Win Win Tint said, the strong growth outlook means retailers have a lot of room to expand in the long run. City Mart, she said, plans to double its supermarket network by 2020 and also aims to get into e-commerce.

Her company is likely to fund its expansion with self-financing and by borrowing from local banks. Asked whether the company wants to list on the Yangon Stock Exchange, which opened for trading in March, she said, "Definitely yes, but not in the short term."

She has her reasons: "The liquidity of the market is very limited because the government still does not allow foreign companies to invest in the stock exchange," she said. "It is not attractive for companies that want to raise capital in Myanmar. Also the market is still volatile in nature and speculative. Investors focus on making short-term profit."

A more immediate challenge for retailers like City Mart, she said, is the high price of real estate in Myanmar.

"There are difficulties in finding sites to develop or convert into shops, because the cost is very high. It is almost not realistic to do any business," Win Win Tint said, attributing the problem to a lack of alternative investment opportunities in the country.

Besides its ascendant economy, Myanmar is also drawing international scrutiny over its treatment of Rohingya Muslims, a long-persecuted minority. But Win Win Tint said this is unlikely to affect City Mart or hinder cooperation with foreign partners. "Definitely there will be an impact on the country, [through] the economy, but [for now] we stay very much in big cities," she said. "I don't think that issue directly has an impact on our kind of business."