Attacks on the mind and a looming crisis

The administration of Taiwan's President Tsai Ing-wen is wary of a Chinese attack launched from the nearby provinces of Fujian and Guangdong. This September photo shows piles to prevent Chinese ships from landing on the island of Kinmen, just off the mainland.

With the Chinese Communist Party's 20th National Congress now finished, President Xi Jinping is closer than ever to becoming a leader on a par with founding father Mao Zedong. His third term as party leader will be the final stage of the "Great China" project, an initiative fraught with contradictions. This series will examine the next five years by unpacking China's perspective and logic.

On one western Taiwan island, residents hold an affection for China. Its name is Kinmen.

"We are all Chinese too. We have nothing but good impressions of China."

During a visit in early September to Kinmen, residents were unanimous. One of the islanders, 60-year-old Zhou Fu-guo, said: "The administration of [President] Tsai Ing-wen is too biased toward the U.S. Xi Jinping-led Taiwan unification will come naturally if they [Beijing] don't rely on force."

Kinmen is only 2 kilometers away from mainland China. In 1949, after losing to the Communist Party, the Kuomintang (KMT) fled to Taiwan, aiming to retake mainland China from Kinmen.

The KMT garrison peaked at 100,000 troops. In 1958, a fierce battle took place, known as the Second Taiwan Strait Crisis or the August 23 Artillery Battle. More than 470,000 artillery shells rained down from China, but Kinmen survived.

It was the front line of Taiwan's defense, but that tension has now completely vanished.

On the other side of the water stand the skyscrapers of Xiamen in Fujian province. Many of the islanders have been attracted to China's rapid growth and have purchased some 20,000 condominiums in Xiamen. Not a single seat in the island's local legislature is held by the ruling Democratic Progressive Party (DPP), led by Tsai.

"We will firmly oppose and suppress Taiwanese independence." The Xi administration revised the Communist Party's constitution to make the unification of Taiwan the most important objective of his third term.

In China, where the party leads the government, such "pledges" carry more weight than the country's constitution. If the Taiwan situation turns into a conflict, things will happen quickly. A Chinese proverb derived from the Records of the Three Kingdoms and other sources comes to mind: "Speed is precious in warfare." This phrase is coming into widespread use in Taiwan.

The decision to take a more hard-line tone on reunification was not made lightly.

"Those KMT soldiers across the sea may still be watching me closely with binoculars."

In 1985, a man joked this way as he visited the beaches of the village of Hecuo in Xiamen, which overlooks Kinmen. The area was the scene of fierce battles during the Chinese civil war. The man was none other than Xi, who had been appointed deputy mayor of Xiamen at the age of 32.

At the time, Xiamen had just been designated as one of China's first special economic zones, along with Shenzhen in Guangdong province. The previous year, Deng Xiaoping, who promoted the policy of reform and opening up, also visited the site. The city was also a key location for the political goal of unification, serving as a front-line base.

Xi sought reconciliation with Taiwan after he took up his post. His role model was his father, Xi Zhongxun.

Persecuted during the Cultural Revolution, the elder Xi endured 16 years of humiliating detention until 1978. After returning to the good graces of the party, he worked on the economic development of Guangdong. He led a project for a special economic zone in Shenzhen and focused on bringing in capital from Hong Kong and Taiwan.

Using his success in Guangdong as a foothold, he paved the way for a full-fledged return to the center of the political world. These hardships were witnessed firsthand by the younger Xi and were his formative experience of politics.

Wu Chia-ying, the 62-year-old head of the Taiwanese Chamber of Commerce in Xiamen, knows Xi well. "The young Mr. Xi talked a lot with our Taiwanese business owners and worked hard to win them over," he recalled.

Following in his father's footsteps, Xi worked hard to bring Taiwanese capital into Fujian. "He has been in contact with many Taiwanese people and knows Taiwan very well," said Wu, who entered the construction stone business from Taiwan in the 1990s.

Xi's tenure in Fujian lasted 17 years. Although relations between China and Taiwan were repeatedly strained, including during the Taiwan Strait crisis in 1995, he went around promising Taiwanese executives, "No matter what happens, we will protect everyone's interests." Currently, one-third of Xiamen's industrial output comes from Taiwanese companies.

For China, nothing would be better than bringing in Taiwan without a fight. However, there is no guarantee that will happen successfully, considering the growing caution toward China in Taiwan. It has been 37 years since Xi arrived in Fujian. Preparations by China are steadily progressing.

Xiamen's port, Aug. 31, 12:07 a.m. The large Chinese civilian ferry Bohai Hengtong began to rock as it set out into the night sea.

It was headed for Yantai in Shandong province, 1,500 km to the northeast, according to the ship's identification signal – but in reality, it was heading in the exact opposite direction. Sixteen hours later, it slowed down at the Gulei Peninsula in the Taiwan Strait.

A high-definition satellite photo shows the moment the Bohai Hengtong opened its stern ramp at sea. Eight amphibious vehicles were lined up behind it. "From the imagery, it looked like the amphibious assault vehicles were going back and forth to the beach, presumably to practice loading and off-loading from the ferries that were involved," noted Thomas Shugart of the Center for a New American Security.

Like the anti-corruption campaign that Xi has used to consolidate power, he will be relentless if he makes a move. On April 16, Xi stressed, "We will never commit to renouncing the use of force. Now, as an extrajudicial measure, all civilian goods and infrastructure can be turned into pawns at the will of the leadership."

Tsun-yen Wang, an associate research fellow at the Institute for National Defense and Security Research (INDSR), a think tank affiliated with the Taiwanese Defense Ministry, is increasingly vigilant about China.

"There are tens of thousands of Chinese tactics, but the ones I am most aware of are 'speed is precious in warfare' and 'Electronic Warfare'," he said. He expects that China will try to mobilize civilian resources and to bring down Taipei in one fell swoop.

Xi's third term will last until 2027. That year will mark the 100th anniversary of the founding of the People's Liberation Army, and is also the year that the U.S. military sees as the point when China will acquire the potential to invade Taiwan.

The situation is more urgent than many think. For China, the more time passes, the better-equipped Taiwan and the U.S. military will be. Its "attack on the mind," including cyberwarfare and the manipulation of public opinion, has begun. Nevertheless, there is still a risk that "speed is precious in warfare" will become a reality under the pretext that opponents of independence are being persecuted in Taiwan.

"Beijing was determined to pursue reunification on a much faster timeline," said U.S. Secretary of State Antony Blinken on Oct. 17. U.S. defense companies are seeing their arms inventories drop low because of the country's support for Ukraine. The U.S. is considering joint arms production with Taiwan, but it will not be easy to produce enough to meet the threat in time.

A Taiwan tipping point is fast approaching. Neither the U.S. nor China can hide their impatience as the day approaches. The bottom line is that Taiwan is not a monolith. Will a clash between Washington and Beijing become inevitable? Would China win without a fight? The world will soon be at an unprecedented crossroads.

China has recently conducted large-scale military-civilian exercises, with an eye toward possible aggression against Taiwan.

China has reshuffled its leadership under President Xi Jinping, who has cemented his power base, and can now mobilize 1.4 billion people in the name of "national defense." Preparatory drills involving civilians have started in Fujian and Guangdong provinces, which directly face the island across the Taiwan Strait.

A large Chinese commercial ferry, the Bohai Hengtong, left the port of Xiamen in Fujian on Aug. 31, supposedly heading northeast, but appeared to the south off the Gulei Peninsula late that afternoon. The sandy shore has no ports that can accommodate big ships.

Nikkei tracked China's recent military drills around Taiwan, analyzing data from the Automatic Identification System (AIS) of MarineTraffic, which provides information on ship movements, along with satellite photos provided by Maxar Technologies of the U.S. The analysis was conducted together with military and other experts.

With a gross tonnage of 24,777 tonnes, the Bohai Hengtong is one of the biggest ferries in Asia. The ship was met by dozens of amphibious armored vehicles. This indicates that China plans to deploy civilian ships along with military vessels in any attack on Taiwan.

The operator of the ferry did not respond to Nikkei's requests for comment.

China is stationing vast quantities of weapons opposite Taiwan as quickly as possible to enable a sudden strike against Taiwan, said the INDSR's Wang. If China took a long time in capturing remote islands controlled by Taiwan and laying siege to the main island, the U.S. and others might come to Taiwan's aid, thwarting a Chinese takeover.

The biggest obstacles to any Chinese aggression against Taiwan are the Taiwan Strait and the U.S. military, the world's strongest. "An attack will require the dispatch of 200,000 to 300,000 troops, far beyond the transport capacity of the People's Liberation Army alone," said Bonji Ohara, a senior fellow at the Sasakawa Peace Foundation.

To meet this challenge, China has sharply increased the scope and frequency of its drills. The civilian shipping industry is not the only one being pressed into service.

Voices at a secret military-related conference held in Guangdong province were streamed on a video-sharing site in May, proposing to recruit workers from Huawei Technologies and Tencent Holdings, among others, to make up for a personnel shortage in the military's cyberwarfare unit.

The voices also mentioned a plan to encourage big technology companies and specialized drone manufacturers to make unmanned aerial vehicles for military use. The recording may have been deliberately leaked to threaten Taiwan. A top-secret military drill envisioning the mobilization of citizens and civilian supplies was carried out in Guangdong in May, according to people involved.

Russia offers an instructive example of how not to conduct an invasion. Its forces have been bogged down since their attack on Ukraine began in February and it has obviously made mistakes, INDSR's Wang said.

Russian President Vladimir Putin, the country's autocratic ruler, has seen his position weaken as a result of his ill-conceived gamble. China's leaders would not want to make the same mistake. They are working flat out to make the military nimbler, believing speed would maximize their chances of winning a war over Taiwan.

The U.S., meanwhile, is responding to what it sees as a growing strategic threat from China. In his National Security Strategy announced on Oct. 12, President Joe Biden stressed a policy of confronting China, saying, "Beijing has ambitions … to become the world's leading power." The clock appears to be ticking toward a showdown.

The atmosphere is changing in China as well. 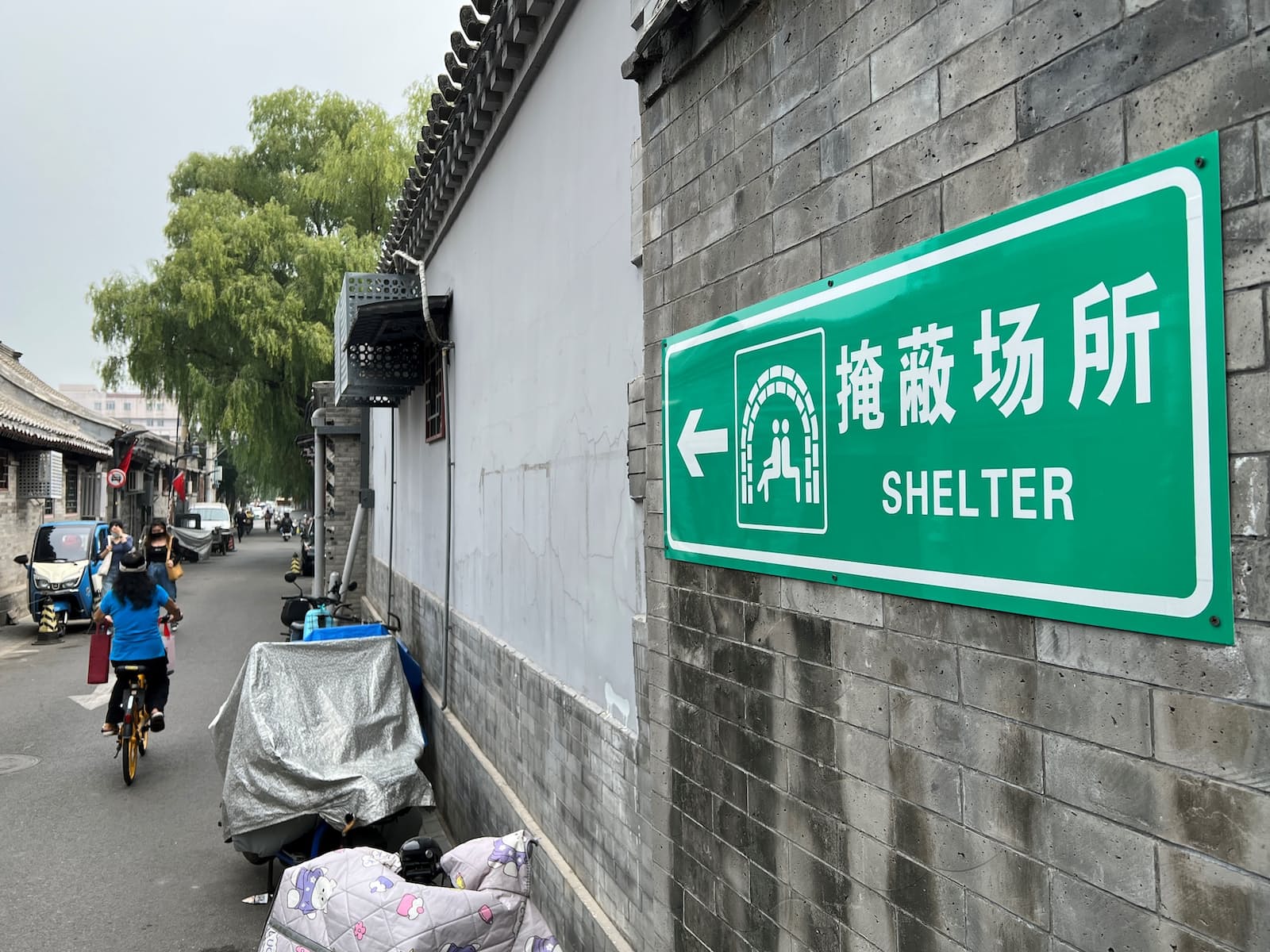 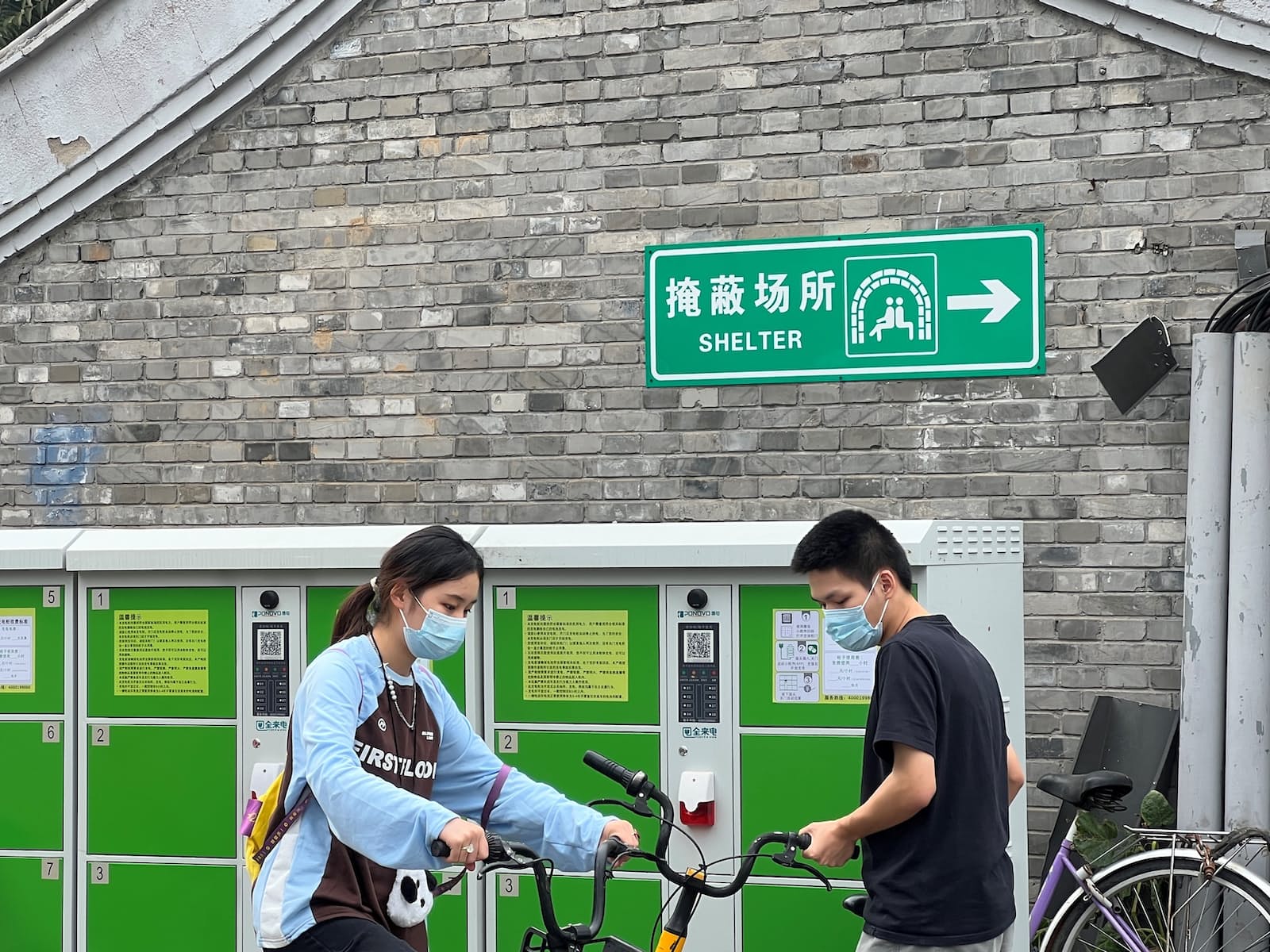 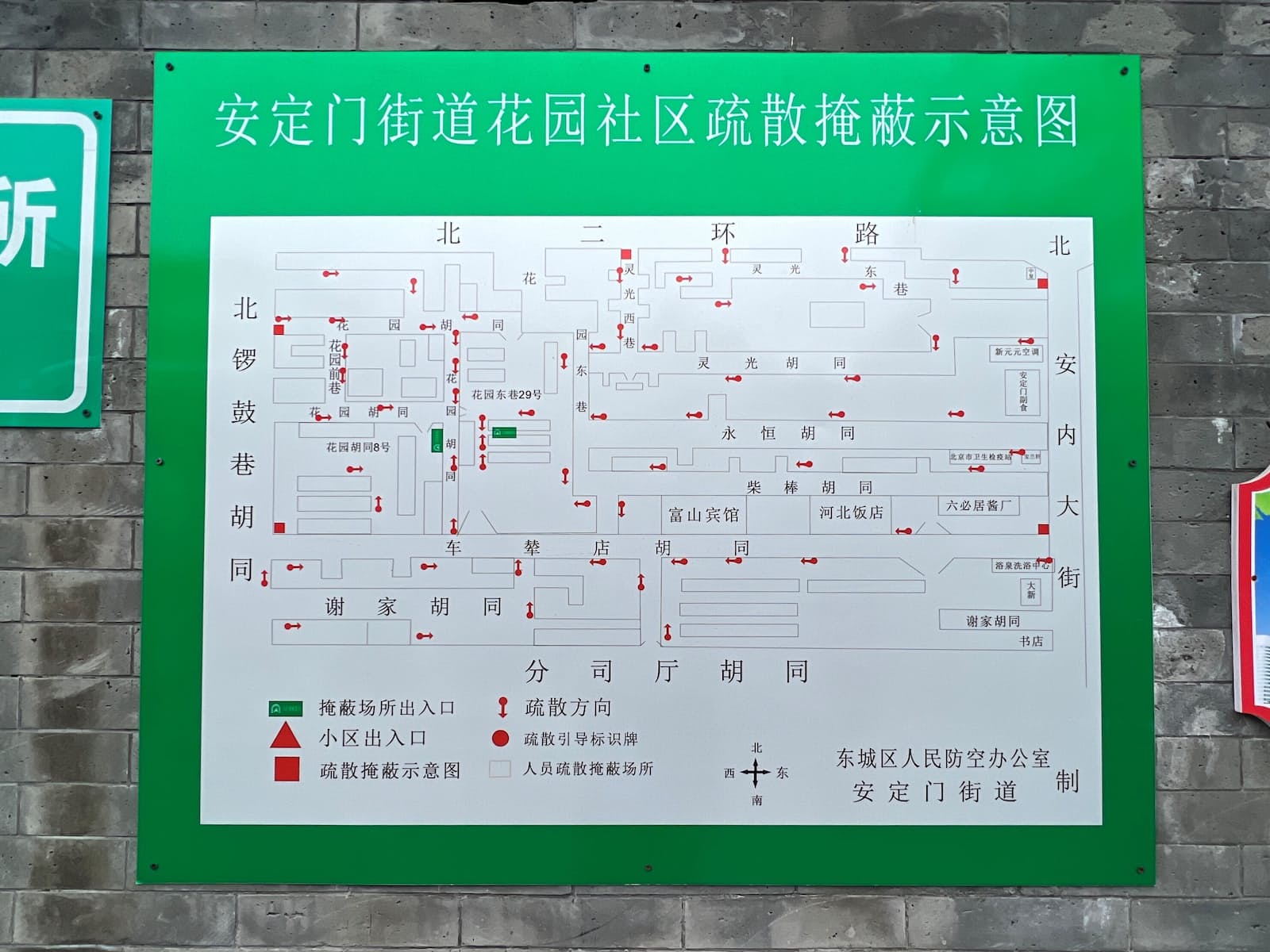 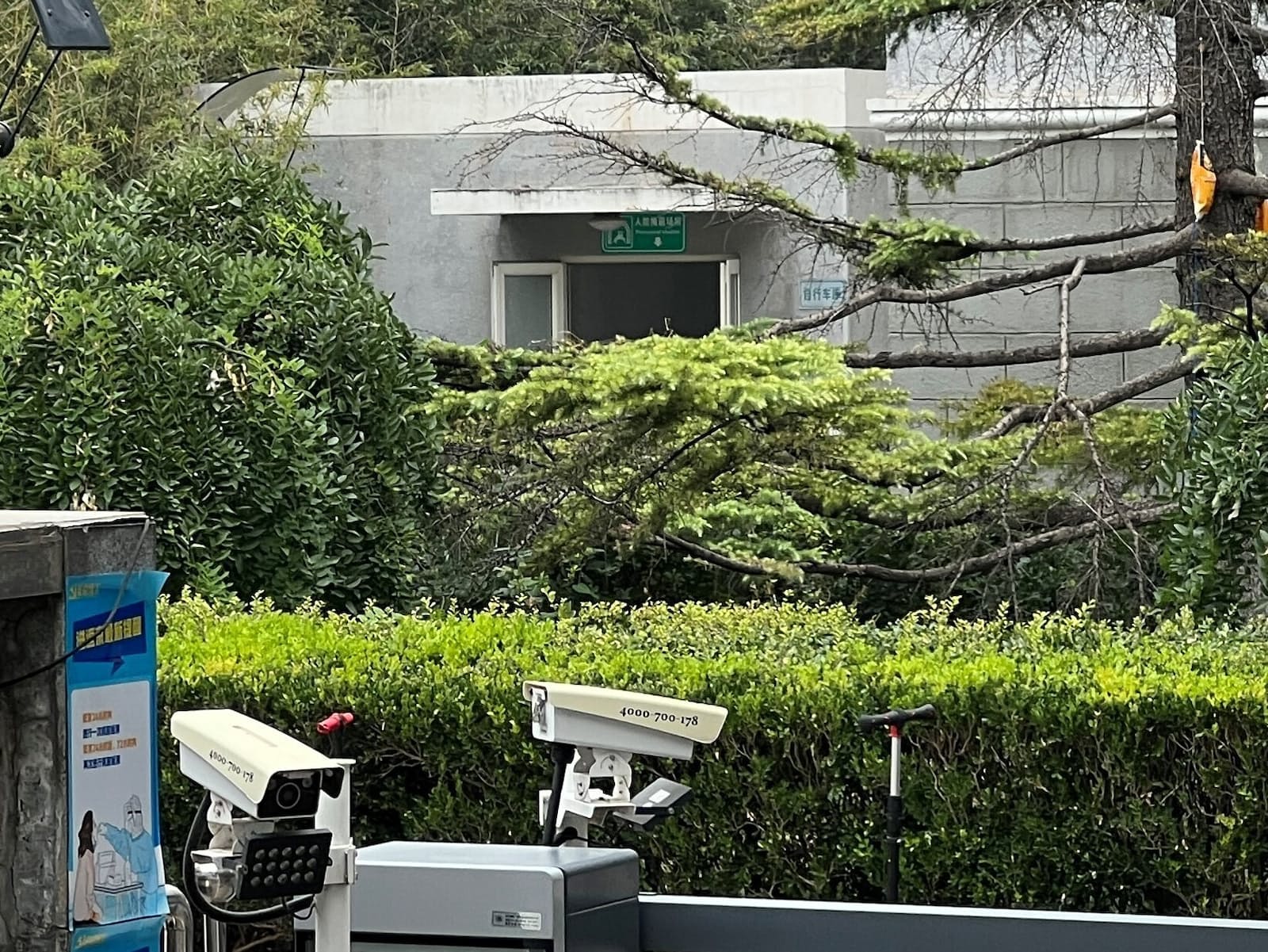 Signs reading "Shelters here" began appearing in Beijing in early October, before the start of the 20th National Congress of the Chinese Communist Party. "Preparations for U.S. attacks are underway in earnest at last," said a resident in a densely populated area of downtown Beijing.

Back to Nikkei Asia

Nikkei Inc.
No reproduction without permission.