Hello, this is Cissy in Hong Kong, writing the #techAsia newsletter for the first time. I cover Chinese business news, with a focus on tech companies.

The city where I have lived and worked for five years has undergone significant changes since Beijing introduced a national security law here. This week, thousands of residents carrying bouquets of flowers in the unseasonable September heat queued for several hours outside the British consulate to mourn the late Queen Elizabeth II, a gesture seen by some as a tacit rebuke of Beijing's squeeze on freedom in the city.

Tensions between the U.S. and China have also increased markedly in that time. As I draft this newsletter, I am anxiously checking whether U.S. inspectors have arrived in Hong Kong. They are due to conduct onsite inspections of mainland China firms listed in the U.S. "by mid-September," according to the American side, but so far there is no sign of them.

The two countries agreed last month that U.S. inspectors would be allowed to inspect these companies' books, potentially defusing a threat to delist them from American markets. But experts have warned that China may set barriers in the auditing process, while the U.S. could still force companies to delist if it is not happy with the results of the inspections.

Tensions are escalating in other ways, too. To curb Chinese technological and military advancements, Washington is further restricting shipments to China of high-end graphics processors and AI accelerators used in super computer development, and it is reportedly preparing to broaden curbs on chip exports to China next month.

While the global chip shortage has started to ease a bit, leading chipmakers remain locked in a fierce battle to deliver ever-more-advanced production technology. Both TSMC and Samsung hope to be the first to put 3-nanometer tech into mass production this year, but it seems that Apple is sticking with its Taiwanese partner for now.

The U.S. tech giant is aiming to be the first company to use N3E, the updated version of TSMC's latest 3-nanometer chipmaking technology, for its A17 chip in the premium iPhone lineup next year, Nikkei Asia's Cheng Ting-Fang writes. Apple also intends to use N3E for its next generation of M3 chips for Mac computers.

Apple is TSMC's largest and most loyal partner in terms of chip technology adoption. Previously, Intel had planned to reserve 3-nm production from TSMC by late 2022 or early 2023, to be among the first wave of adopters like Apple, but orders have subsequently been delayed until at least 2024, Nikkei has learned.

The "Chip 4" initiative is supposed to comprise the U.S., South Korea, Japan and Taiwan, offering a forum for governments and companies to discuss and coordinate policies on supply chain security, workforce development, R&D and subsidies.

But a year after the proposal was drawn up, the four countries have yet to finalize plans even for a preliminary meeting. Concerns among the Asian members include China's likely response, hesitation over including Taiwan in an intergovernmental forum, and longstanding tensions between South Korea and Japan.

The U.S. is pitching the initiative as a positive, multilateral agenda quite separate from the export controls and investment screening it has imposed to make it harder for China to obtain advanced semiconductor technology.

But Chinese opposition has unnerved regional governments and chipmakers. China accounts for 40% of global IT production and remains a crucial source of key components and materials.

Nazak Nikakhtar, a former senior U.S. economic security official, said the slow progress of the initiative demonstrated that "a multilateral approach only works if everybody has the same desire to move at the exact same time." 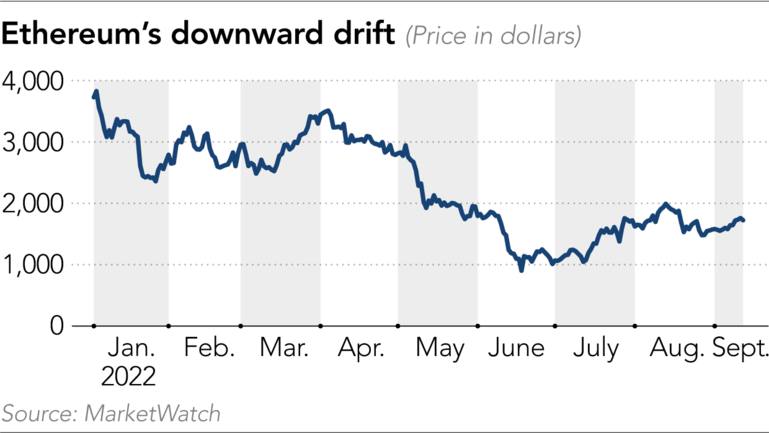 Ask cryptocurrency enthusiasts, and they will tell you digital currencies will revolutionize the financial system. But ask a crypto skeptic, and he or she may well point to their massive carbon footprint as a big threat to our planet.

Ethereum, the blockchain technology behind the ether digital coin, is transitioning to an alternative computing method for creating new coins and logging transactions that developers and supporters say will slash energy use by over 99% compared with conventional cryptocurrency models like those used by Bitcoin, writes Nikkei Asia's Francesca Regalado.

The price of ether began to rise in July when the Ethereum Foundation announced a date range for the "merge," as the shift is called. The price peaked in mid-August but has fallen 11% in the past month as big coin holders readied to sell, raising concerns of dumping in case the merge fails to go as planned.

After beating Tesla and other competitors in market share for EVs and other new energy vehicles in its home market, China's BYD has set itself a new challenge: conquering the auto kingdom of Japan.

The Japanese market has long been regarded as difficult to crack because of the dominance of local brands like Toyota, Honda and Nissan. But Japan's shift to EVs has been very slow, with few electric models available. And this is where BYD sees an opening.

From January, BYD will start selling three EV models in Japan. Launching new models in rapid succession into a highly competitive car segment is an unusual approach for a foreign manufacturer, as they tend to carefully assess customer response to one release at a time, Nikkei Asia's Shoichiro Taguchi writes.

"We sometimes say it's like there's no competitors in Japan," BYD Japan President Liu Xueliang recently told Nikkei Asia, referring to the lack of a domestic EV industry. But the Japanese government has set a goal of allowing only electrified new cars to be sold by 2035, meaning BYD may not have the road to itself for much longer.