Hello, this is Akito Tanaka from Singapore. Here, various COVID-related restrictions are finally being eased, and life is slowly starting to return to how it was before the pandemic. The COVID contact tracing app, one of the most-used smartphone apps amongst Singapore residents during the pandemic, is being phased out. Mask-wearing in outdoor settings is now optional -- a particularly welcome change given the city-state's endless summer.

But elsewhere, COVID is still rocking the tech industry, and providing fresh reminders of how tenuous supply chains can be.

China's three leading smartphone makers are all sharply scaling back their orders to suppliers in a response to falling consumer confidence and supply chain turmoil sparked by COVID lockdowns in and around Shanghai, write Nikkei Asia's Cheng Ting-Fang and Lauly Li.

Xiaomi, the world's third-largest smartphone maker after Samsung and Apple, initially targeted 200 million units this year, up from 191 million units in the previous year. Its target now is between 160 million units to 180 million units. Oppo and Vivo have likewise slashed orders by around 20% for the coming quarters

Apple -- which relies on its vast and sophisticated China supply chain -- had already reduced orders for its budget iPhone.

If there is one winner in the current turmoil, it is Samsung, the world's largest smartphone maker, whose supply chains are primarily in South Korea and Vietnam. Its far smaller exposure to the Chinese market has also shielded it from the drop in consumer confidence there.

Gloomy sentiment and inflation anxiety can be found around the globe these days, but as one analyst says: "Most of the slowdowns are really coming from China now." 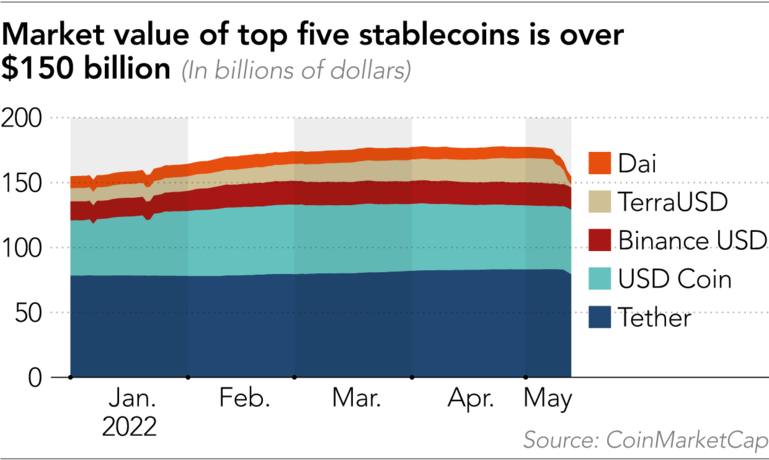 When TerraUSD snapped its dollar peg, holders of the digital token were not the only ones worrying, Nikkei Asia's Wataru Suzuki reports.

TerraUSD is a so-called stablecoin, a token pegged to a fiat currency that acts as a bridge between the traditional financial system and the crypto trading ecosystem. The crash in Terra and a smaller scare for Tether, another stablecoin, has prompted crypto traders to question their investments in everything from bitcoin, the largest and oldest cryptocurrency, to smaller coins. It may also give fresh impetus -- and ammunition -- for regulators to tamp down on the cryptocurrency industry.

SoftBank's billionaire founder Masayoshi Son wasn't looking for any excuses when he announced a historic investment loss of 3.5 trillion yen ($27 billion) for the full year at his Vision Fund, writes the Financial Times' Antoni Slodkowski.

Instead, as if trying to get ahead of bad headlines, he acknowledged investor worries about his missed bets and SoftBank's cash position. He highlighted the company's renewed focus on financial prudence and spoke of a new, more cautious phase for the conglomerate.

To drive the point home, the opening slide in his presentation showed a huge Chinese character: "mamori," or "defense."

"When the world is in disorder, SoftBank should play defense," Son told reporters gathered at the company's new seaside headquarters in central Tokyo.

The Vision Fund losses plunged his conglomerate as a whole into its biggest-ever quarterly net loss of 2.1 trillion yen. Holdings were pummeled by rising interest rates and Beijing's crackdown on the tech sector.

Some analysts were surprised to hear the SoftBank leader talk about being more careful with investments and doing more due diligence.

Son also said he would be slowing investments in China, where SoftBank has heavy exposure through a directly-held 25% stake in Alibaba. The e-commerce group owned by Jack Ma has come under increasing pressure from regulators.

Now, with a bad quarter in the rearview mirror, the focus has shifted to the road ahead: how else SoftBank can raise cash and reassure investors?

If the price is right...

Honda has just released its first own-brand electric car for China, the world's biggest EV market. The Japanese auto giant is aiming to thread the needle in a market dominated at the high end by Tesla and at the more affordable end by numerous local manufacturers, writes Nikkei's Takashi Kawakami.

Prices for Honda's new SUV, the e:NS1, will start at the equivalent of about $26,000 when subsidies are included. It comes with a range of 510km, powered by a battery made by Chinese manufacturer CATL.

Historically, most Japanese automakers bet big on hybrid vehicle technology, and now find themselves lagging behind their European, U.S. and Chinese rivals in the EV market. Honda was no exception. To catch up, Toshihiro Mibe, who took over as CEO last year, has vowed that by 2040 all new vehicles that Honda launches will be either electric or fuel cell.

It is a bold pledge, and all the more surprising given that Honda's global reputation rests largely on its prowess as an engine manufacturer. It will also face fierce competition in China's EV market, where oversupply is already becoming a concern.