Hello, This is Kenji from Hong Kong. The city's attention is on events in Beijing where the once-in-five-year national congress of the ruling Chinese Communist Party is set to kick off on Sunday. The focus is on the highly anticipated extension of President Xi Jinping's reign as party chief, a move that would break with the leadership term limits established by Deng Xiaoping in the aftermath of the disastrous Cultural Revolution.

While Xi is most likely to further cement his power, the congress is expected to address other important issues, including how to cope with the ever-heightening rivalry with the U.S. Just last week, Washington slapped another round of sanctions on China's tech sector.

The congress is also an occasion for China to showcase what it proclaims as its achievements, with special emphasis on the decade-long Xi era. But geopolitical tensions, rising costs and other factors are making the country less attractive for some foreign companies, prompting them to look for greener pastures in regions such as Southeast Asia.

A wallop from Washington

Washington has been ratcheting up pressure on Beijing and its tech ambitions for years, but its latest clampdown has still taken many in the industry by surprise, writes Nikkei Asia's chief tech correspondent Cheng Ting-Fang.

The new export control measures, which took effect on Wednesday, not only curb shipments of advanced chip tools and other American tech to Chinese customers, they also block U.S. citizens and permanent residents from supporting "the development, production, or use" of certain high-tech chips in factories located in China.

This could seriously disrupt China's homegrown chip companies, as many of their founders, executives and staff are haigui, or returnees who have worked and studied abroad. The term haigui is a playful pun on the Chinese word for "sea turtles," but these executives now face a serious dilemma: give up their U.S. citizenship or cut their ties with the Chinese chip industry.

"The new regulation caught many of these Chinese American executives off guard. ... Many of them have family overseas in the U.S. and have assets and properties in the U.S.," an industry executive who spoke under condition of anonymity told Nikkei Asia.

Over the past year, Chinese investment and tech groups including Sequoia China, Tencent and ByteDance have plowed hundreds of millions of dollars into startups that develop digital influencers.

International brands from Bulgari to Pandora are hiring virtual idols as their ambassadors in China, the world's largest fashion market, while cutting ties with real celebrities forced to quit public life because of scandals.

Local governments are also hoping to capitalize on the avatar frenzy, with Beijing rolling out China's first dedicated development plan for the industry in August. It has set a goal of building it into a sector worth 50 billion yuan ($6.9 billion) and cultivating 10 companies with an annual revenue of more than 1 billion yuan by 2025.

But accusations of worker exploitation against ByteDance, which emerged in May following the suspension of a core member of animated girl group A-Soul, have drawn new attention to the treatment of human performers behind virtual characters and proved that the industry is not entirely scandal-proof. 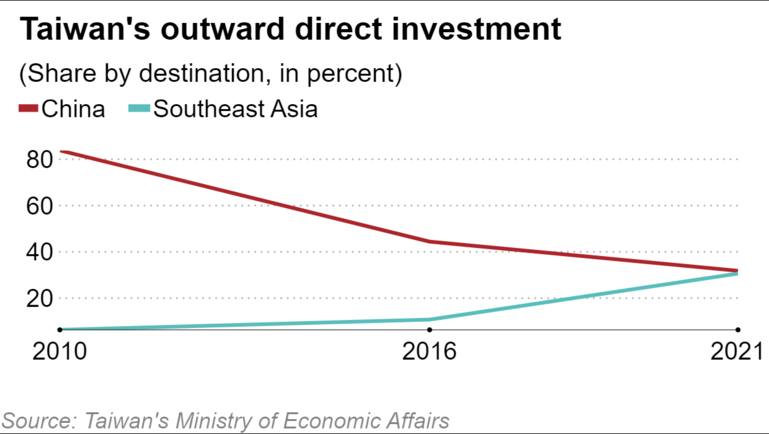 With pressure from China - including open military threats - intensifying, Taiwanese businesses are moving to reduce their presence on the mainland, Thompson Chau and Cheng Ting-Fang write for Nikkei Asia.

A survey of over 500 Taiwanese executives by American think tank CSIS found that around 60% of them have either moved part of their operations and sourcing away from China, or are considering doing so. And Southeast Asia is emerging as a leading alternative.

Encouraging local companies to diversify away from China has been a major initiative of Taiwanese President Tsai Ing-wen since she took office in 2016. The survey results indicate this policy may be bearing fruit.

The cost of parts for the iPhone 14 Pro Max is $501, which is $60 higher than for the iPhone 13 Pro Max released last year, according to calculations by Tokyo-based research company Fomalhaut Techno Solutions.

Meanwhile the contribution from U.S. suppliers by value rose to 32.4%, up almost 8 percentage points compared to the previous model.

And that is not the only shift in Apple's supply chain. While most iPhones are still made in China, production is gradually diversifying to places such as India and Southeast Asia against the backdrop of U.S.-China trade tensions.